Because 90% of the company’s employees live on the farm they are considered as a single unit with a high degree of insulation from the broader public beyond our boundaries.  Obviously the regulations state that they should be confined to their homes but the farm does have dispensation as an agricultural enterprise with food production as its priority.  Therefore employees doing land preparation, doing baling of hay, land preparation for summer crops and livestock management are all on duty.  Our staff have been well briefed regarding the threats that exist and are going about their business in an intelligent way while at the same time remaining well separated from each other.  In this update we allow our visitors to spend a typical day with us on the farm at Sandstone Estates.

Firstly lets deal with our livestock.  We have many different categories of livestock and they are oblivious to the threat that exists to humans and carry on with their lives in a very benign way.

We have a donkey sanctuary which provides a safe refuge for donkeys that are currently under threat worldwide.  The pictures below shows just a few of our donkeys including the rare bont variety i.e. multi coloured.

LIVESTOCK:-
Livestock is a big part of Sandstone’s agricultural strategy.  We have a large commercial herd of over 1000 cattle.  We started with less than 100 ten years ago and we have built the herd up very satisfactorily.  The pictures below are two 12 month old calves which have been weaned and are excellent examples of the quality of our herd.

We realised that just a little over a year ago that Sandstone is an excellent farm for sheep.  Grazing sheep is complementary to our cattle operations.  Sheep are also an excellent tool for the farmer who wants to control weeds in lands that are lying fallow.  The farm is capable of carrying some thousands of sheep but we started small and we are building up the numbers rapidly.  Just before this web update we recorded three lots of twins in one night.  Long may that continue.

Sandstone is also unique in the sense that they tolerate large herds of Springbok, Blesbok and a wide variety of other wildlife on the farm.  From our experience they do no crop damage and are very happy to utilise the grassland areas which they share with our sheep and our cattle.  The farm is big enough to accommodate all of them satisfactorily.  The photographs show Springbok, Blesbok and even guinea fowl co-existing very happily.

We have a substantial maize crop which has been blessed with very good weather in fact ideal weather for maize growing purposes.  The crop is far advanced, nearly fully formed and beginning to harden.  Our rains came very late last year and we were only able to plant in the early part of December.  In truth we should have planted more because although there is a theoretical cut-off date for maize planting the seasons have definitely moved and we probably had more time than we realised.  However we are well pleased with the crop that we have. 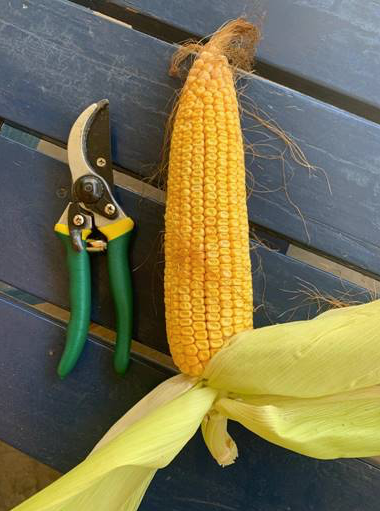 The most dynamic operation on the farm at the moment is the baling of Lucerne, eragrostis and eragrostis hay for sale to Lesotho.  Many farmers in Lesotho are reliant on us for over winter feed and we are well on our way to achieving our target of 5000 bales of hay.  This is kept in under cover storage and is sold to Lesotho farmers from late April through until October/November.  Obviously this is providing stocks last.  We are also unique in that we bale maize residue in very large volumes which is an excellent over winter cattle feed.  That will take place in approximately July when the current maize crop is harvested.  For those who understand that we are also a heritage site, have a look at the 1935 Ford V8 in the lands working hard at 85 years old.

A typical days baling can last up to 14 hours as they work late into the night in order to achieve maximum productivity. 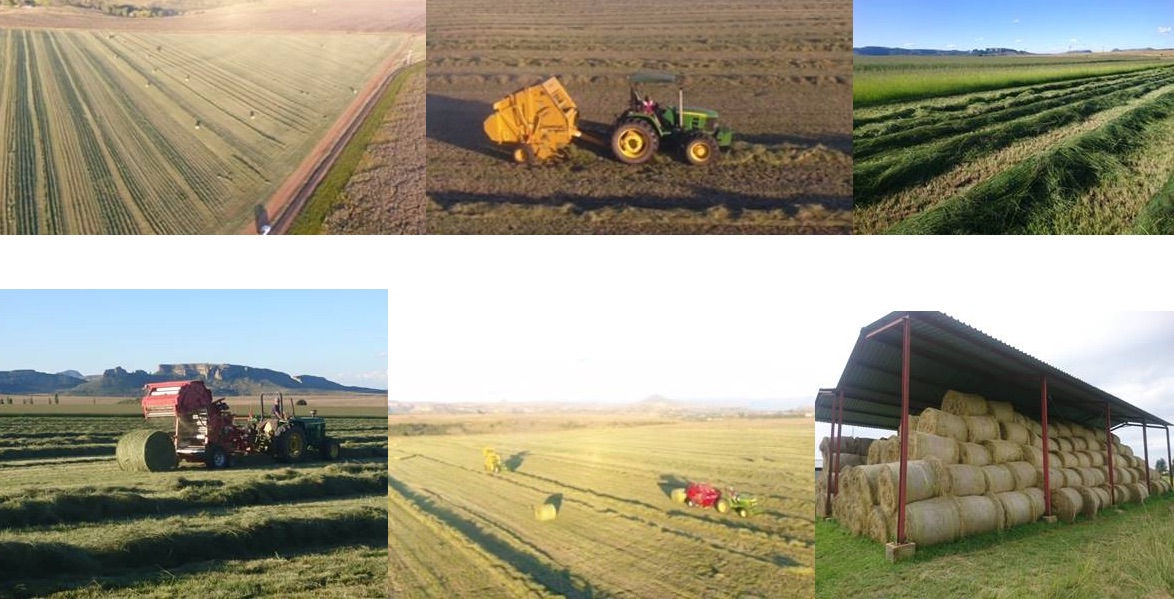 The weather continues to be very satisfactory from an agricultural standpoint.  This storm came in quietly over the weekend and gave the farm a good soaking.  There is no doubt that weather patterns have changed and we can expect the seasons to start later and to end later as well.

Almost Sandstone’s signature and featured in thousands of photographs, the Cosmos is blooming at this time of year.

1935 FORD:-
Sandstone is unique in the sense that its heritage operations are closely interwoven with our agricultural enterprise.  Wherever possible we use ancient machines to accomplish tasks that modern machines do not do very much better.  Our 1935 Ford V8 is an excellent and rugged farm run about which saves the farm purchasing a new vehicle to do the same job.

While all of this activity is taking place out on the lands our very competent workshops are hard at it.  They constantly deal with mechanical upgrades and in fact complete rebuilds of machines.  This Caterpillar D8 was found abandoned by the farm where it had apparently laid untouched for many years.  We were able to rescue it using our big HET tank transporter with 2 x 100 ton winches which we needed to pull it on board.  It has now been mechanically brought up to full specification by our CAT specialist Deon Meyer and it is standing outside our panel beating and spray painting department ready to start work as new.

After the closure of our Bloemfontein works all our restoration facilities were brought back to Sandstone Estates and are now on the farm.  An exciting project is the restoration of NGG16 No. 155, a gas converter locomotive which was developed by a number of specialists but brought to a high level of implementation by the late Phil Girdlestone from Alfred County Railway. You can follow the full story of 155’s restoration on our regular web site updates

We are also building a new series of traditionally designed coaches and here is a picture of Thinus Dennis who’s been responsible for the construction of this coach. This is the prototype for official certification. 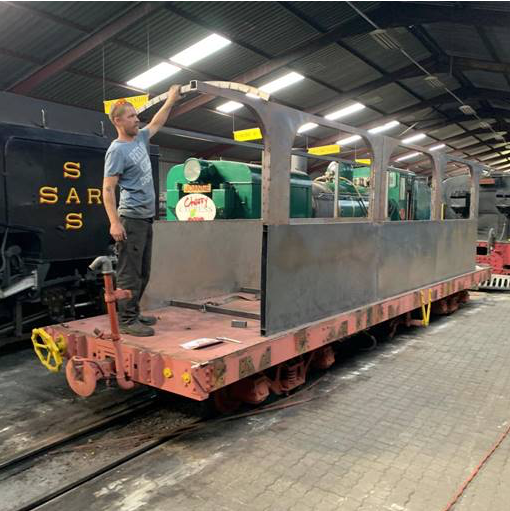 The engine units of number 155 prior to final restoration and painting. 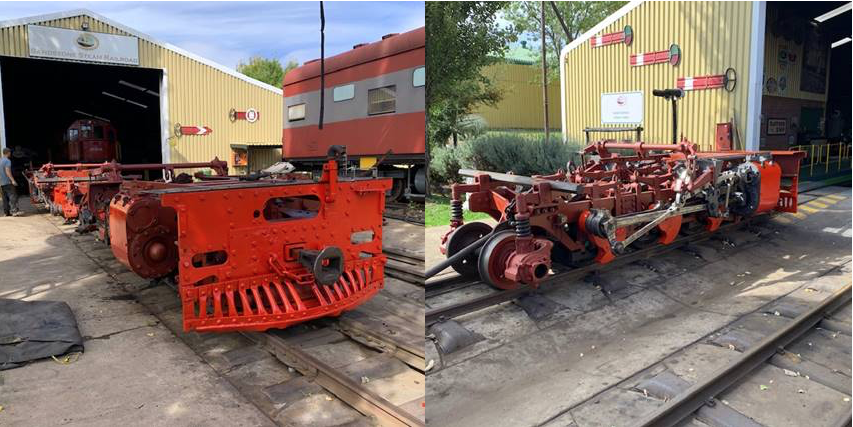 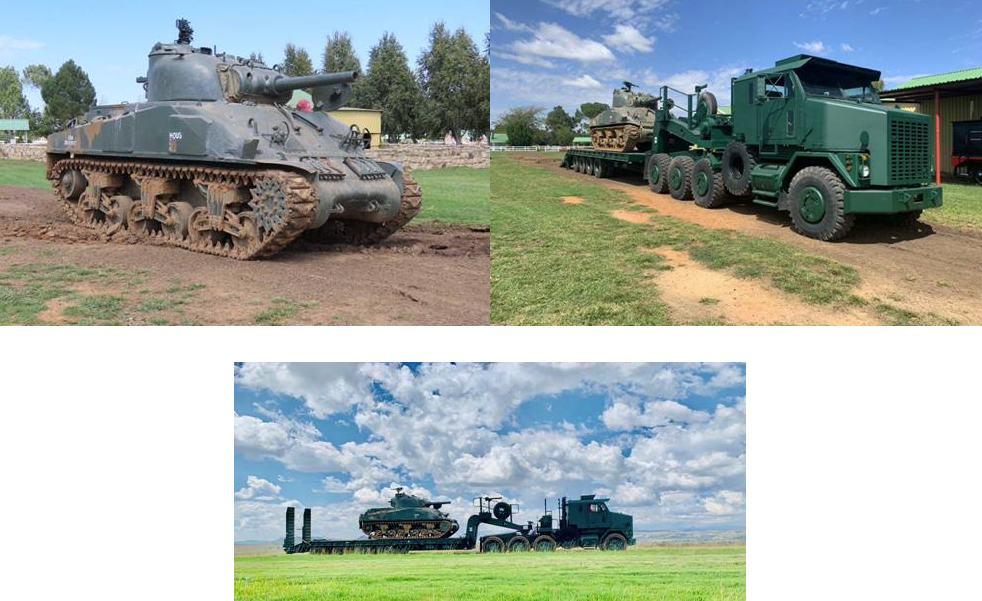 You can read the full story of the Oshkosh HET on the web site:
http://sandstone-estates.com/index.php/military-vehicles-59/40-military-vehicles/3455-sandstone-s-new-het-heavy-equipment-transporter

So as you can see Sandstone is very active during these unfortunate times, watch for further updates.