A team went to the vessel on Saturday 18th December 2010 to start loosening off pipes which pass between the hull and the superstructure. As nobody had a camera with them, they just planned and loosened bolts off on flanges, but removed nothing. They could report, though, that there was no sign of further nesting on the vessel by the cormorants. The birds were still around, sitting on the floating jetty alongside or swimming nearby.

The next opportunity to visit the vessel was Saturday 27th December. We were just three members, but equipped with marking pens, spanners, sockets, power bars and ratchets, release oil and most importantly, cameras.

Our first surprise was that the top of the mast had come down, rusted away at the base. It brought down the steel forestay, from which our shade netting was hanging, so that was lying loose all over the foredeck. 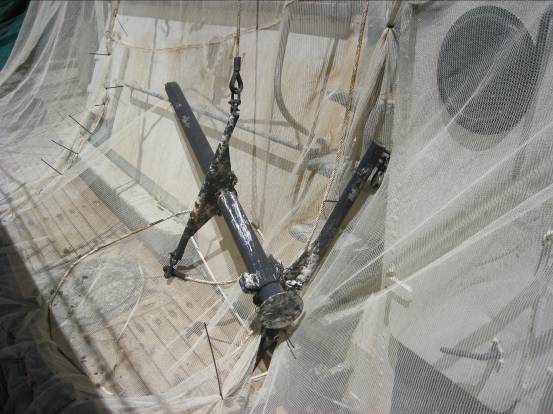 The fallen top section of the front mast.

While Hermann and Gavin picked up where they’d left off during the previous visit, I sorted the keys and locks out. Each lock was numbered and up to six keys in the big bunch were matched up with that lock. Keys in turn were notched around their heads according to that number. 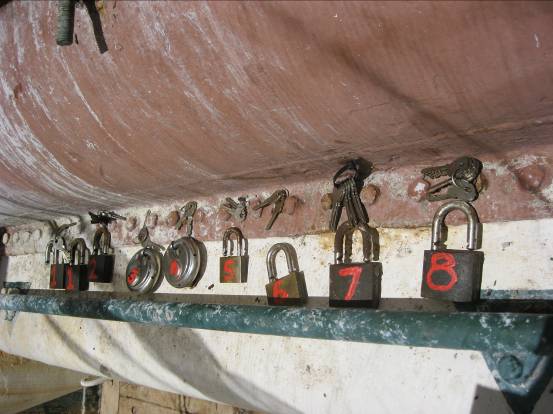 The system we decided on for numbering the pipes was to allocate a number for a pipe in the order in which it could be dismantled from the vessel, starting from No 1 (Port). Assembly will be in the reverse order. In this way we won’t be left with a pipe which we can’t get in behind others. We marked the top end of each pipe A and the bottom B. So the first pipe, shown below has a flange at the top marked P1A. The flange to which it is joined has the same number.

Hermann has been studying the drawings at home and plans to make some copies. He now has an idea of the function of various items in the engine room, for instance the feed water heater. We could see it was a heat exchanger of some kind, now we know what it is called, and its function. 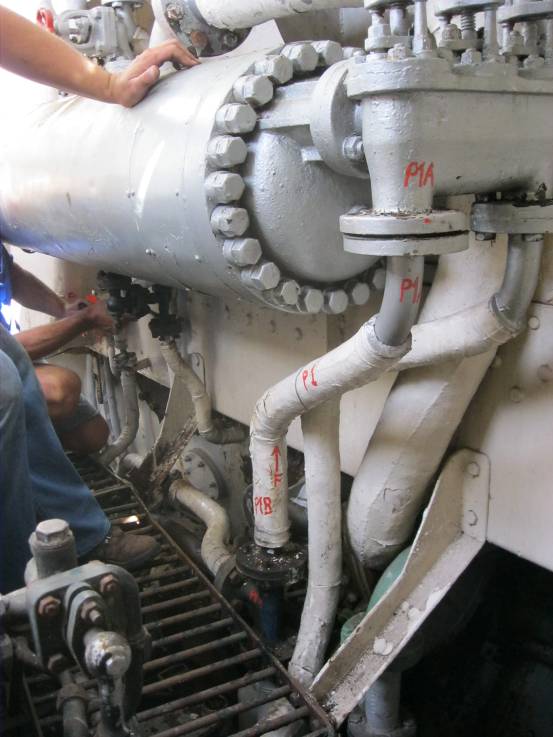 Sometimes we had to remove up to four other pipes to be able to remove one which passed the ‘cut-line’. Numbers were only allocated once we were sure the pipe could be removed completely from its position.

Some bolts and nuts came out easily; some took all our strength and ingenuity to remove. Sometimes they were difficult to get a spanner on to. Sometimes these were the tightest! It is certainly a lesson to us to apply anti-seize paste when reassembling. 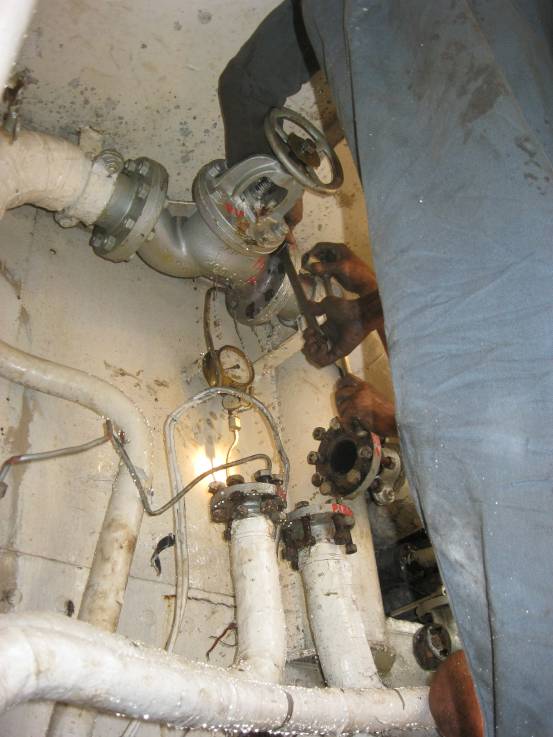 At each stage, we took photos to help us with the assembly. By the time we’d removed 15 major pieces of pipework we called it a day. We were pretty tired from struggling, working in cramped spaces but thanked our lucky stars we weren’t pitching around on the open sea!

We were surprised when loosening off this 100mm steam valve that we were showered by a cascade of water. The valve is presumably water tight; otherwise this water would have escaped when we removed the tee below. The valve mentioned ‘steam’ and ‘atmosphere’ on the disc, so we realised this was for blowing off excess steam manually. We followed the pipe ‘to atmosphere’ and found that at the top of the funnel, and the pipe was open. This was accumulated rainwater! Before leaving, I climbed onto the top of the funnel and taped over the outlet. 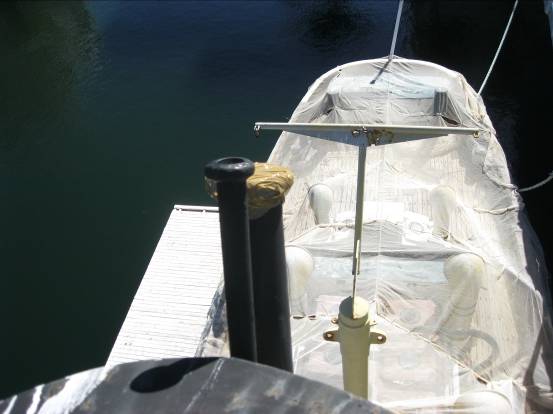 View of the stern, all covered in shade netting from the top of the funnel. The steam outlet is taped over.

We can now report that the Port side of the engine room has a clear cut line! Gavin has a full set of keys now, and intends returning between jobs during this week to proceed on the Starboard side.