Sandstone has just completed a restoration of the Oliver 1950 tractor. Oliver Tractors came about from a merger of four companies in 1929 and continued to manufacture tractors until acquisition by the White Motor Company in 1960. The new company continued to manufacture tractors up to 1974 when the Oliver name was dropped. Interestingly we have a White M5 military vehicle from WW2 in the Sandstone collection.

FIAT tractors were also marketed under the Oliver name in North America during the mid-1970s, such as the Oliver 1465 tractor.

This model was designed as an agricultural tractor and mostly marketed as such in Oliver’s green and white colours. The industrial version was a wholly Oliver designed alternative, and contemporary photos show it in yellow with a heavy duty drawbar and no 3 point hitch, exactly as Sandstone’s example.

Interestingly for a model launched in 1964 it was available as a two and four wheel drive. The four wheel drive appears to be mechanical, although there are fleeting references to a hydrostatic front wheel assist option, much more common in the ‘60’s.

Our tractor expert, Chris Wilson, has examined a lot of photos and thinks Sandstone’s version was originally four wheel drive, but has been converted to two wheel drive, presumably due to a failure in the 4wd drive train.

The wheelbase of the 4wd, at 85”, is short for a tractor of this power, which probably reduced its traction and explains the massive ballasting on the rear wheels.   The weight, un-ballasted, was approximately 6 tons.

The transmission was 6 speed, with a partial power shift option, Hydra-Power, on each gear giving 12 speeds in total. In service many of the Hydra Power boxes were “locked up”, due to un-reliability.

Our photo gallery shows the Oliver as restored and on its first drive at Sandstone with a compaction roller. 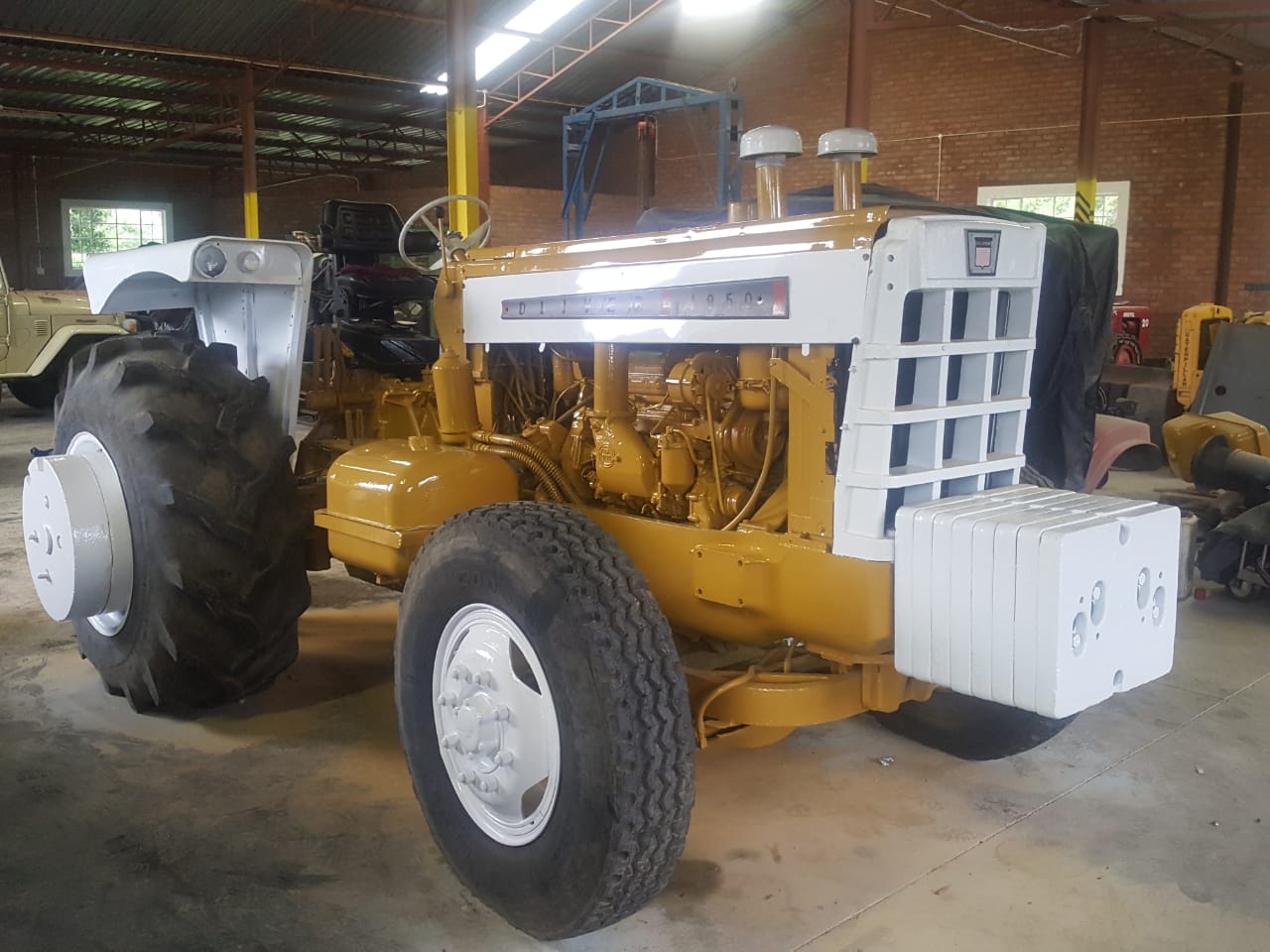 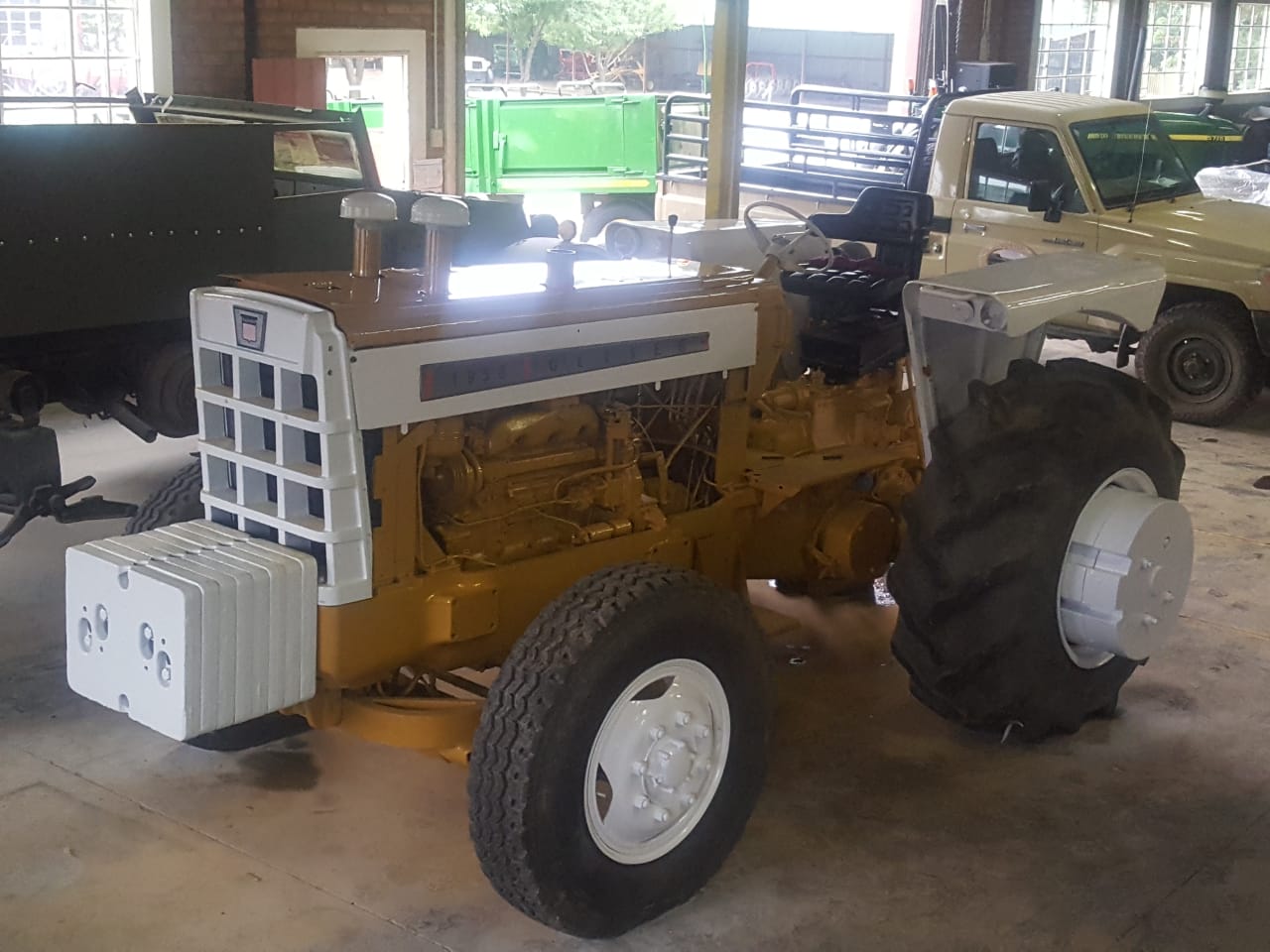 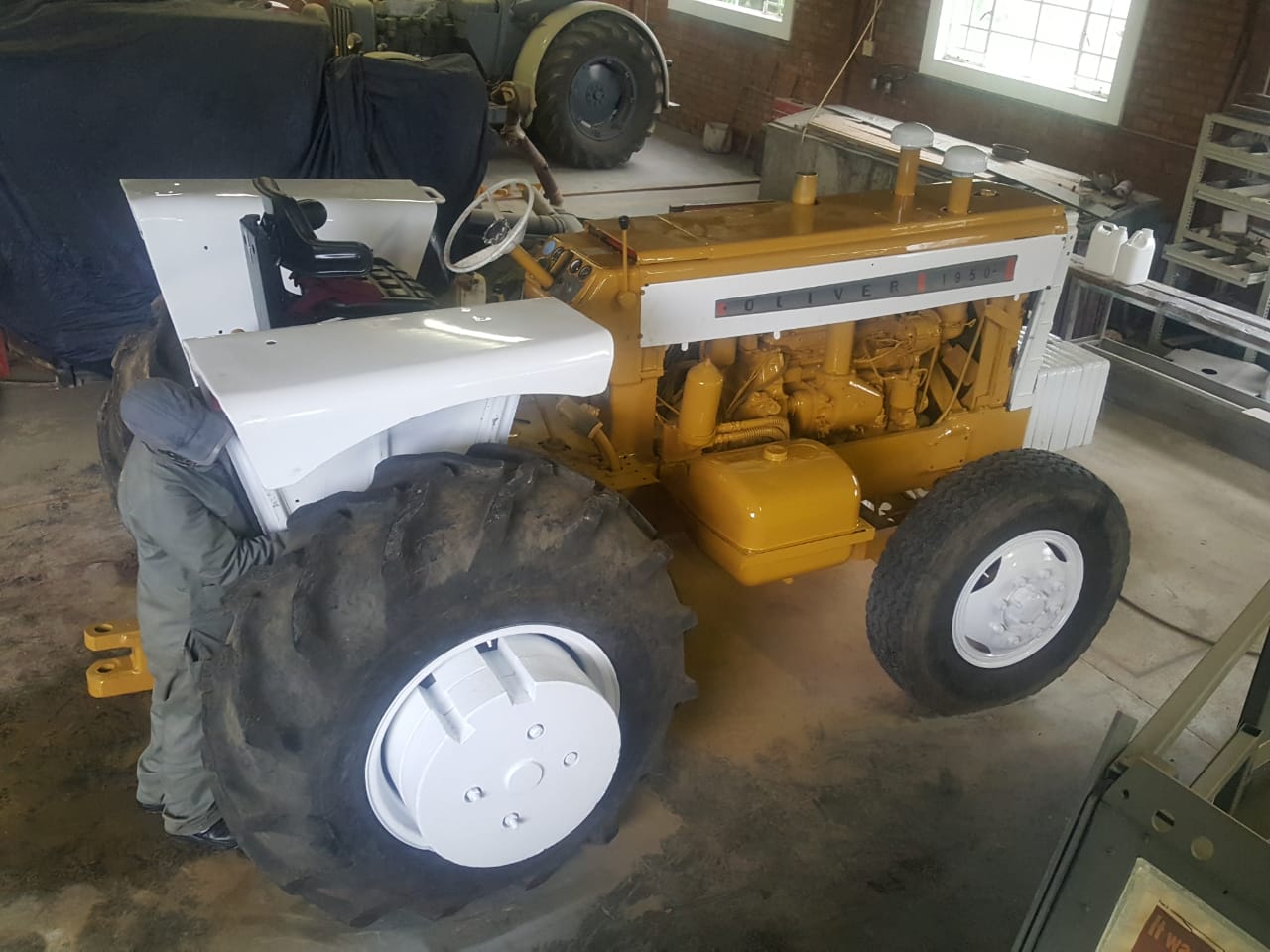 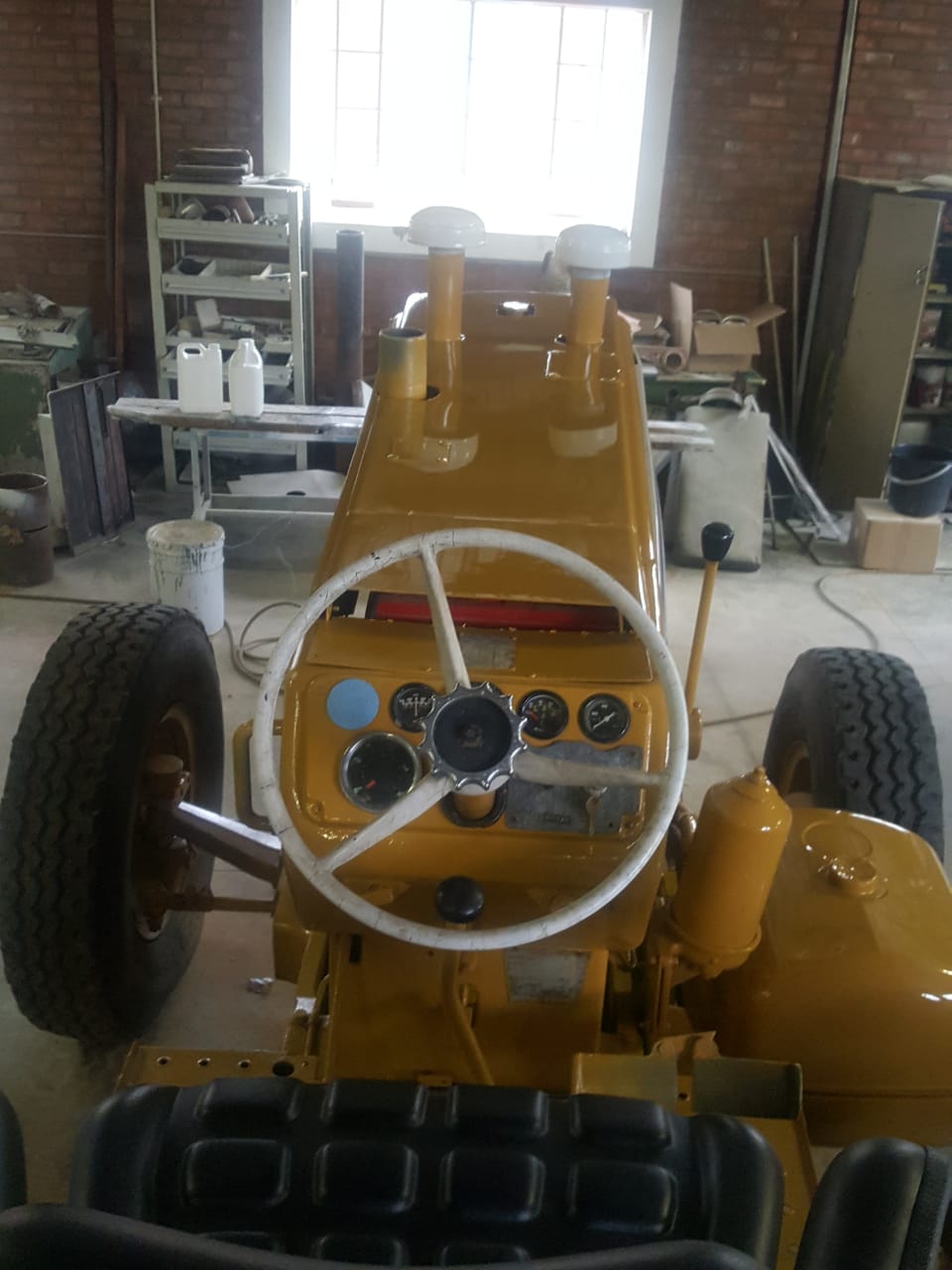 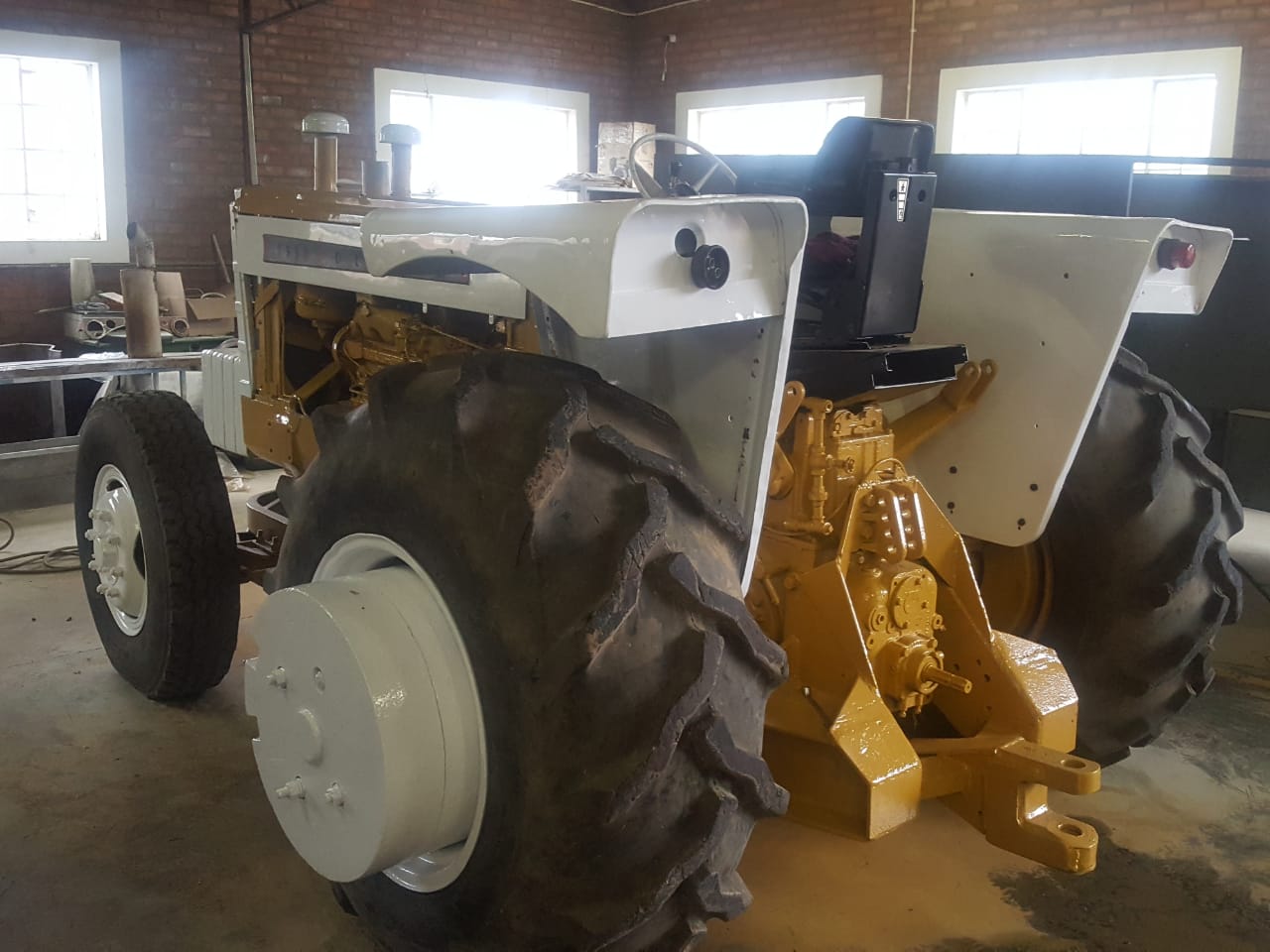 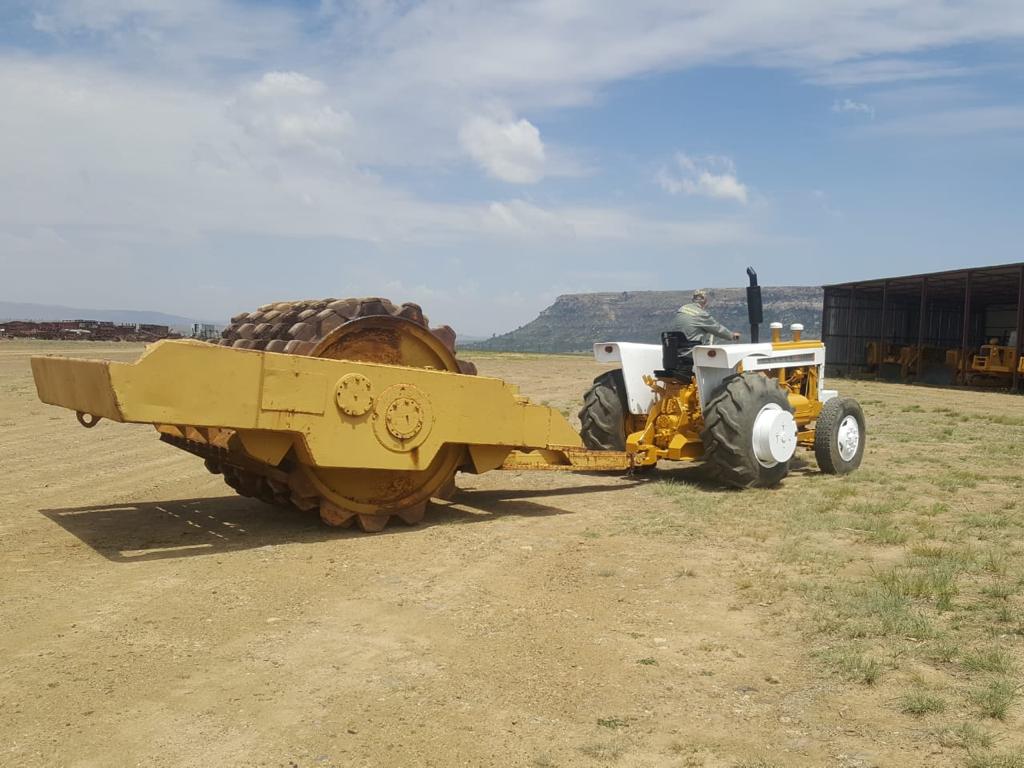 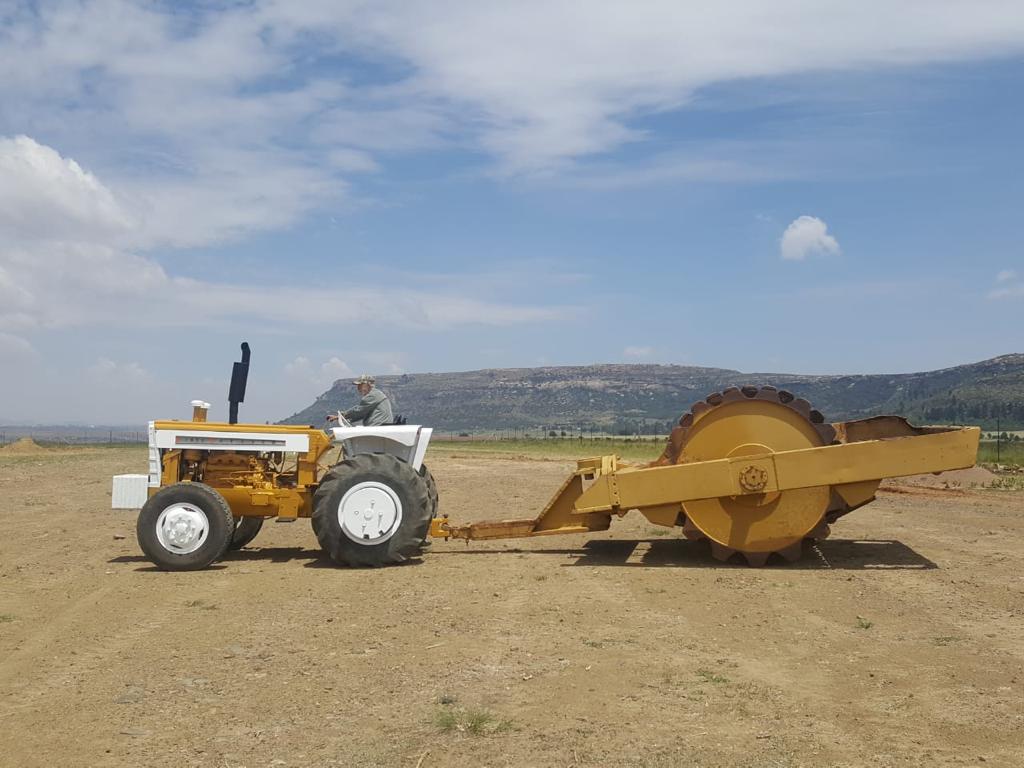 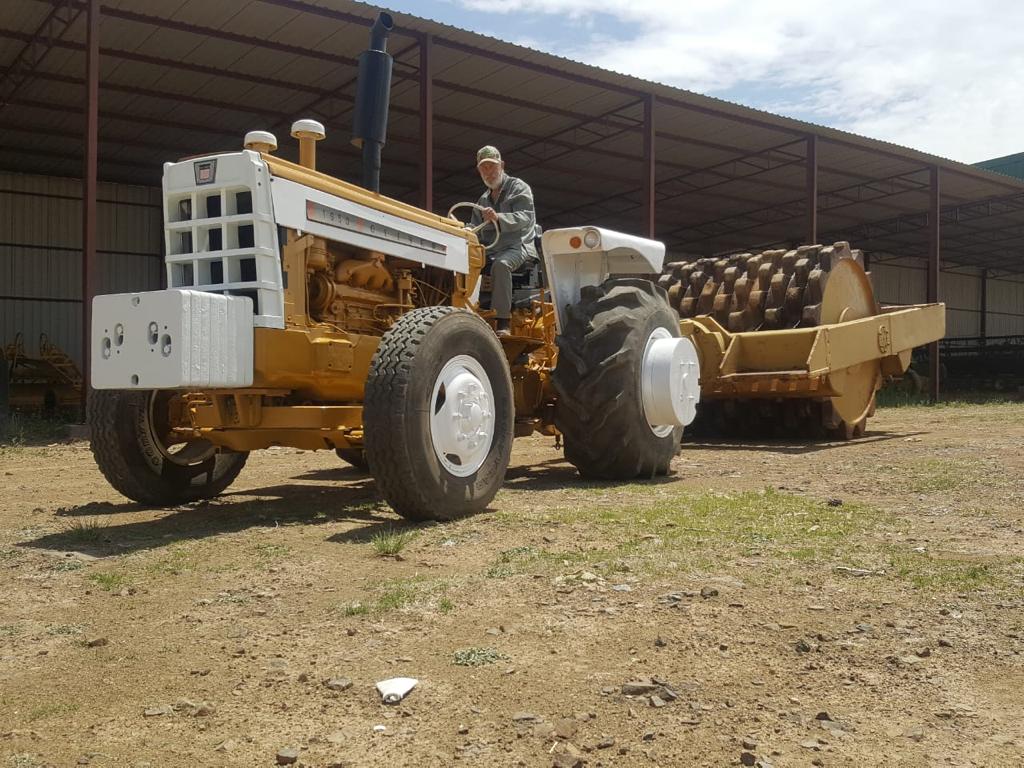 John Deere celebrates 100 years in 2018 and one of the earliest examples of a John Deere tractor in South Africa is Sandstone’s 1924 Model N, Waterloo Boy. This has been loaned to John Deere for the duration of the largest agricultural show in South Africa and is on display at their stand at NAMPO 2018 in Bothaville in the Free State.

Sandstone is a major user of John Deere equipment and wishes John Deere another successful 100 years. 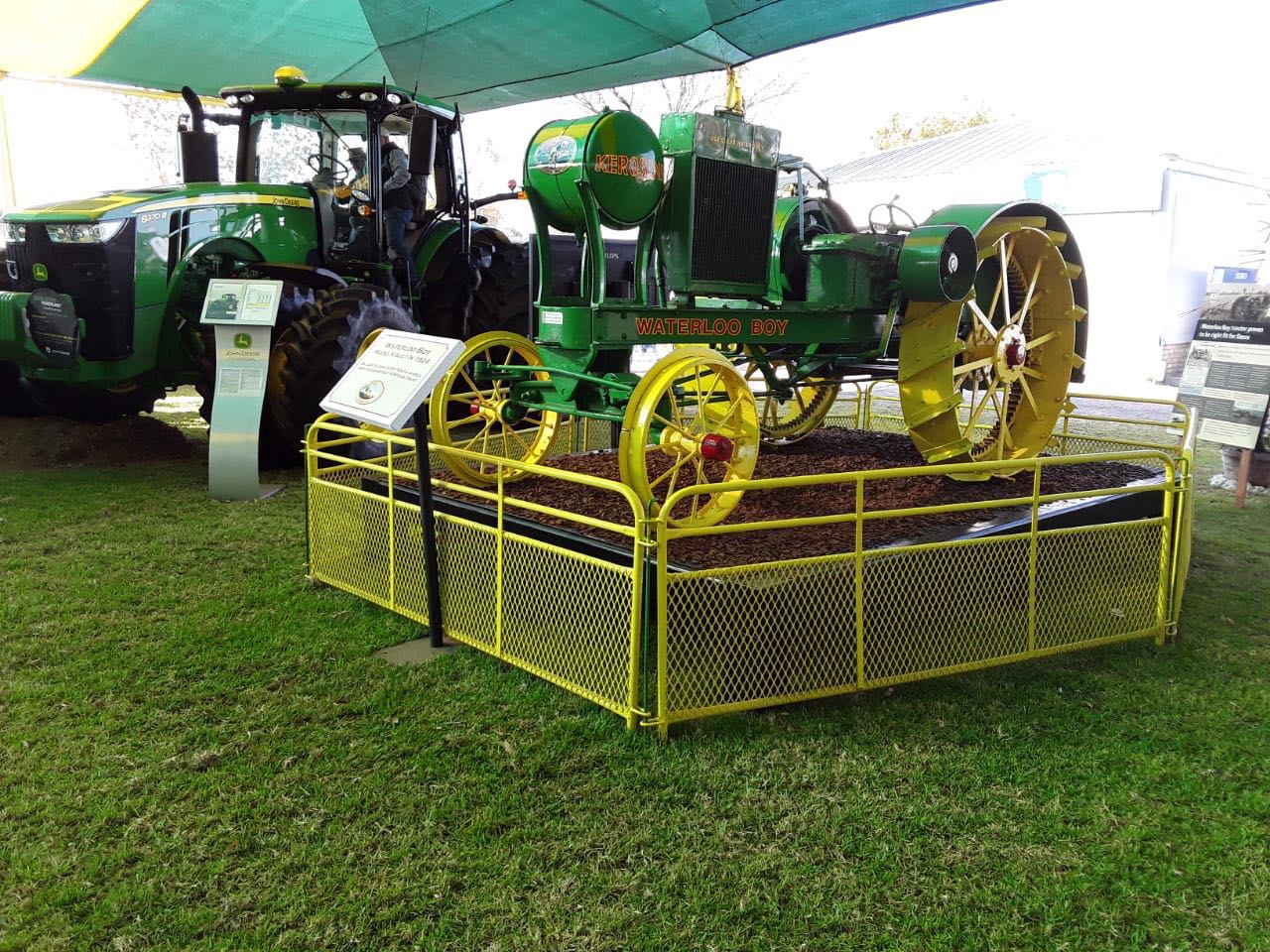 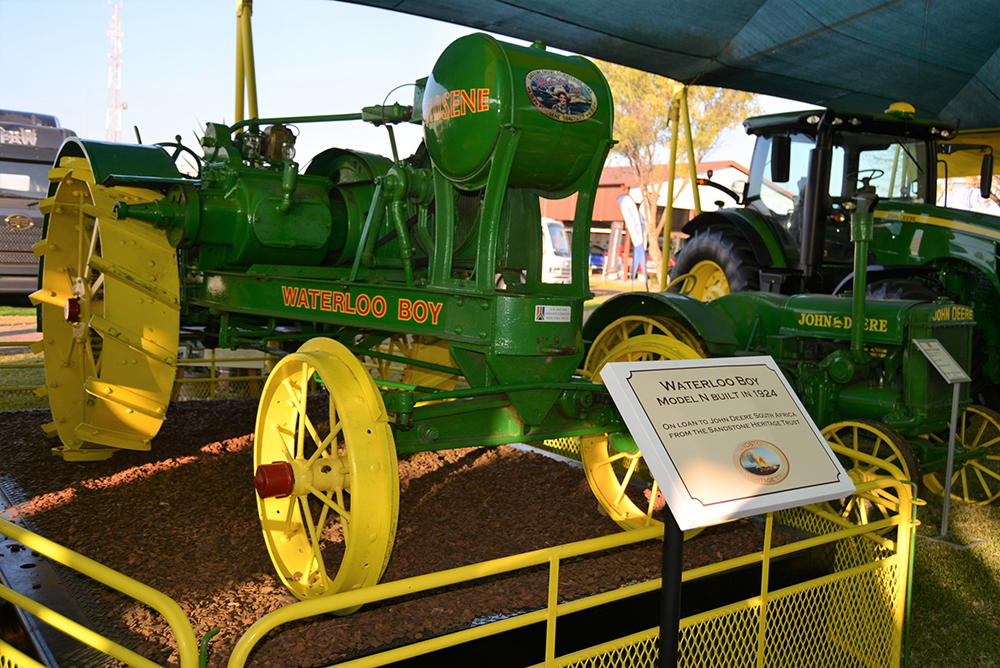 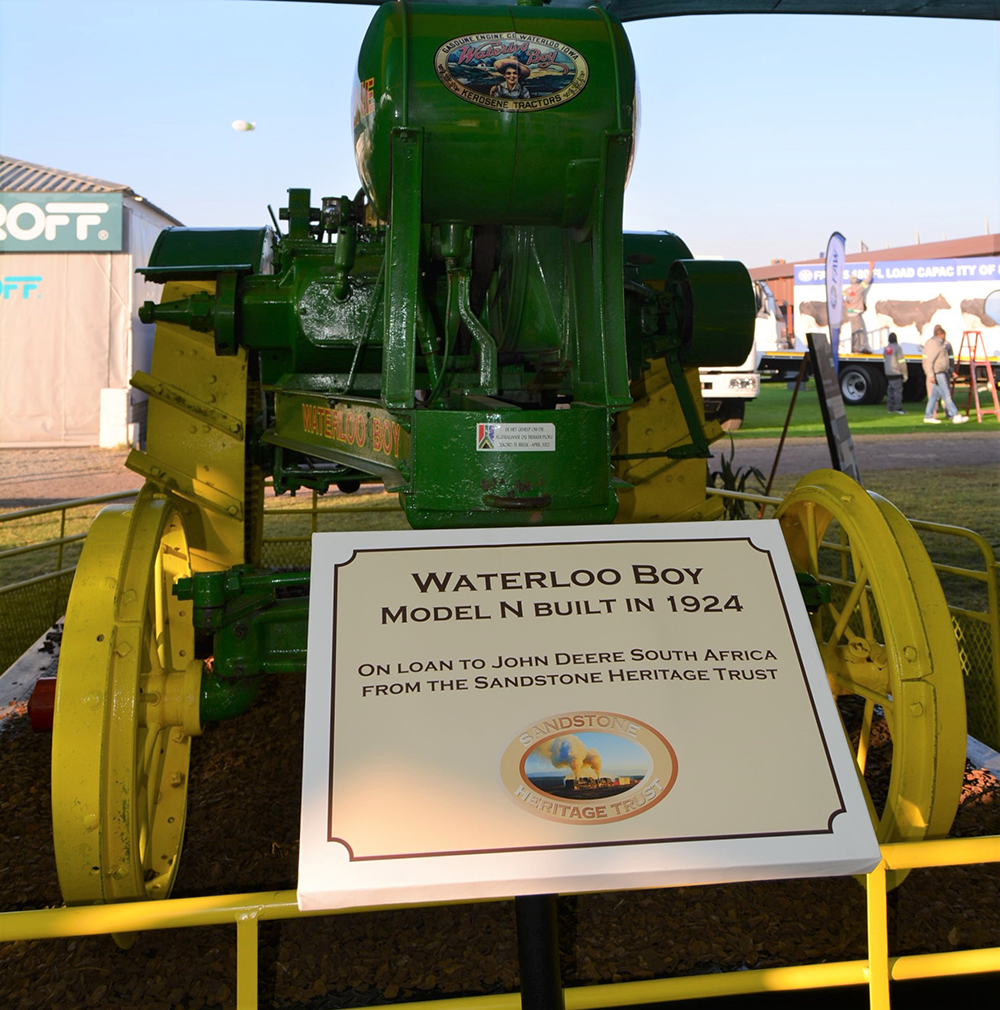 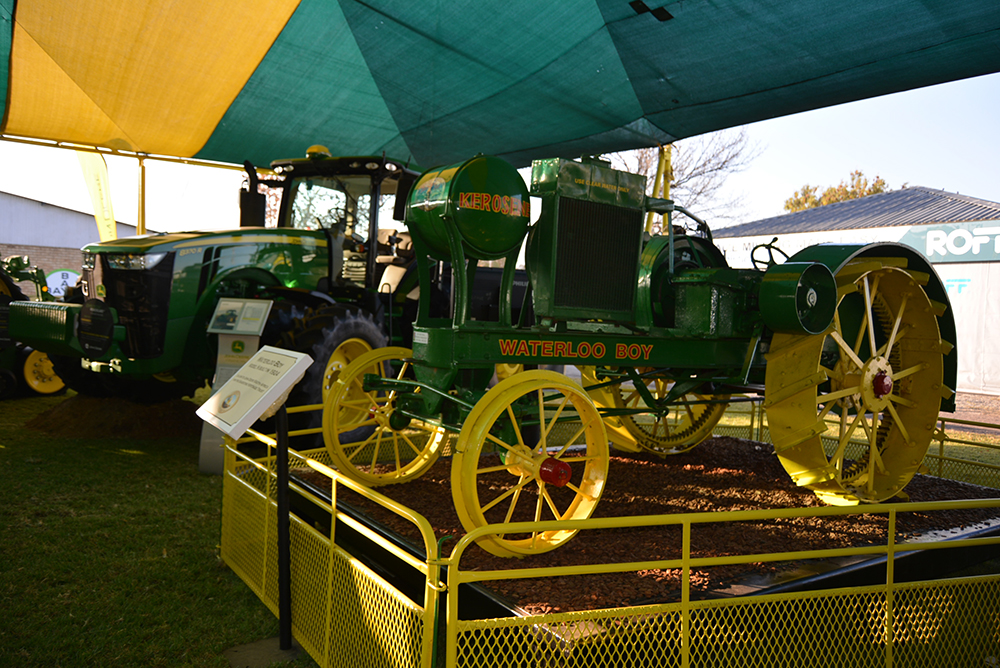 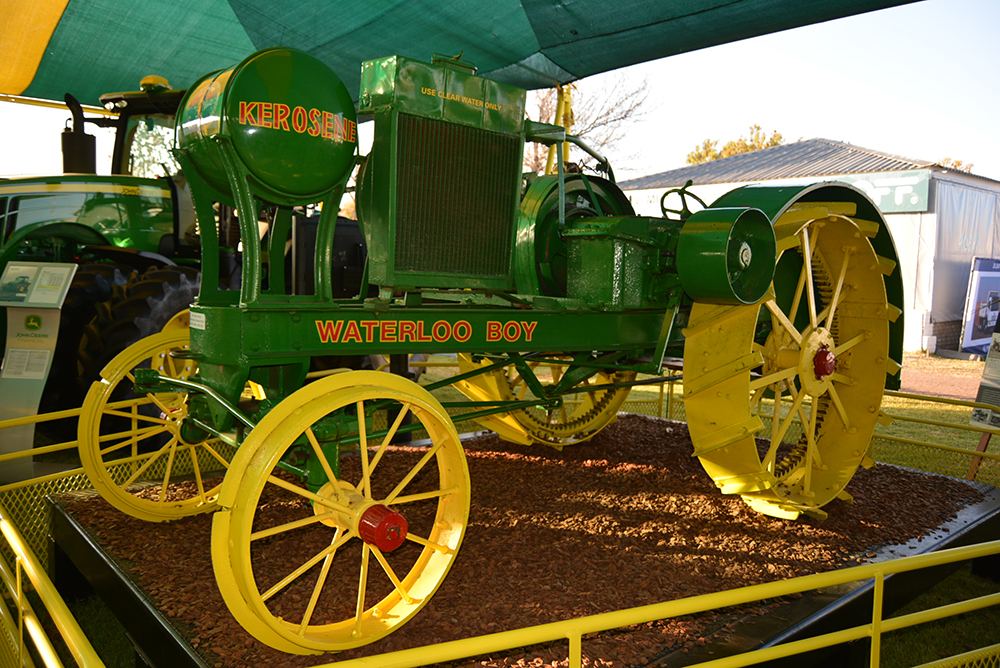 Although Covid is no longer an issue, we were obviously unable to host the number of events that we…

The story of one plate.

We recently featured, on the 19th May, the presentation of a large Skoda works plate by Svatopluk (…

Read more: The story of one plate.

Oxen and the Soya harvest, an historical approach. A real step back in time!

Read more: Oxen and the Soya harvest, an historical approach. A real step back in time!

A present from Skoda.

One of Sandstone’s long time European supporters is Svatopluk Slechta, an engineer from the Czech Re…

Read more: A present from Skoda.

Sandstone has two of these fascinating steam powered drilling machines. Both are with a rest…

Torsten and Ilona Eggert from Germany arrived at Sandstone on Freedom Day, 27th April, with their Ha…