An invaluable contribution from Folker Streitberger regarding the background to the Deutz logo.


An invaluable contribution from Folker Streitberger regarding the background to the Deutz logo.

In 1936 the then "Humboldt-Deutz-Motoren AG" took over the vehicle production plant "Fahrzeugfabrik C.D. Magirus AG" in Ulm, manufacturers especially of fire truck vehicles. A new logo appeared, showing the "cathedral" and below that the names in 2 lines "Magirus" "Deutz". This was also the name for the Deutz truck as you may recall. But the cathedral is not the Cologne Dom, it is the Munster of Ulm, with 1 tall spire and 2 smaller ones, whereas the Koelner Dom has 2 tall spires and 1 small one as your picture shows so nicely.

I think that at that time the "cathedral logo" was only used for the truck section of the company. Before that the name "DEUTZ" was used in a diamond- or rhombus- or lozenge-shaped field (view Deutsche Stationaer Motoren page 62 for an example).

The cathedral symbol became the official company logo only in 1964, when Deutz celebrated its centenary.

In 1938 Kloeckner Works from Duisburg came into the company and the name changed to "Kloeckner- Humboldt-Deutz AG, or KHD for short. (That's the name that I grew up with and lived with for most of my working life).

The last name change came in 1997 to "Deutz AG" and the logo was the cathedral in red, DEUTZ underneath in black , red underlined.

I still remember the "DEUTZ" in the diamond-shaped field on sheet metal plates, nailed to the engine boxes as they arrived by us from Cologne. But also painted on, with the name DEUTZ in a symbolized globe and written underneath "for the world".

The above is naturally my private interpretation of the subject and not the official DEUTZ company explanation.
Below is a copy of part or an original watercolour "Alt Köln" (Old Cologne), which makes the explaination more obvious. 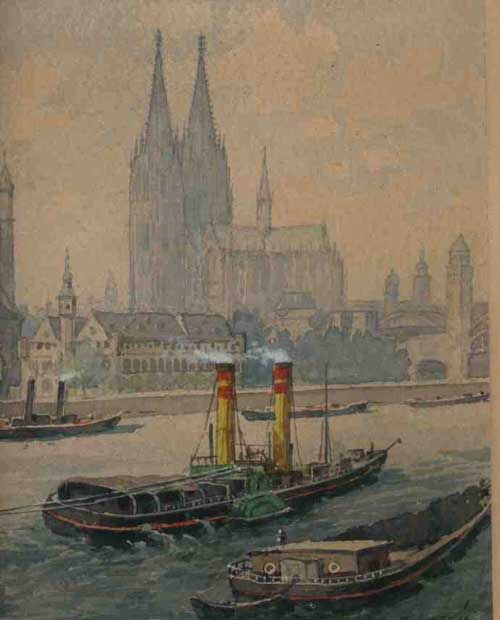