The deep meshing of the primary gears was sorted by packing the right hand side of the crankshaft main bearing to align it correctly in the frames. (It was 250thou to far back). So hopefully when the secondary shaft-bearing sleeve is replaced this meshing will be somewhere near correct.

Next Rob Houghton made a ‘dolly’ to drive the sleeve out of the diff spur.

With a few blows of a sledgehammer on the ‘dolly’ the sleeve came out, it was so bad that I intend to keep it as a momento!

Rob is also making a new sleeve and pin for the water pump and that will be fitted in due course.

2135 is still fighting us; I have only today found someone to machine the second shaft, without the need for removing the two gears from it.

This latter we tried to do with the aid of an enormous puller, with a tremendous force and shocking it with a sledgehammer, not a movement.

Methinks this has never been off! So leave well alone.

The differential shell bearing came out OK, but the second shaft bearing wouldn’t also budge. So I decided to collapse them. I cut a slot into the longitudinal shell and it collapsed and came out quite easily X 2!

And to make matters worse they were both brass (Good as I could saw them more easily), but they should have been bronze!

So my new set, which is already roughed out, are all bronze, not cheap though.

Last Sunday I removed the chimney, in order to have a new rim fitted by my friendly local blacksmith, and all the rolls were cleaned in readiness for repainting.

The bevel gears from the differential, which were machined too big for the drive shaft have been chrome plated, (inside diameter only), and reground to the correct size are now ready, and machining of new keys are well advanced.

My young apprentice William, has had his eyes opened with all this heavy engineering, but he seems to love every minute of it.

The weather was poor here on the Sunday thus preventing work progress on 2135, but did go and find out how far my friend Rob had managed to get with the fitting of the new bearings...

One bearing has been fitted and is ready the other two should be ready by the end of this week, hopefully.. The new ‘key’ has been made for the bevel gear to drive shaft and is in place but still needs a bit of ‘fettling’!!

This we did, after the third attempt, only to find that the bearing housing nuts needed to have about an eighth of an inch grinding off them.

We also fitted, with heat persuasion and a 7lb hammer, the final half-inch that was needed on the main axle bevel drive gear.

So the next job, which I tackled on the Sunday, was the grinding off of the five housing bolts, and some cleaning up, on the Sunday..

Well the weather then deteriorated, ‘good and proper’, cold wet and windy.

However not to be deterred, the progress on the roller had been three steps forward and two backwards. It’s still fighting me!!

Where were we, at the bearing honing, I think?

Rob completed that by honing the differential gear bearing for an 8 thou clearance on the drive axle.

Apparently the rule of thumb is 1 thou for every inch in bearing diameter, plus1 thou.

After much heaving and rigging with trusty chain block the ‘diff’ gear went on and was positioned, next we battled with the gear guard, eventually positioning it where we ‘thought’ it should be..Next we rolled the rear wheel into position, adjacent to the rear axle and jacked the rear of the engine until it lined up, we then ‘paddled’ the rear wheel on to the shaft. Once on enough we jacked the engine some more and allowed gravity to do the work. The wheel easily slid on, all 11/2 tons of it..

Next I offered the collar to the shaft, 1/8 inch out!! So checked the collar on left hand side, the shaft had moved 1/8 inch when we had driven on the bevel gear!!

What now?? Swop collars! Perfect!!, but positioning pin holes out of line!

Now we either redrill the collars or grind about 1/16 inch off the end diameter of each pin, took the easier option, ground off the end of each and drove the pins home and split pinned them. OK..

Replaced axle covers and awaited the return of the gear selector mechanism, that Rob was refurbishing. All pins and bearing surfaces were to be replaced.

Selector was returned one Saturday morning, and I then reinstated it in the correct position

Looked good, but toooo tight, almost impossible to change gear. The interlocking toggle would not drop, allowing the gears to be changed. The main reason for this appeared to be that during its service, it had been welded up to try to take up the slack, so by replacing all the sleeve bearings it was now far too tight. So I had to strip the mechanism and do some ‘judicial’ filing, to the toggle. But where to file, that was the question. I eased it considerably, but was still not completely happy. This needs further attention.

Now the weather forecast was looking ominous, the Saturday was fair, and then it was downhill all the way!!

So I took the decision to steam and road test on the Saturday and then drive it into the barn for ‘winterising’!!

Saturday dawned a beautiful day, (But we knew it would deteriorate by late afternoon), and steam was raised, and all looked good.

On its first movement it was apparent that some part of the gear guard was catching.

In low speed it was not too bad, but by the time we changed to ‘fast’ gear the noise was horrendous! As time was getting on we decided to drive it into the barn, for further investigation.

It is always tricky driving it into the barn as the chimney only just clears the barn roof lintel, but when the engine timing is not set correctly, also, it becomes more difficult.

We did however make it OK on the second try and ran it on timbers to keep the rolls off the dirt, and chocked and made it secure.

It was only at this time did my apprentice William come to me with a rather large ‘stud’ with a nut on the end of it!! He said “is this off the roller??”

Shugger, I said, or words to that effect, it’s the stud from the bottom half bearing of the main axle!!!

On investigation the threads in the cast iron housing had stripped!! And the stud had dropped out!!

At that we decided to call it a day!, and sleep on the various problems now confronting us..However before I cleaned up and left I saw what the gear guard problem was.

The next Tuesday, the 9th, Alan and myself again went to investigate the lost stud problem, The ash pan was dropped, which gave me easier access to the rear axle and housing, The bottom half of the bearing was removed and sure enough the thread was found to be stripped. On checking the stud, only the first two threads had any cast iron in them, and all the rest were clean and undamaged.

I can only conclude that the stud was only held in by these two threads, and was about to fail in any case!!

So with that knowledge we decided to take advice on the next way forward.

Alan had to leave so I decided to start to ‘winterise’ and drained the boiler and the water tank and removed the injector cones, for safekeeping.

After thinking about how to make the repair to the rear bearing housing, I remembered from many years back, the use of ‘Helicoils’and wondered if that could be our solution.

I spoke to my engineer Rob and he said yes, we use them all the time for aircraft repair and maintenance, if you have reasonable access it can be done ‘in situ’.

Also on the Internet I found specifications of the sizes that I would need.

I would have to buy a ‘kit’, am still awaiting information, for that size. That was soon sorted.

Just as well that it was decided to go into the barn, as the weather has now really gone downhill, with temperatures down and below freezing.

The engine is winterised, with all pipework removed and drained of water and the engine is covered.

It was also decided to check on the other stud of the bottom bearing, and it was found to be in a similar state of ‘failure’! It was removed, and it was decided to have two new studs made, as they were of inferior material, anyway!! In process…

Also on inspection the actual bottom housing, which is only a retainer and not a bearing was found to be cracked! so it was taken to my local forge man and repaired..

I will be still working on 2135 over the winter, but at present, with temperatures below zero things will have to wait. 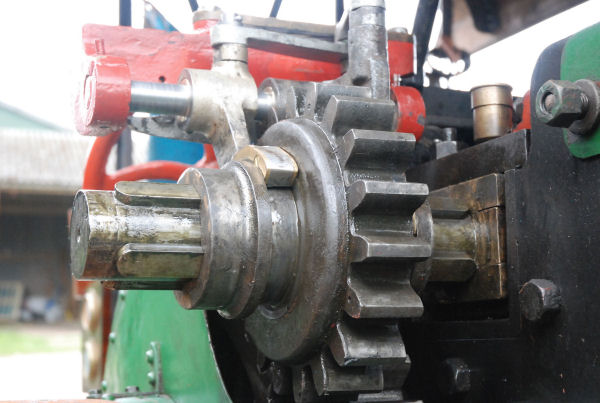 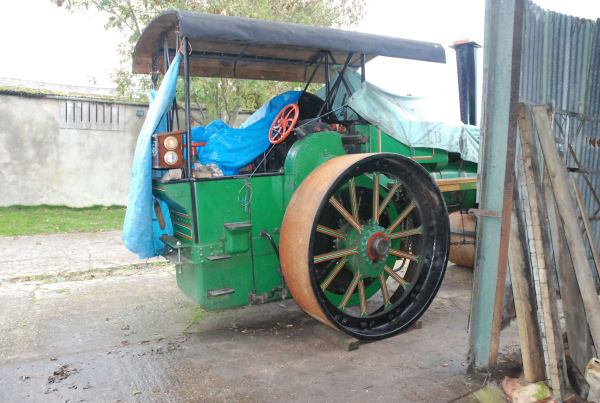 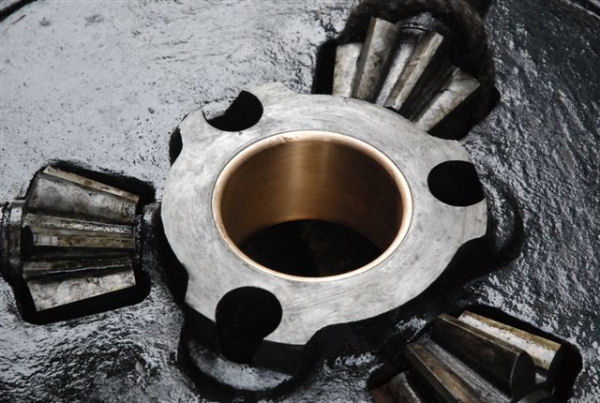 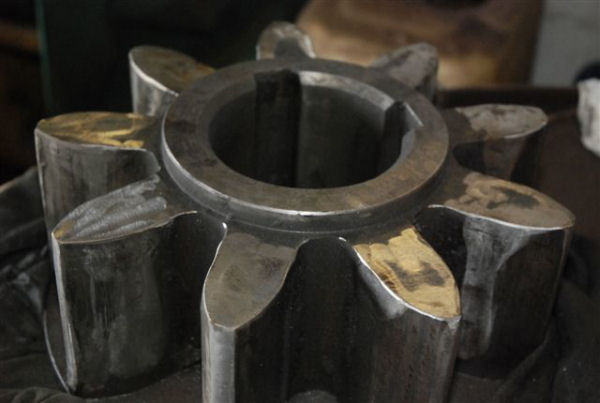 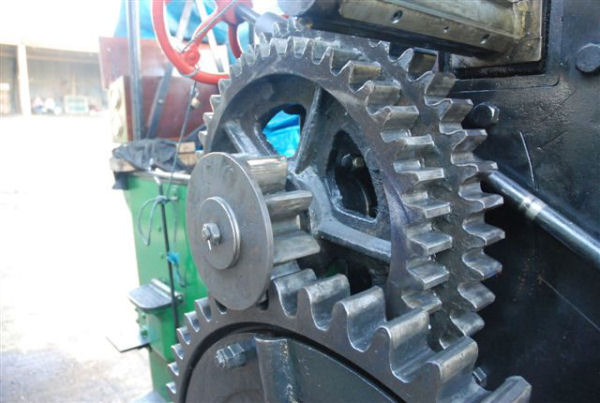 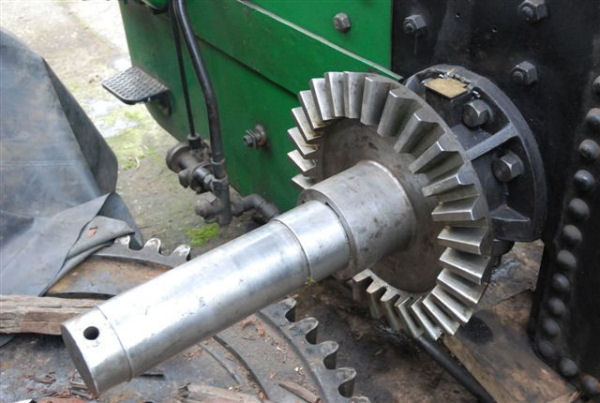 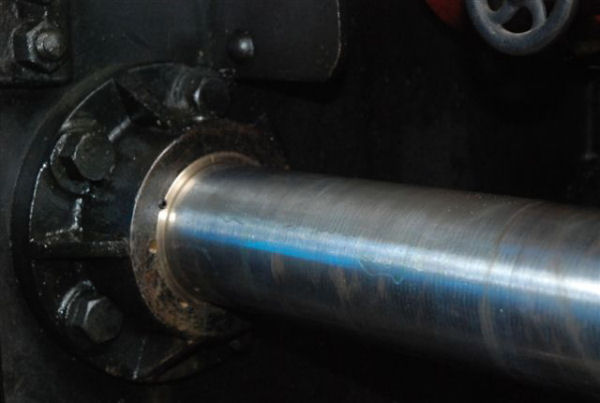