In January 2001, the SWAT team of the Cape Vintage Engine & Machinery Society visited Kersefontein, near Hopefield, to meet owner Julian Melck. We were following up leads on old engines, and we were not disappointed. On the farm were two Fairbanks Morse YH engines. One, a 14HP model is still standing on a concrete block where it used to run a centrifugal pump, drawing water out of the Berg River.

This engine is badly rusted from standing out in the weather and has parts missing from it. It would take an enormous amount of work to restore. However, there was another, of 10HP, stored in a shed, lying in pieces, along with the generator which it used to drive. Julian persuaded me to restore this for him. This included making new main bearings and a combustion chamber. These jobs were done over the following two years or so, and then an attempt was made to start it. The bearings were still too stiff to allow the operator to swing the flywheel rim against compression, which, like with a Lanz tractor, is the normal way to start it. It needed to be 'run-in' by another engine or tractor, using a belt.

The opportunity arose recently at our local Engine Show at Peregrine Farmstall, on the N2 in the Elgin Valley. With the help of Hermann Geldenhuys who has a similar engine, we belted up the engine to my Ruston & Hornsby 2Y HR and ran it for a while, with Hermann doing adjustments on the fuel injection pump. At this stage we had the combustion chamber off.

Soon, the engine was turning over more smoothly, and we decided to fit the combustion chamber and start heating it with a blow lamp. Hermann held off the fuel, until he was satisfied that the chamber was hot enough, all the while with the decompressor valve open. He then allowed the fuel pump plunger to come into contact with the push rod, and soon we were rewarded with a chuff, and before long, the engine was running!

We didn't have the water jacket connected to a tank, and the recirculating fuel system wasn't complete, so we just added fuel and water to the engine as needed. We ran the engine for about an hour, and tried to phone Julian, to tell him that the engine was running again for the first time in about 40 years! We ran the engine again later on Saturday for another hour, and then worked out what we needed to connect to a water tank, and to make the recirculating fuel system work.

Early on Sunday morning, these connections were made and we fetched and connected up the exhaust silencer. We started up with the belt from the other engine again and ran the engine for a couple of hours until we had a blockage in the injector. When this was cleared, we decided to try and start by hand. This engine has 'Electric' flywheels, smaller in diameter, but much heavier than the standard. This makes it more difficult to bounce the piston off compression in the wrong direction to start up. However, in the morning, I had noticed that although the belt had slipped off, we were still able to start the engine with the momentum of the flywheels running in the normal direction.

With four people turning the flywheels in the normal direction and another on the blow lamp, Hermann let the fuel pump go, and with a few light touches on the priming handle (too much fuel floods and cools the hot spot) she was away!

We have discussed the future of the engine with Julian, and the plan is to put this engine in place of the other rusted and incomplete one, which has always been called 'The Cannon', so that it too can pump water out of the Berg River. A building will be constructed around it, there is a reservoir there, and a wind-pump to add to the water supply. 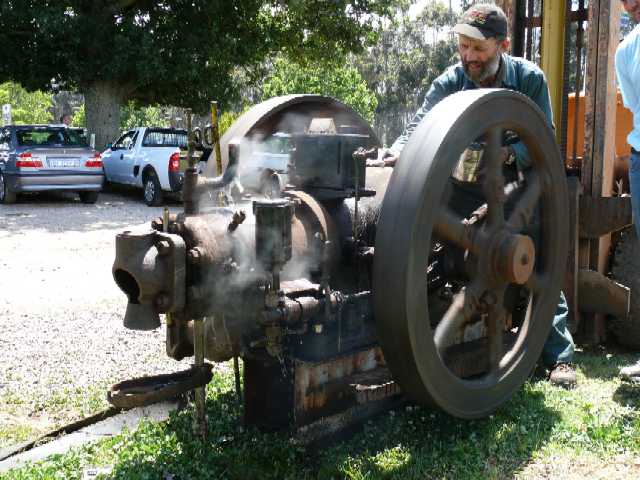 First start in 40 years is always an exciting moment for the restorer! 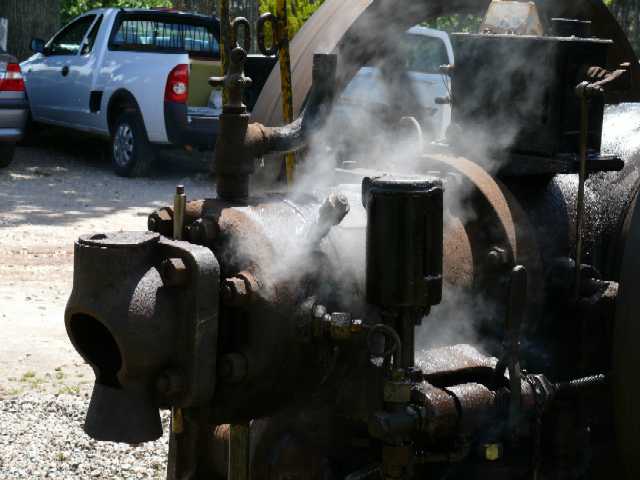 Detail of the cylinder head end, with the fuel reservoir, decompressor valve and chimney for the hot bulb of the combustion chamber 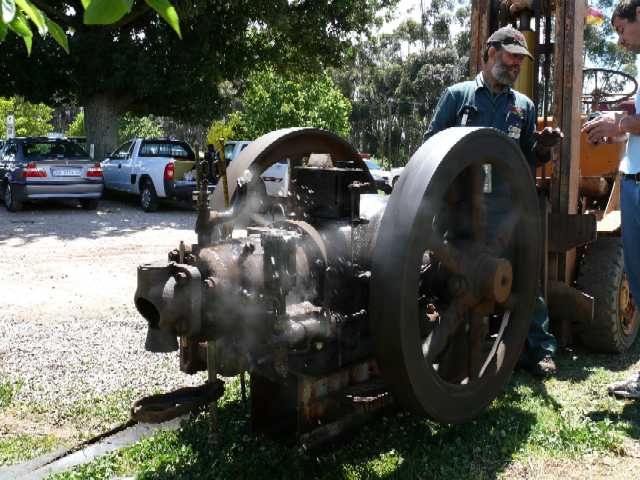 Yours Truly and Hermann, who helped get it going, he has a similar engine: 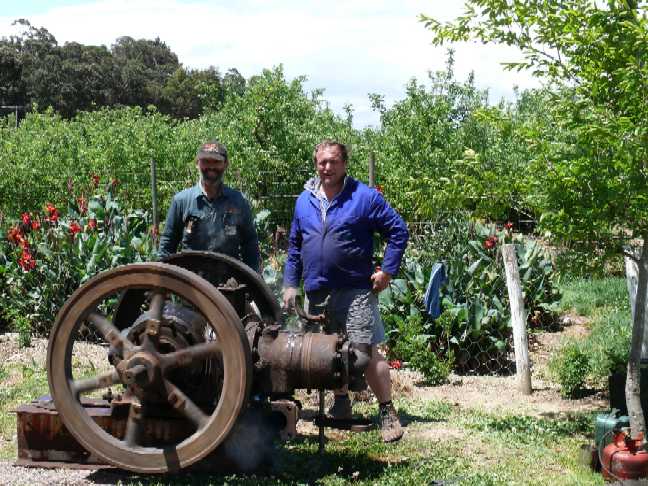 Look at the oil as it pours from the mouth of the oil can down into the cup on the fuel pump eccentric! 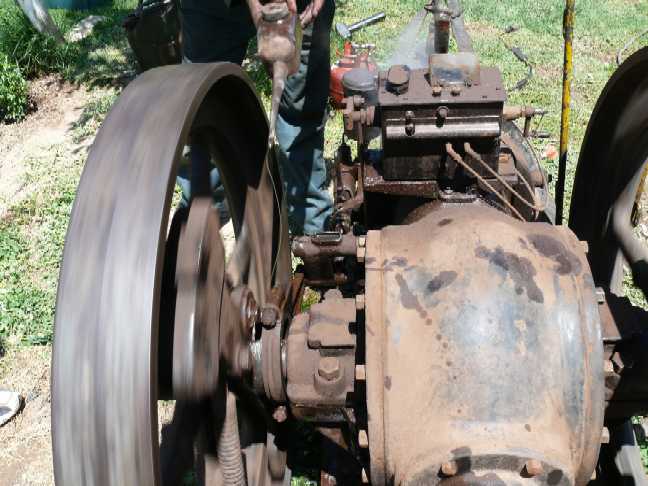 This was Sunday morning, with the water tank connected, silencer fitted and the fuel system sorted out: 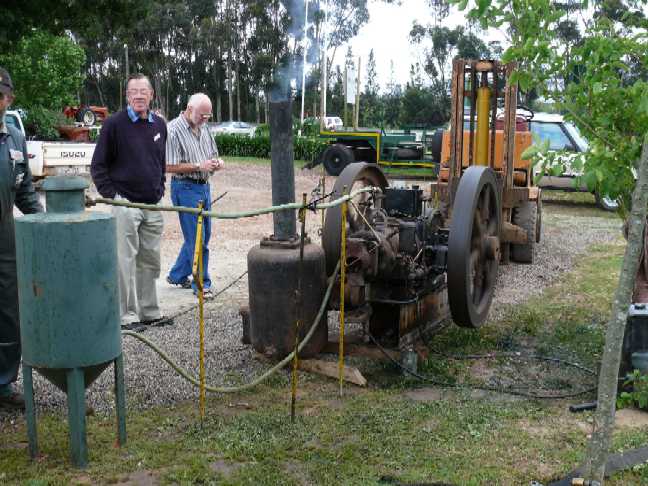