Members of the Villiersdorp branch of the West Cape Tractor & Engine society are busy with an interesting project, and they're working to a deadline! Just on 13 months ago we decided to make the recovery and restoration of a 1932 40 HP single cylinder horizontal Crossley diesel engine a team effort, and we have advertised that it will be ready and running on 21st June 2008! 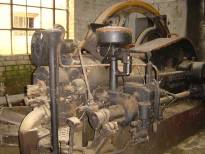 Our first deadline was to strip and remove it from its original place of work, Standard Roller Mills in Caledon, as the building had been sold and there was a danger that it would be cut up for scrap. Once the Villiersdorpers get stuck into something, there's no holding them back! Large teams of helpers turned up to push and lift! and in the space of two Saturdays, there was nothing left in the engine room! 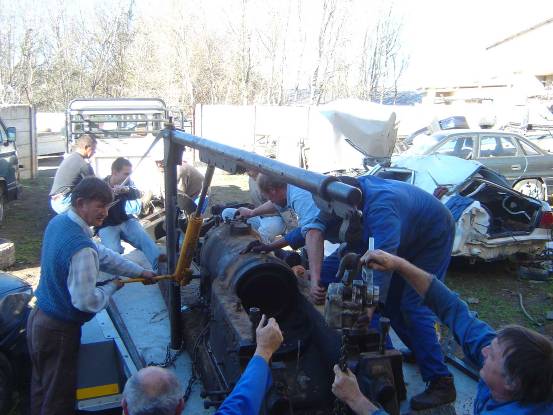 And in the space of two Saturdays, there was nothing left in the engine room! 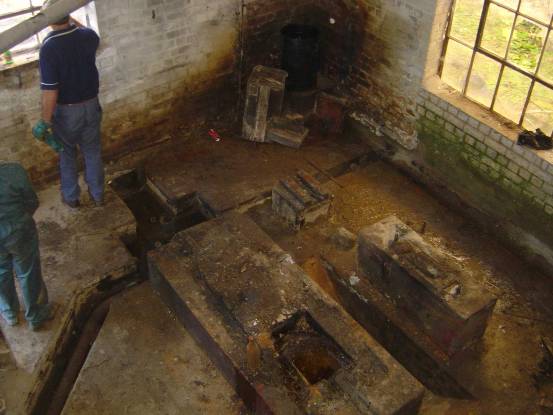 A while later a team assembled and with donated steel, we made a rigid steel framework: 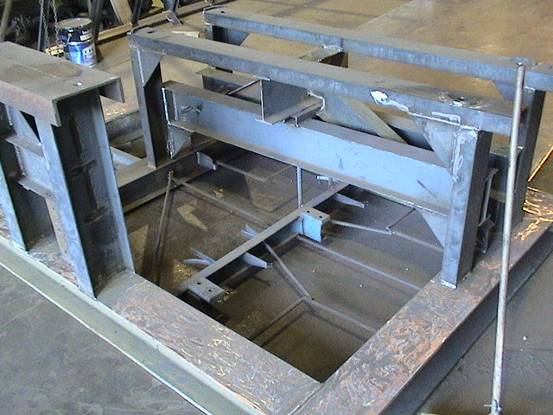 Most of our members are fruit farmers, so the project was put on hold for the season. As soon as the last apple was off the trees, we got stuck in and did the last welds and strengthening on the framework and started cleaning, painting and repairing the parts. The next weekend, we put the block onto the frame and then refitted the flywheel to the crank, and put the whole lot together: 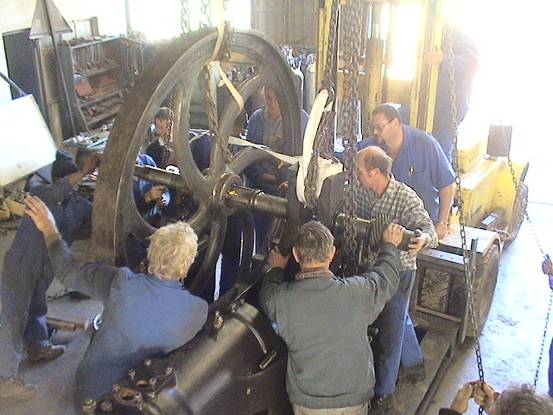 Then we loaded it and took it to its new home, the Villiersdorp Tractor & Engine museum: 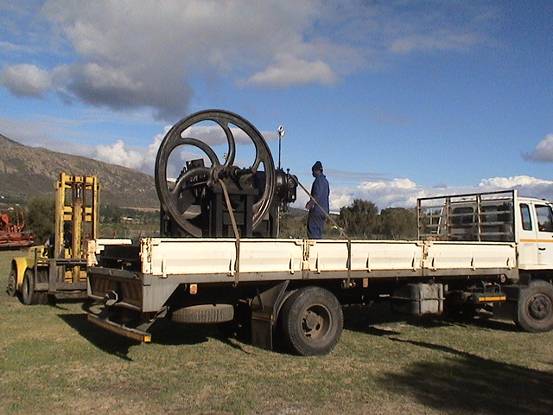 Once again a large team assembled to move it into position: 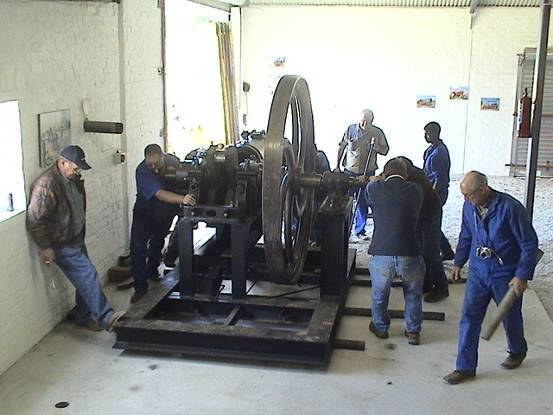 Once in position with a plastic sheet under it, we arranged for the base to be filled with concrete. This was done early in the week and by the next Saturday we could start assembling the engine. 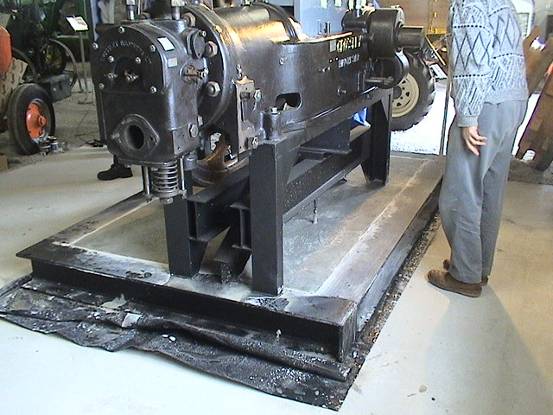 The concrete adds another ton +, to say nothing about rigidity. Then having cleaned and painted the side shaft and bits at the workshop first, it was sideshaft assembly on: 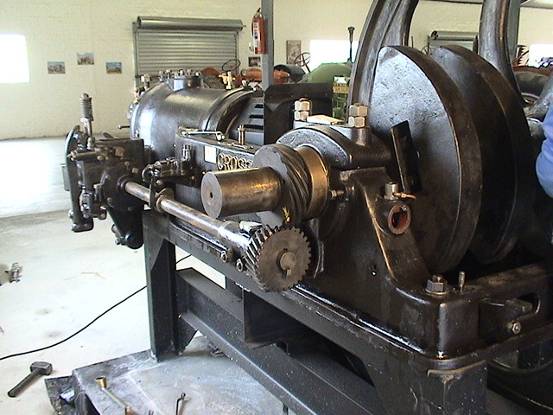 With attention to the timing marks. From the cam end: 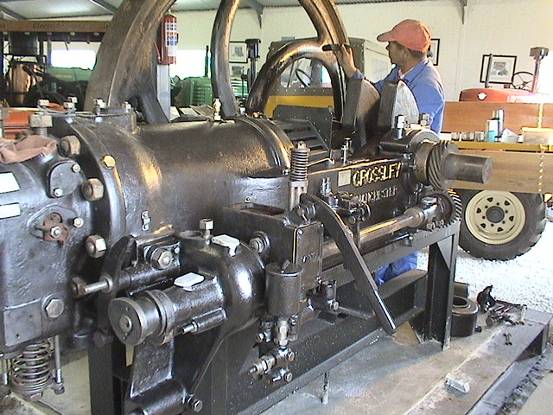 That's the basics, wait till you see what it looks like assembled! But Willem is there painting the flywheel, Josmi was too (taking care not to paint over the shipping details on one of the spokes!): 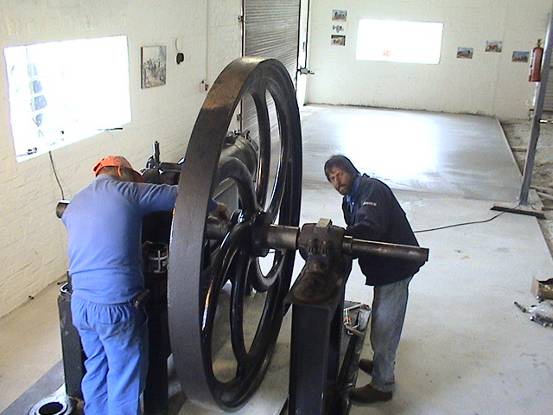 In the background, the new slab which was done at the same time, so we can get in and out with the forklift. We'll be collecting money for that on the 21st, (we have a plan to auction off a Fergy).... 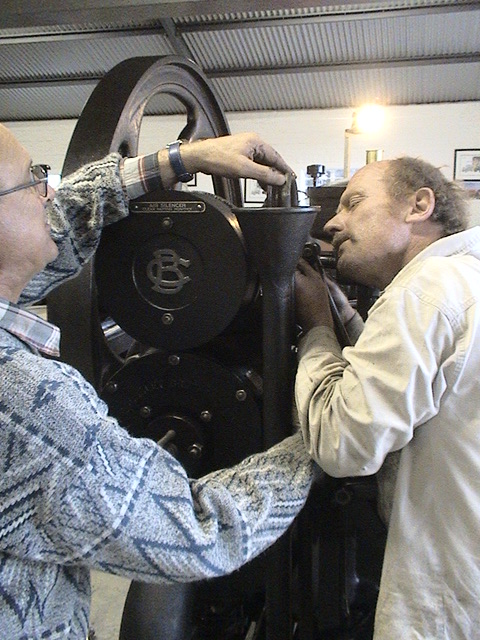 Nick and Eniel feeding pipes through, the right way past various obstacles, until the sideshaft area looked like this: 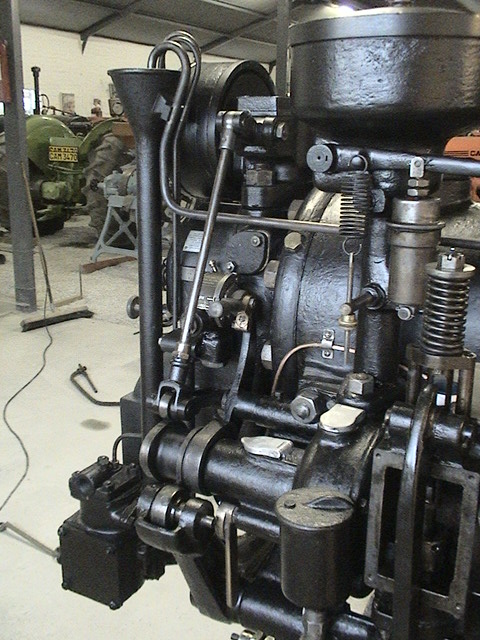 Even then there were some pipes to thread through, cleaning, polishing and flushing them: 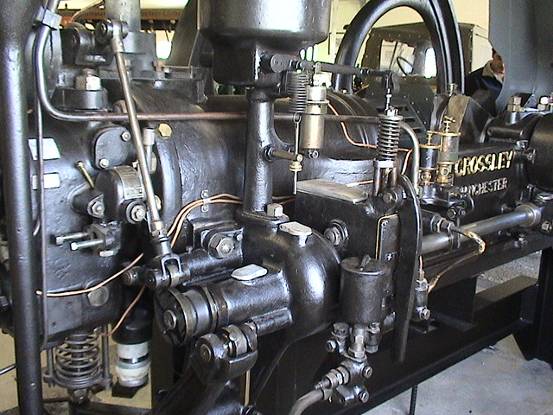 At the end, we decided to check if we had compression. A bad blow through the inlet valve, which for some reason we hadn't checked, so that came out again. It has just struck me that it might have been between the assembly and the head, so I'll check the seating of the valve in the cage first with a leakage test, but we took that off: 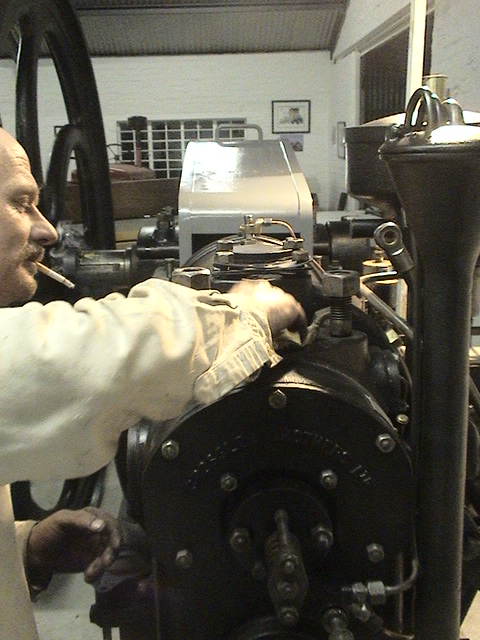 Looking towards the rear of the engine, the cover is on properly, it hinges back nicely against the rests, the shims are in on the big end, and there was a multitude of work involved with the detailed parts of the sideshaft assembly!

Again a nice, willing team, not as big as last week, but just right! Mrs Nick again brought a huge pile of sandwiches and coffee at lunch time to keep us going. I arrived late at 9am, but we went straight through until 7.30, hardly stopping. It was amusing to get a call from Graham Bowles from Baynesfield Museum in Natal during the morning, comparing notes.... they were busy at the same time up there with their Crossley HD9!

There is still a lot to do, but I think we're on track for the Big Day on the 21st!