Pieter Fourie, organiser of this event, summed the history of Engine Collecting in Piketberg in a short speech he gave to open the proceedings.

About 10 years ago, he attended an Annual Show of the Tractor and (then fledgling) Engine Club at the Brandvlei Prison Farm near Worcester. There, he met Philip Gray-Taylor and me, and expressed an interest in buying a collectable engine. In the end he was given an engine from John McGregor, a Wolseley. About then he moved from Greyton to Koringberg near Piketberg and started to instil an interest in Engine Collecting among the Tractor Enthusiasts. It has been an uphill battle, but about two years ago, he invited Philip and me up to give them some encouragement, with a technical talk, followed by Questions and Answers. Several engines were brought out of sheds for the occasion, but all along Pieter had the idea of a dedicated Engine Day. 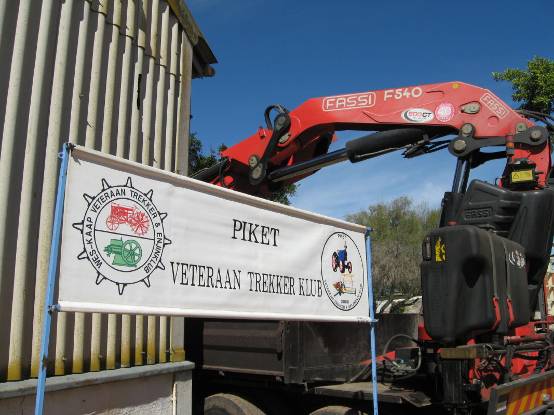 Pieter can be congratulated for bringing 56 engines together in one place, no small achievement for a country town! Philip and I were asked to judge the engines; a task we intensely dislike, so Philip suggested giving a prize for the Engine We'd Each Like to Take Home! During the day, we thought up some more prize categories, like Best Restored Engines in One Display; Most Enthusiastic Display; Most Impressive Display; Most Interesting Unrestored Display; Best Pair of Interesting Engines; and Most Technically Interesting Engine. In store for next year's show, is a prize for the Best Engine which was not a Runner Last Year; that should encourage them to work on those engines which are untouched since our last visit!

Offloading was slick; we'd hardly stopped before the engines we'd brought were whisked off and put down gently with a Michigan front loader! 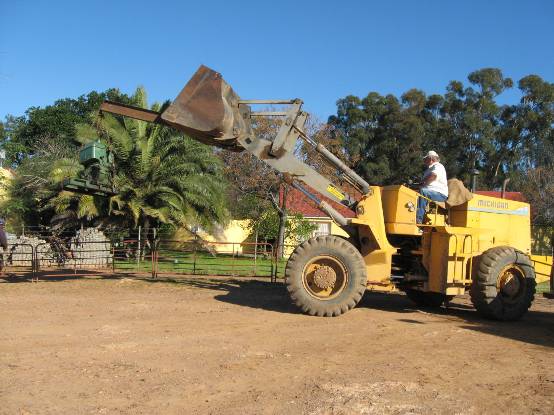 But first, the Show had to be started.... with a Bang! Ryk de Wit, member of both the West Cape Tractor & Engine Club and the Cannon Association of South Africa obliged, our host Gerick Vercuiel has the taper: 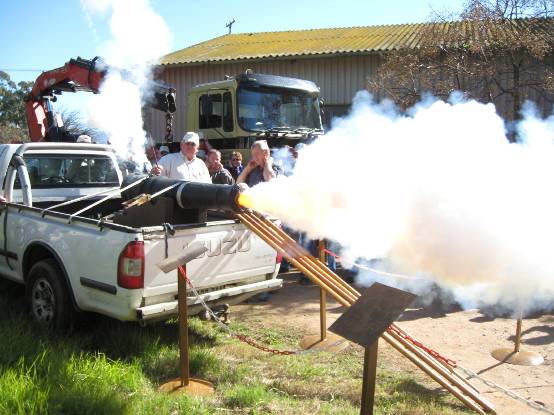 One is advised not to be rude to him in traffic.

Leaving the 'Take Home Engines' to last, Gordon Riley walked away with the Best Restored Engines in One Display: 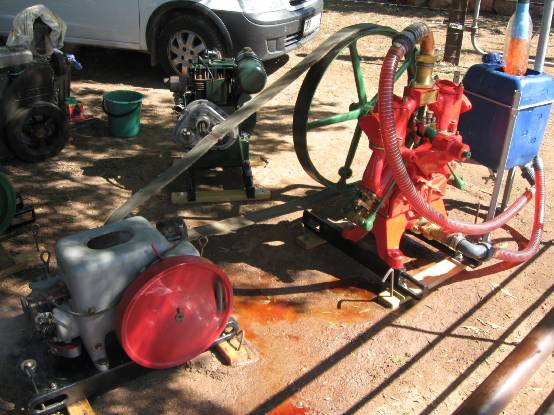 International LA, driving a Marmonnier Wine Pump. Behind is an immaculate Air-Cooled Wolseley. 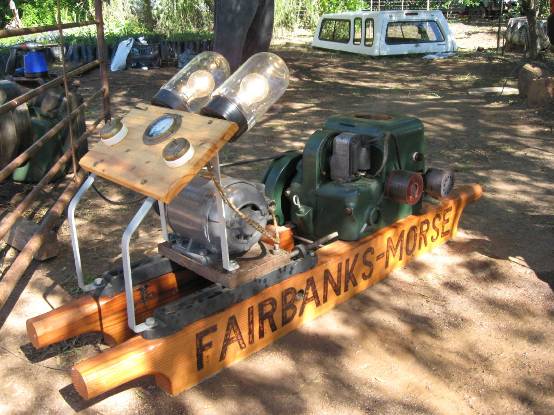 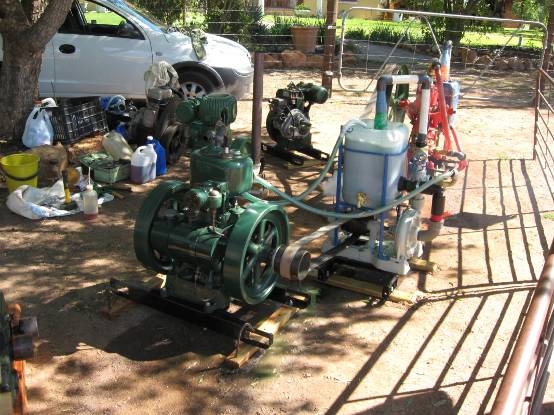 And Lister A driving a Fairbanks Morse Centrifugal Pump. Any objections so far?

Most Enthusiastic Display. Bertie Smit with his Caterpillar D311 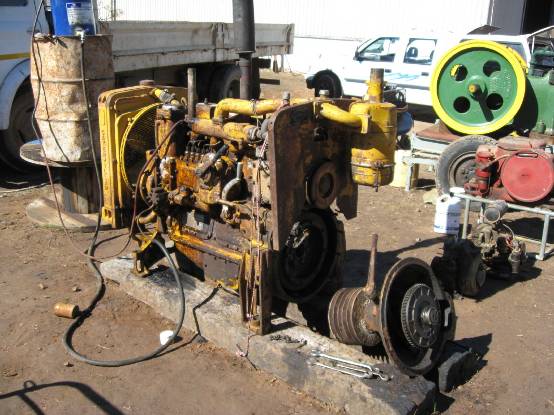 He's partly visible below, putting load onto the pulley with a tar pole! 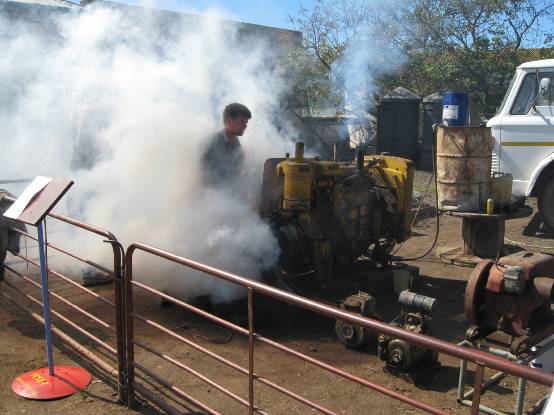 Most Impressive Display had to go to the Machine Moving & Engineering lads with their pair of Blackstone P engines, a 22 and a 50 HP: 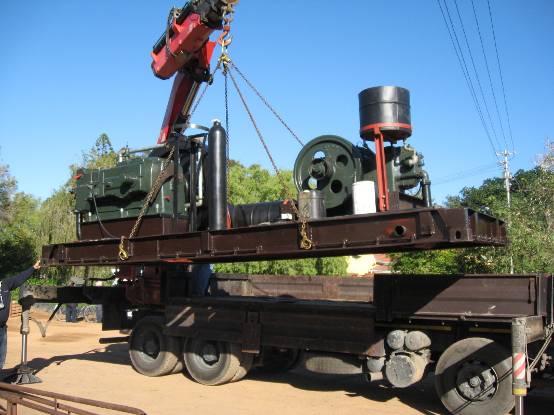 Yes, Leon was watching the overhead power lines very carefully! Unfortunately there was a technical hitch and after running faultlessly at the Annual Show a few weeks before, the Big One wouldn't run.

Most Interesting Unrestored Display was easy to decide on, Johnny van Wyk from Citrusdal brought a collection of mostly John Deere engines; two Es and the whole range of LU 2-cylinder (of course!) engines, the LUC (combine), LUW (Wire-tie) and LUS (Stationary), all in various stages of disrepair, the LUC is almost a runner. 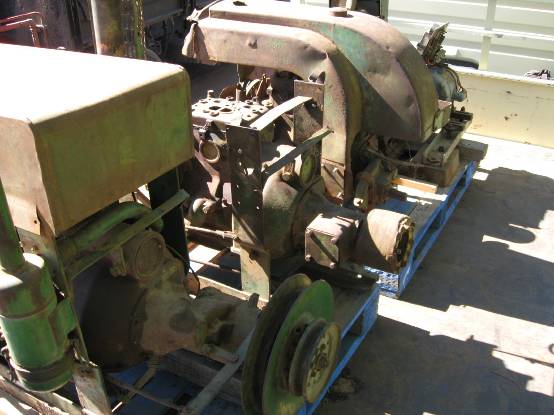 This shows the take-off ends of the engines, there's a double vee-pulley, a paper-disc flat-belt pulley and a 6-spline PTO shaft.

One of the JD Es was very badly rusty as though it had been under water for a long time. 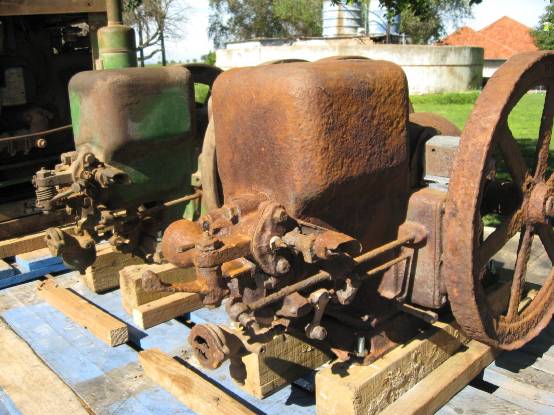 Best Pair of Interesting Engines went to the pair of Bamford 'suitcase' engines: 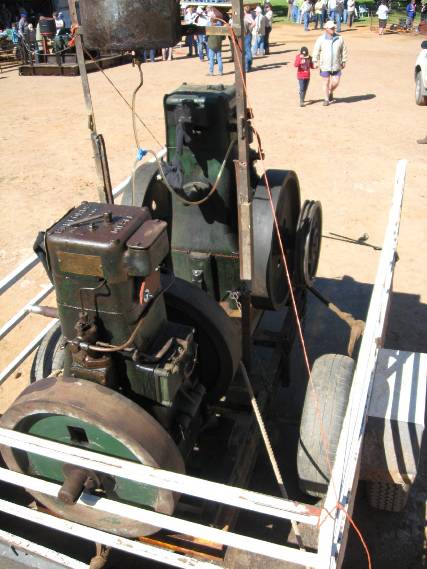 These aren't popular in the Cape; the only other I have seen was owned by Yuri in Graafwater, not far away. Perhaps there was a good distributor in these parts. 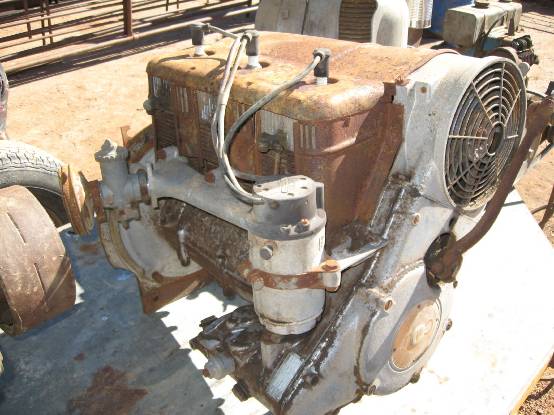 Candidates for Best Engine which was not a Runner Last Year; for next year, could be, at the easy end of the scale, a Slavia Diesel simply needing an injector pipe, and at the other end, a Sachs air-cooled diesel of Pieter Fourie missing a lot of parts, including complete fuel injection pump. During the Show, he was offered another similar engine by a visitor, so maybe there's a chance! This engine was interesting in that elsewhere on the Show was the water-cooled version of the same engine, looking as if it was removed from a walk-behind rotavator. 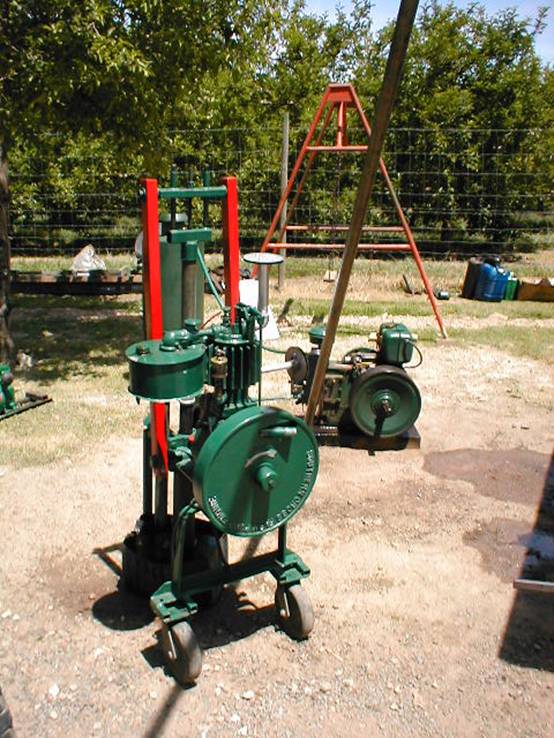 We left with the feeling that the Engine Collectors of the Piket Veteraan Trekkerklub are now firmly established and we hope that their Antique Engine Show will become a regular Annual Event! There was no charge at the gate, but contact details were taken of every exhibitor and visitor.