It's been a while since I sent in a Mill report. The reason is that we've been busy at our Museum in Villiersdorp setting up, assembling and getting going the big Crossley engine we rescued just 13 months ago from Standard Roller Mills in Caledon: 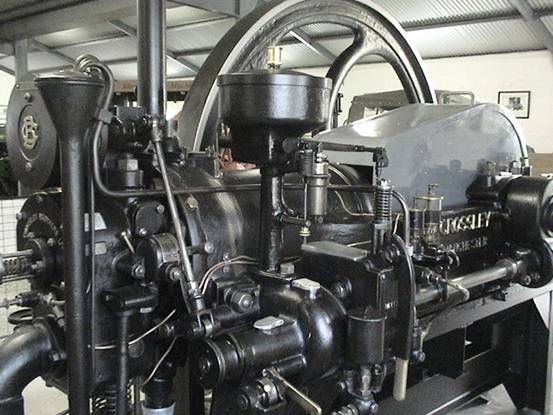 Last Saturday was the Big Start up, and it ran beautifully for most of the day. 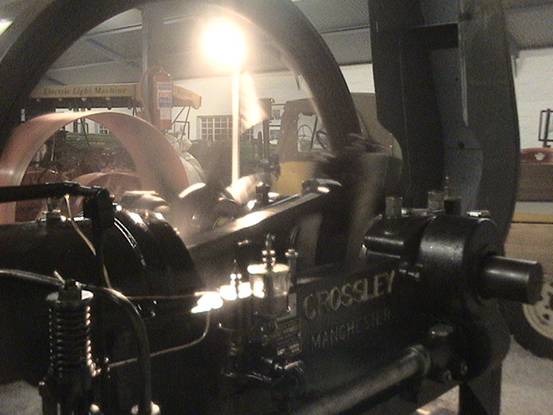 To give an idea of the size, that flywheel is 2 metres (6' 6") diameter! We just had to fit this project in, between the end of our fruit season and the beginning of the winter holidays!

So I had to get back into the swing of the project. I had four things to do and the weather couldn't decide whether it was going to rain or not. Every time I climbed the scaffolding to carry on with the launder, it rained. Back on firm ground, the sun would come out!

I decided to concentrate on the base of the main elevator, that is, to fit it to the bottom of the square trunking and to feed the belt through. But I also wanted to mill a batch of grain, and I was expecting visitors. Will van der Schaaf who is well known in mill restoration circles, probably the only professional water-millwright in the country, arrived mid-morning with his brother in law Eric and we had a lot of information to exchange.

Will was hoping that we could work together on mills commercially. I had to disappoint him by saying that I already have too much on my plate with an agricultural machinery repair business and an apple farm, and that playing at this MIll is just for fun. I think I also persuaded him that there just isn't enough Mill work in this country. Or rather we agreed there is, but there isn't the will or dedication to allocate funds away from core activities on the farms to have mills restored. Even holiday accommodation takes much more priority , giving more tangible cash returns.

He showed me photographs of mill restorations he had done, including completely re-making water wheels, especially the complicated Compass Arm wheels where the spokes pass through the axle tree. It was interesting to see the lengths he has gone to, to prevent rotting of the wood. I found the photos and drawings very informative, the standard of his craftsmanship is outstanding. I noticed interesting points like leaving no gap whatsoever between the planks, where we deliberately did, to allow for swelling. However, his was a wooden-rimmed wheel which will swell also, where 'ours' is cast iron. That might have an influence.

While Will and Eric were still there, John Raimondo arrived, having been referred by Joanna Marx. He has an interest in a mill in Van Wyksdorp, North of Riversdale, South-East of Ladismith. We were able to go through the whole milling process together, from conditioning the grain to sifting, weighing and bagging. John is wondering whether the mill in Van Wyksdorp might be useful as a comunity upliftment programme for the locals there. From his descriptions, the mostly metal water wheel is badly rusted, but inside the mill is a Portable Mill, which might not mean too much internal work. At least he says the hub is intact.

Back to the elevator base.... I fed the belt down from the top, down the back (complete) trunking until it came out at the bottom. I had installed a strip of lacing (katnaels) on one end. I had to take off the two sides of the elevator base to get it in underneath, then I used blocks and a wedge to push it upwards. At the same time I had to feed the end of the belt through from the back, under the roller and out through the front and up into the front trunking, which, luckily, has a piece missing. It's very cramped working in the well in the floor: 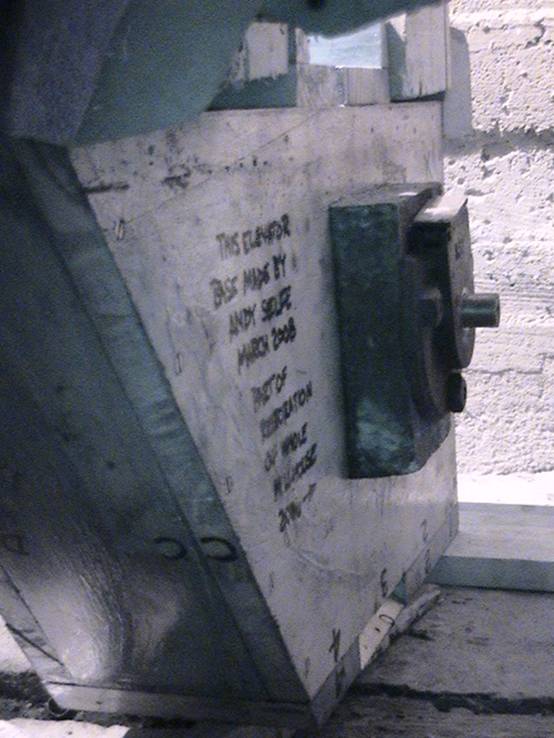 I then had to modify the sides, trimming them to fit the base of the hopper, and then put them back matching the screw holes up exacltly. I wrote on the side for the benefit of historians in future....

From the front, after it was in position and the sides on, I was very pleased with how the base of the hopper matches up with the new elevator base: 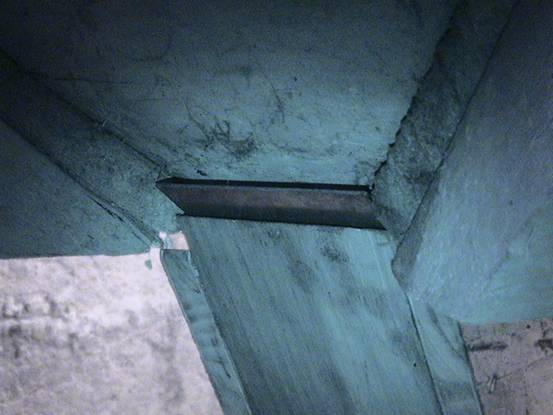 That is the lip of the steel lining of the new base, bent over before cutting the excess off, just protruding under the front of the hopper above. There will be a little patching with metal sheeting to match other similar work on the corners of the hopper, on the inside, just to seal any cracks off, to prevent loss of grain.

I could then cut the belt off to length and install the second set of lacing. I had intended to have a gap between the ends and to tension the two together with wire. The other elevator has a pair of leather belts and buckles at the join which can be tightened, just like a trouser-belt. As it happened, I was able to stretch the belt and fit a rod through both: 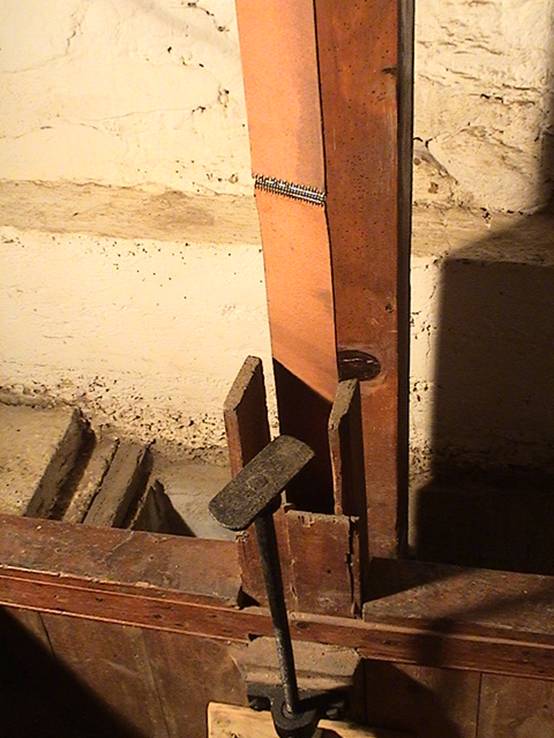 This shows how handy the missing piece of trunking is. Otherwise the join would have to be made at the top, inside the dormer in the roof. I had not yet wrapped up the engine, so I couldn't resist the temptation to start up again and watch the belt going around! It takes about 3 to 4 seconds to do the 11.5 metres. I can now salvage and fit the buckets from the piece of belting I discovered in the rear trunking when I stripped the old rotten base off. It was great just standing upstairs watching all the belts doing their thing!