Built in Berlin, number 4102 is only one of three narrow gauge examples owned by local companies which exist from this prolific German manufacturer. Delivered in 1910 it is of the 50hp type. Originally used at West Rand Consolidated Mines it was sold to Vogelspruit Gold Mining Areas Ltd in 1936 and retired when the mine regauged to 3'6". In 1952 it appears to have been rebuilt for use on the children's railway at the mine. On the mine closure in 1968 it was transferred to West Driefontein before being donated to the Midmar 2ft project in 1990. Some restoration work was done here but was unfinished when the Midmar railway was closed in 1998. Together with a number of other items the O&K was put up for auction and sold to the 2ft Preservation Trust and moved to Port Elizabeth. The new owners were keen for the loco to be restored and it was transferred on loan to Sandstone in 2002.

The restoration began early in 2003 and was subcontracted to Steven's Mechanical in Howick. The restoration was extensive with most of the tanks being replaced, a new rear buffer beam was fabricated together with piston and valve rods. New axle bearings were machined and many brass fittings remanufactured or replaced. The loco was finished in black with yellow lining and returned to Sandstone in May 2003. The loco is unusual in the Sandstone collection in that it carries its water in a tank under the boiler, hence it's description as a 0-4-0WT for "well" tank. As the water capacity is limited the loco only has a short range but is quite capable of hauling two light coaches on the Hoekfontein to Grootdraai section. 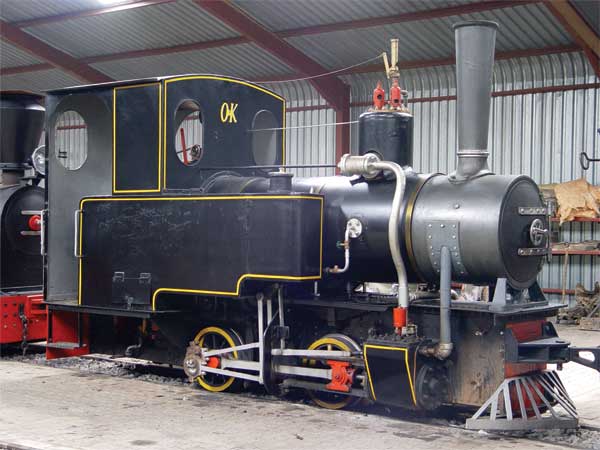