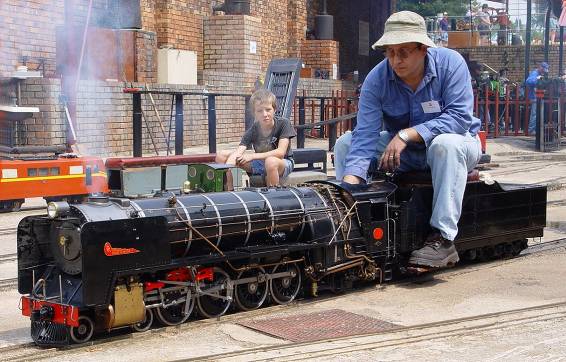 I started building locos with a Simplex that took me 5 years. After the Simplex I completed a part built 5" King Class loco. I took a brake while overseas, and when returning in 1997 decided to built a 5" SAR loco. I actually started with a 19D Vanderbilt tender, finished the coal bunker, frames and buckeye bogies. I then decided upon seeing the real 15F visiting Middelburg as part of the Great Train Race between Witbank and Middelburg that I will rather build the 15F. I liked the larger firebox, and I had the opportunity to take lots of photos. I thought I could pair the 19D tender to the 15F, but realized it will not look right as the 19D tender is narrower than the 15F and was never paired in real life. I abandoned the 19D tender and started with the 15F with a 23 tender.

The building process took 7 years with about one year of other activities in between like home renovations and additions. In the beginning I actually started building the tender and a lot of individual parts. At that stage I bought the SAR drawings from the museum. I only had most of the general arrangement drawings. For the detail I took photos of real 15F's. The model is of the last order of 15F's, fitted with vacuum brakes to the loco. 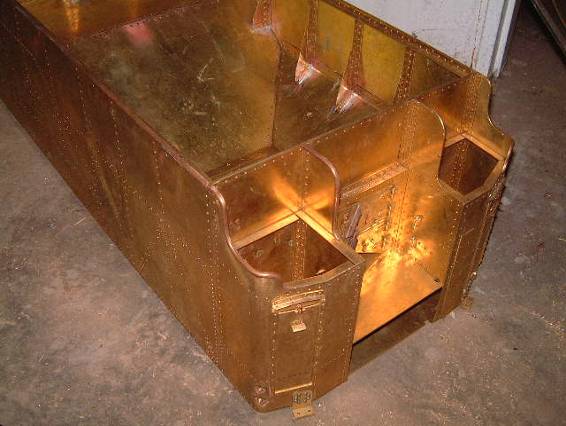 The tender is actually a class 23 tender, as a lot of 15F's were paired with 23 tenders after scrapping of the 23 class. The tender tank is made of brass with at least 2000 1.6mm rivets. It has space for the mechanical stoker, all detail of the toolboxes and coal doors. I got all the rivet detail from different tenders, as some of the surviving tenders had areas without rivets due to welded repairs. I visited Johannesburg Live Steam Club with the part build tender and had a very fruitful discussion with one of the members. He gave me quite a lot of the tank top detail photos. I could never take photos of the top as every time I had the opportunity to photograph a tender it was below overhead catenaries and I could not get to the top. The frame channels are made from square tubing sawn in half and machined to correct width. 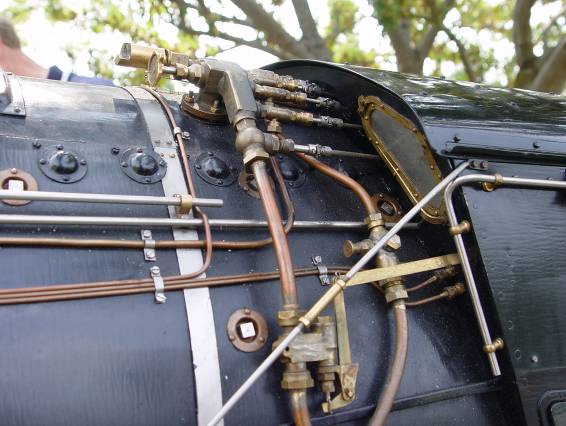 I also made most of the fittings rather from photos than drawings. Between the fittings I made a lot of the frame stretchers and platforms. As most of the parts are one off's, they were cut on the bandsaw, drilled and filed. All the castings were fabricated in this way. I also made a pattern with the help of a member of Centurion Society of Model Engineers for the driving wheels. He also helped me to get the wheels cast. The front bogie wheels are built up with individual parts brazed together. I also made items like the cowcatcher and couplers. I spend probably the first 3 years on this. 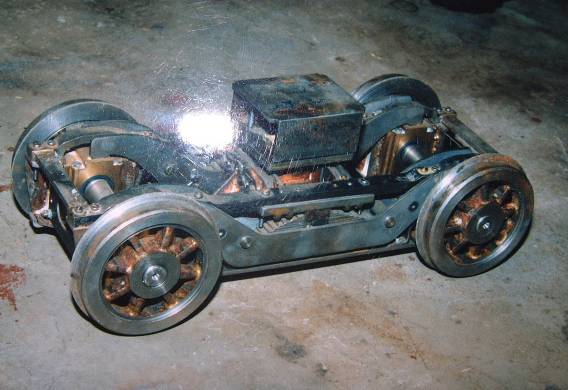 At that stage laser cutting was getting more available and I started to get a lot of spares cut. I got all the front bogie parts laser cut and the frames with water jet cutting out of 16mm steel. This speeded things up a bit. The frames were a big job with all the motion, compensated suspension and brakes. The platforms were made from scale checker plate etched from brass. 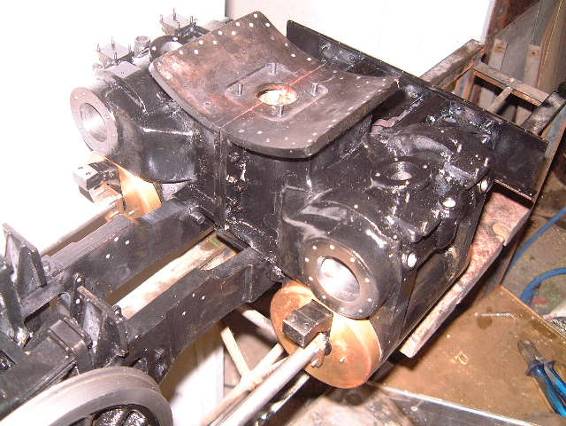 Cylinders was developed and laser cut. It is build up from seamless boiler tube and individual laser cut parts. Some joints were welded, and finally it was brazed to seal the remaining joints. Cast Iron sleeves were used for cylinder liners. 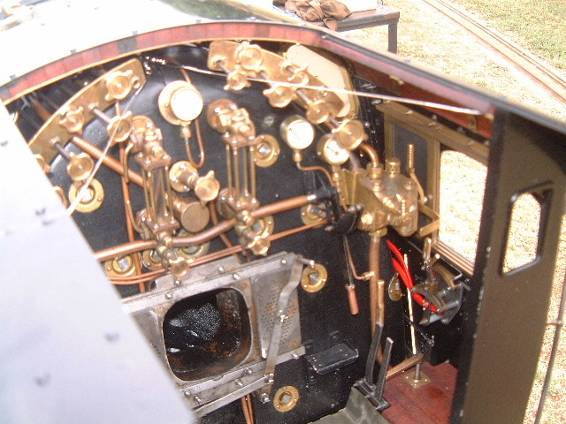 The boiler was one of the last things to build. It is built from 200mm seamless tube, 8mm plate and hydraulic tubing for the firetubes. To make handling of such a big loco easy, all parts were made, assembled and stripped. When the boiler was made it was matched to a bare frame. 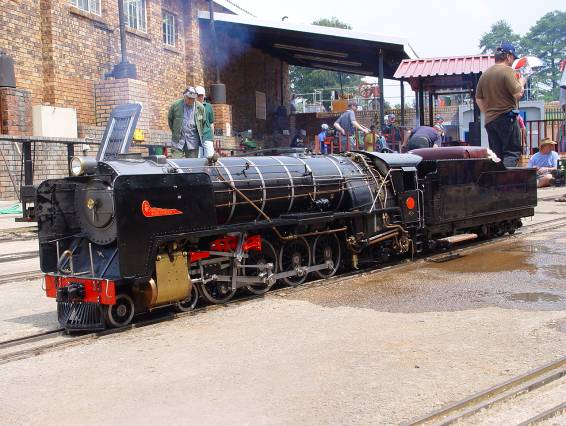 Assembly and painting took nearly a year. The only items outstanding during assembly were a few final pipes. Once the frames were assembled and all the brake hangers done, it was turned around for the last time. Since then the loco has been on its wheels. After adding the boiler it became too heavy and cumbersome to handle any other way. 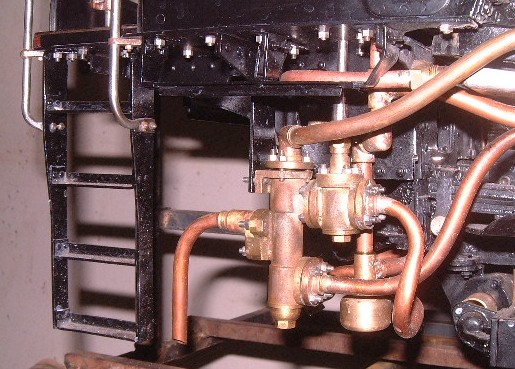 It was first fired up on the 9th of October 2003 to test the injectors and the blower. The loco has been in steam 37 times and a total of 169 hours till the end of 2009. It comes down to 4.5 hours per steaming on average. It is a very pleasant loco to drive and steam. As it doesn't work hard when pulling a few passenger trucks at the clubs, steam pressure hovering between 45 to 60 psi is adequate to supply ample power. The only real repairs needed so far were a new grate and repairing of the cowcatcher. The first grate had a hole burnt into it after the "stoker/driver" failed to clean the ash from the sides of the ashpan and it overheated. The cowcatcher was damaged during a derailment when driving over wrongly set points one afternoon after 5 hours of steaming. All the motion and axles are needle roller bearings on EN24 shafts, with limited greasing and oiling required. Injectors were tuned till they operate without problems with only the Sellers valves to used open the steam supply. It may appreciate a bit of attention to glands and some valve or cylinder bypass. 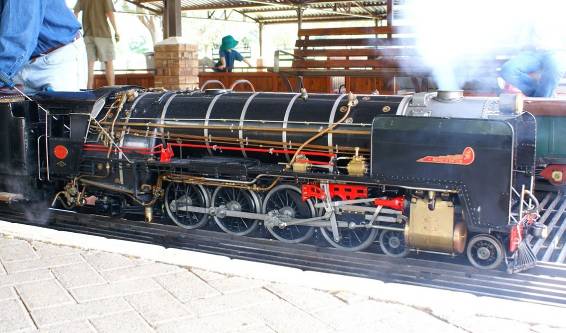 A SAR loco in 5" or 1/8th scale is a real workhorse and like the real thing, a pleasure to drive. I can recommend any serious builders to consider a large SAR loco. The time and money spend is definite worth the effort.

Some more pictures of Leon and his 15F: 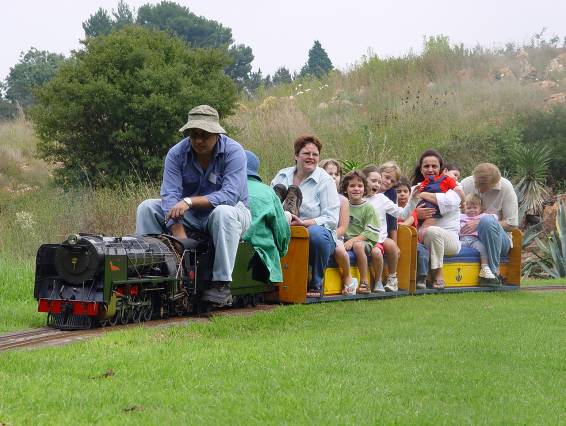 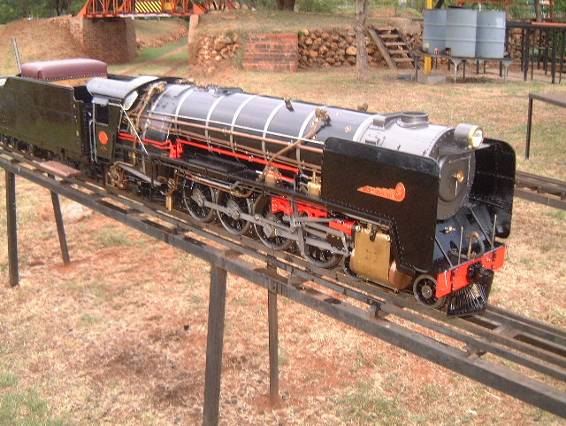 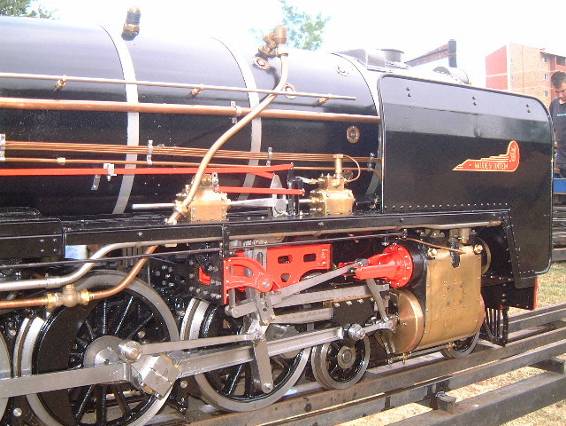 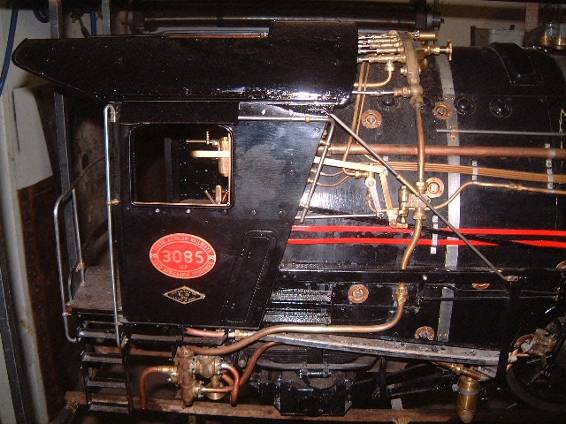 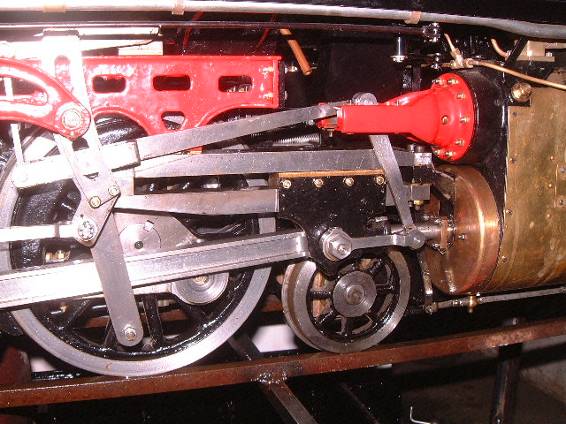 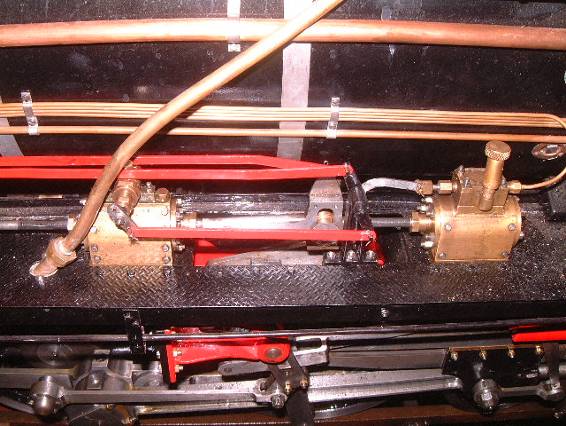 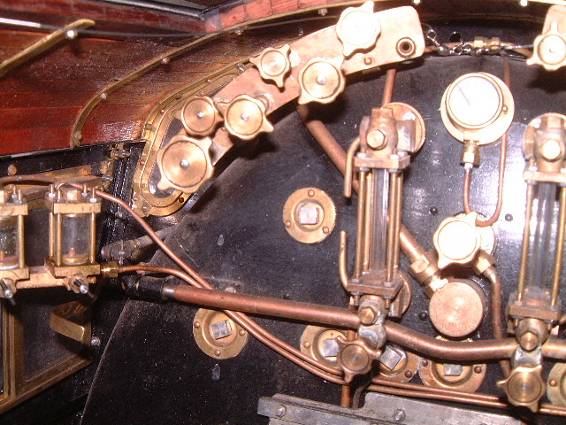 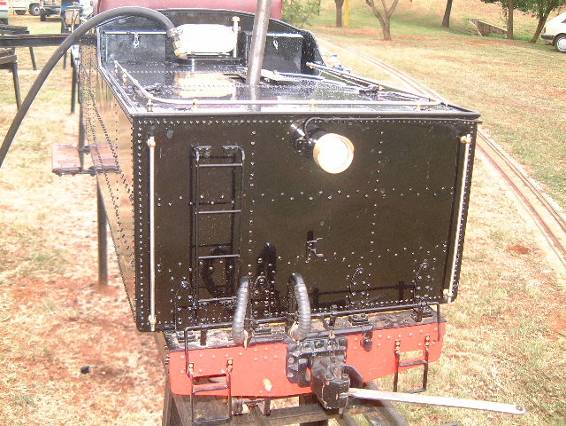 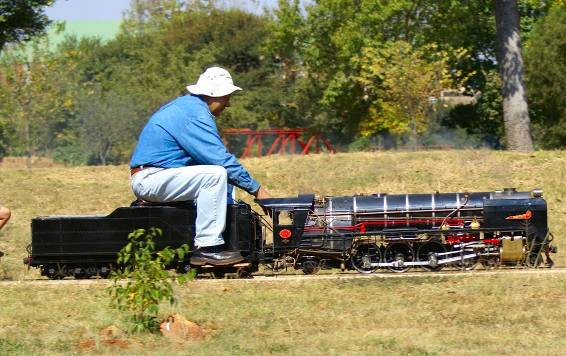 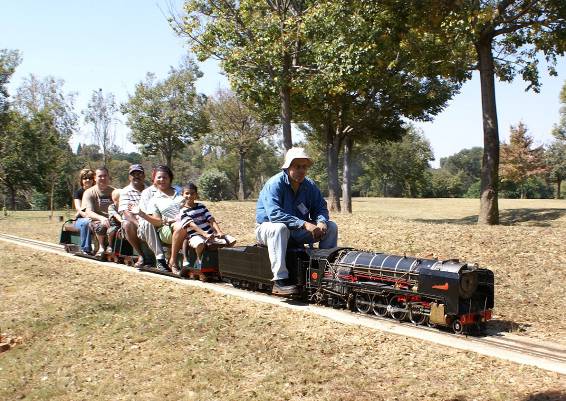 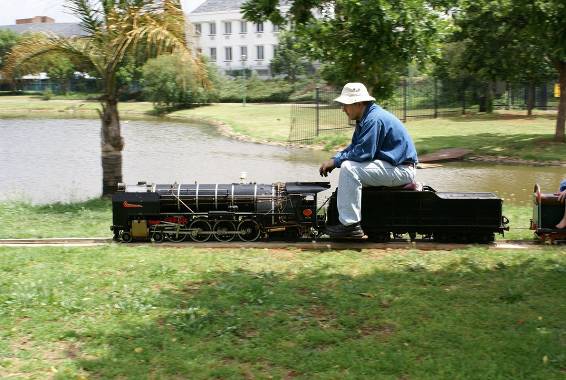 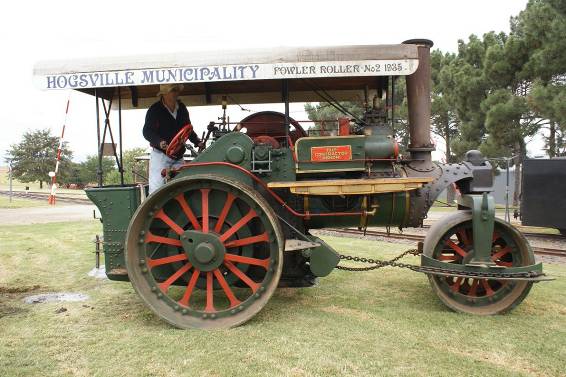 Leon on a visit to Sandstone