Rescued from the Companhia Do Assucar De Angola (CAA), Fazenda Tentativa near Caxito in Angola in 2003, O&K 11112 is now ready for its steam trials at Sandstone.

In South Africa most sugar estates had a rail system, generally of 600mm gauge, but Fazenda Tentativa uniquely operated on 500mm gauge and No. 11112 was one of four locomotives acquired from the location.

Originally delivered in September 1925 to Fazenda Tentativa, it is of the 30hp type and believed to be their No. 5. It was last reported in service in 1969. The area was the scene of much guerilla warfare and was riddled (and still is) with landmines. While being a curse on agricultural development in the area until finally cleared, the landmines protected No. 11112 and its sisters from vandalism.

Many O&K locomotives of the period had keyed axles so that a change of gauge was possible and this has been done with No. 11112 which is now 600mm. Having been left in the African bush for many years the loco’s condition was believed to deem it beyond repair. However, it was decided to attempt a restoration which commenced in 2010. The cab and tanks had to be remade and all the boiler mountings and fittings have been fabricated from scratch. The damaged frames were straightened and the cylinders rebored. The boiler was repaired to such an extent that it is effectively new and the locomotive reassembled.

It has been painted in a bright yellow colour which highlights the black boiler and frames, and, coincidentally, Stevenson’s “Rocket” locomotive of 1829 was also painted a bright yellow.

The locomotive has also been named “Ermyntrude” after a Queen of the Valkyries who was a particular lover of children. Being a small locomotive “Ermyntrude” will be used extensively on children’s trains at Sandstone and at the 2017 Stars of Sandstone event. 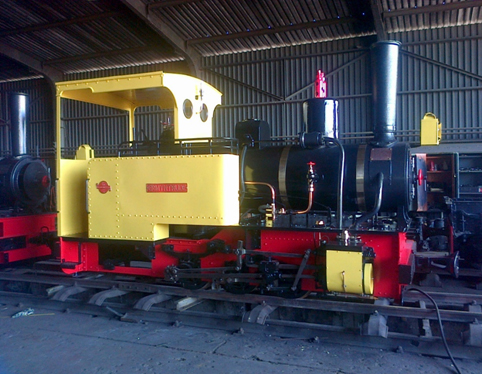 Following on from this news of O&K No. 11112 “Ermyntrude” from Bloemfontein, its sister locomotive, O&K No. 12140 of the same type, also from Angola, has been released from the paint shop in another bright colour for use on Sandstone’s children’s trains. The name of the locomotive will be announced shortly. 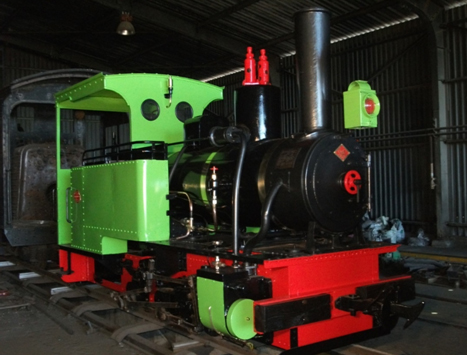 Sandstone is proud to have completed the restoration of two locomotives in the same week and to put the enormity of the task facing Lukas and his team, the archive picture below from Sandstone shows the condition of the locos as they arrived from Angola.