Over the years the Sandstone Heritage Trust has bid aggressively on scrap tenders involving 2-ft Narrow Gauge wagons. We now have well over 200 wagons on the farm which means we have to continuously build extra storage lines.

Because we are a Preservation centre we are very prudent about maintaining a strong inventory of key items but in order to fund our on-going operations we will, under certain circumstances, export Narrow Gauge wagons.

Our criteria would be that we would want to keep at least 20 of each model before even considering that. The pictures below show B-wagons being restored and prepared for export. 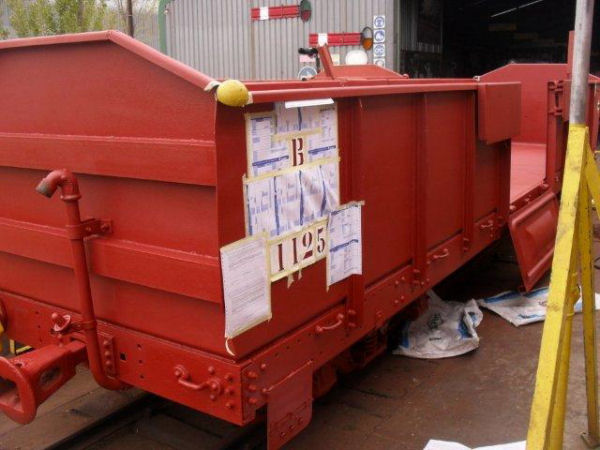 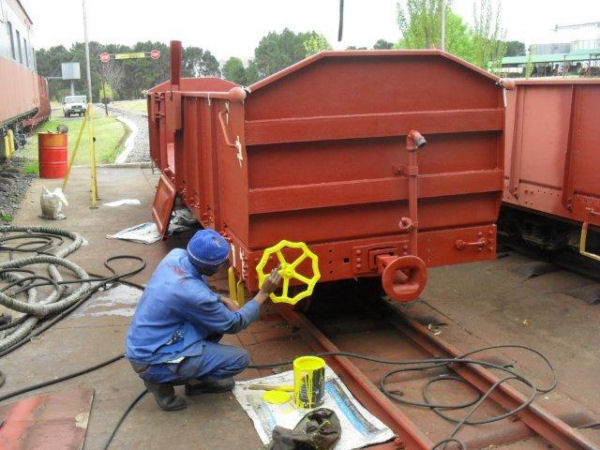 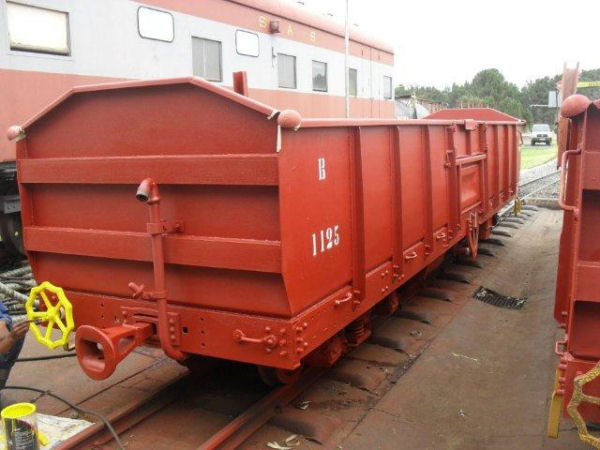 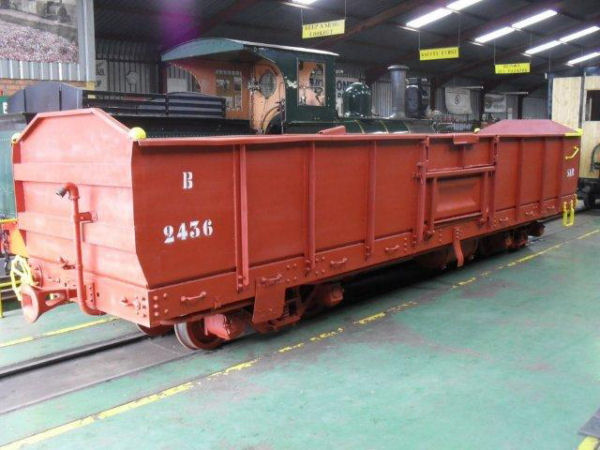 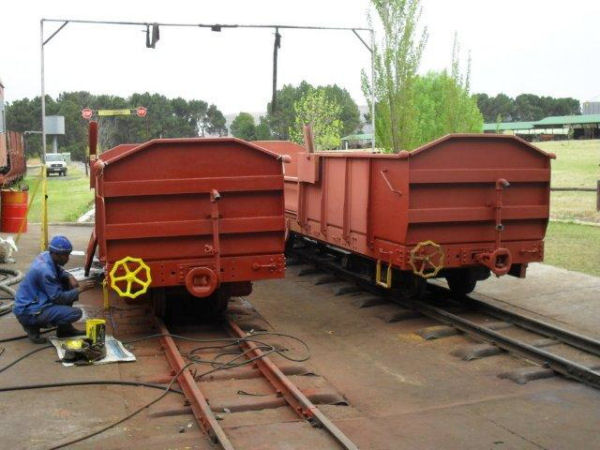 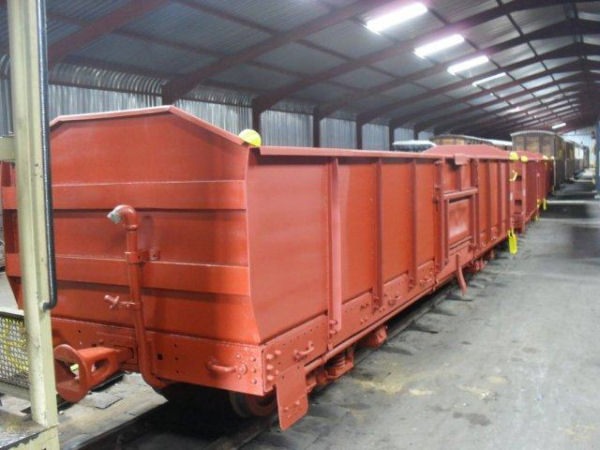 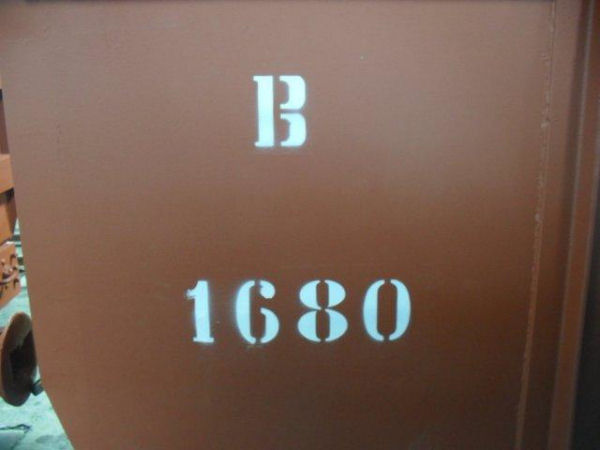 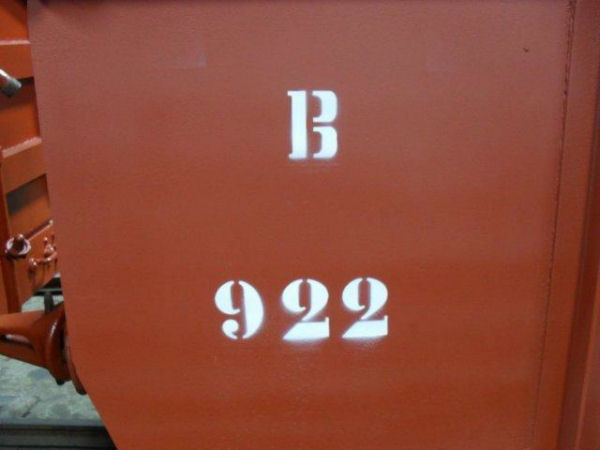 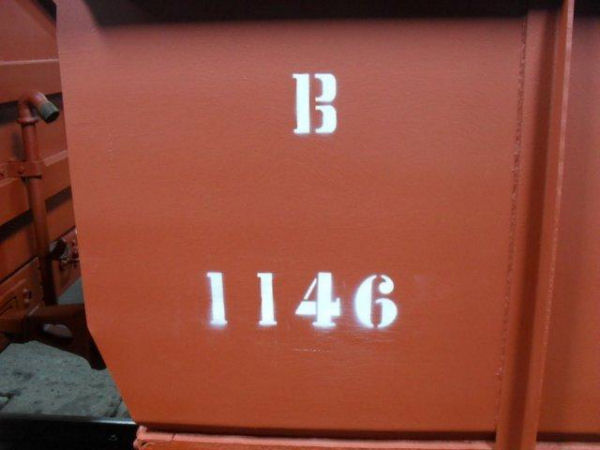 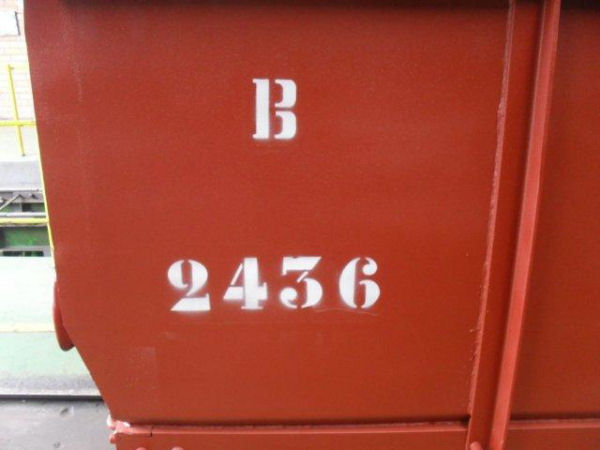 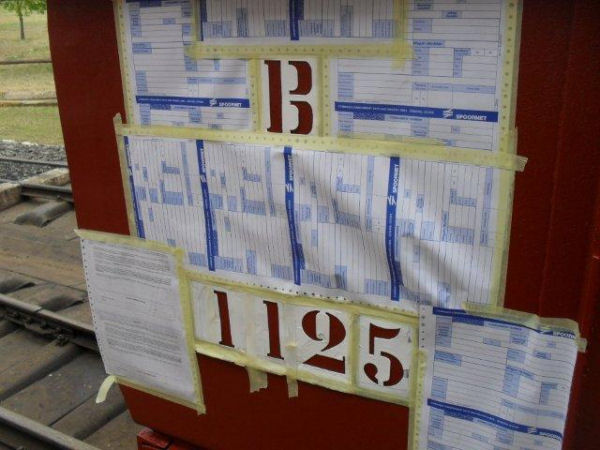 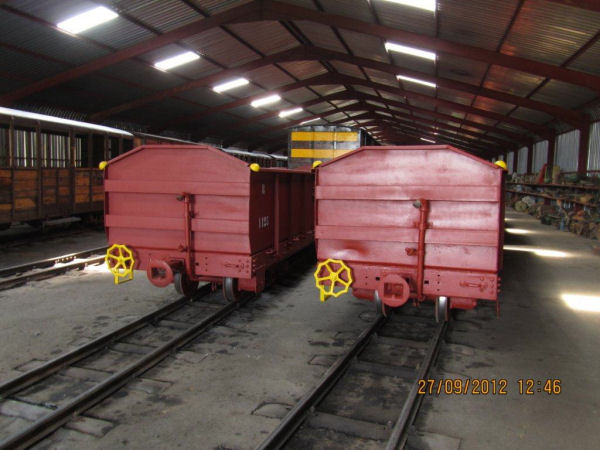 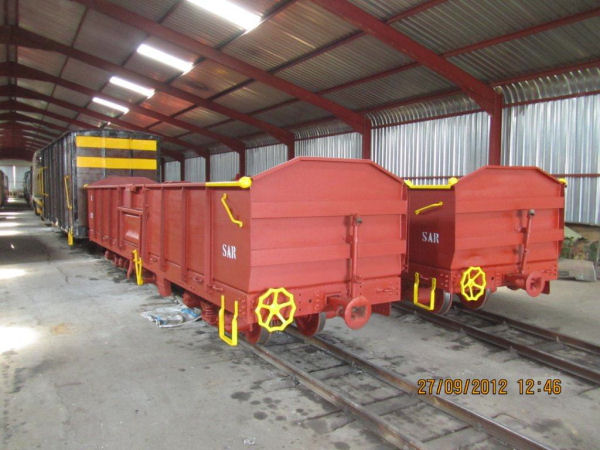 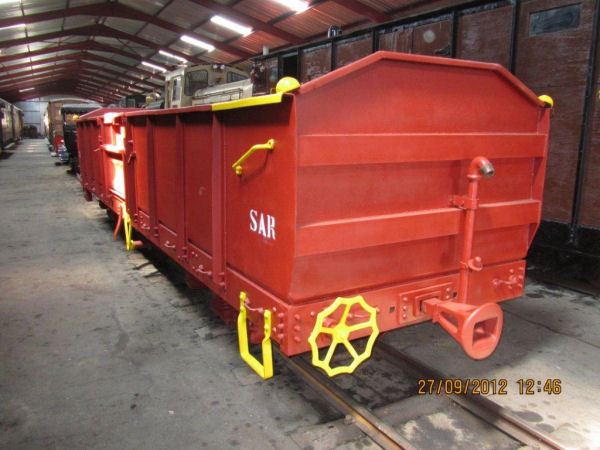 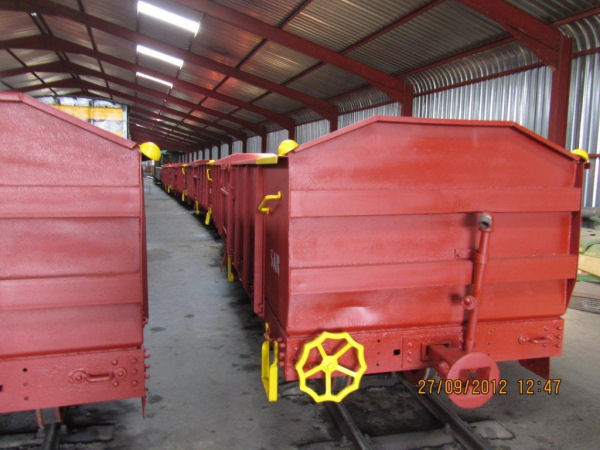 The Sandstone Heritage Trust attempts to reconnect with the past by restoring Otavi Rolling Stock.

The Otavi Railway has a magical quality about it.  It has been well documented and in many ways appears to have been the ultimate application a 2-ft Narrow Gauge railway.  Of course it gave birth to the renowned NG15 series locomotives.  What is less well known is the fact that they had a very useful cross-section of rolling stock, both passenger and freight.  Sadly we have got no evidence that any passenger stock survived but we have been able to acquire three original Otavi freight wagons, the first of which has arrived on the farm as per the photograph below. 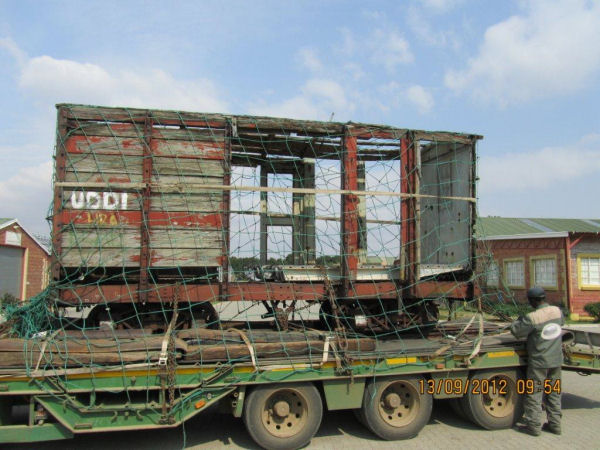 For those Narrow Gauge enthusiasts who visit our web site, David Payling has prepared a very useful summary of the history of the Otavi Railway which appears below.  Our sincere thanks to David for taking the time and trouble to prepare this for us.

The Otavi Railway was opened throughout on November 12th 1906.  It ran from the coastal town of Swakopmund in the German colonial territory of South West Africa.  Crossing the 80 miles wide Namib desert on a steady 1 in 60 gradient, this 600mm gauge line ran some 356 miles North Easterly into the territory’s more fertile interior.  Its primary destination was the rapidly growing town of Tsumeb where rich lodes of copper ores had been discovered, together with other valuable metals.  Construction of the railway had been commissioned by the Otavi Mining and Railway Company (OMEG) to allow the products of the mines to be carried to the ships at Swakopmund.  The mines and the railway thrived during the colonial period with a growing traffic of farm produce and passengers to complement the metals and ores.  In 1912 it was the birthplace of the Hd 2-8-2 tender engine (later becoming SAR’s Cass NG5).  The first three engines made light of the 80 miles climb from Swakopmund through the desert.

All this came to an end with the outbreak of the First World War.  British warships shelled Swakopmund and the Germans removed the smaller boats from the harbour and ferried them inland on flat cars of the Otavi Railway to deny them to any invaders.  When South African and British troops arrived in 1915 to conquer the territory they found the railway sabotaged and unusable for many miles inland.  They rebuilt it as they advanced across the desert, but to Cape Gauge.  Ever after, goods from the interior had to be transhipped at Usakos, which was also the headquarters of the narrow gauge, where its depot and workshops were located.  After the peace, South Africa was mandated by the League of Nations to administer the territory, with SAR becoming the operator of railways.  Despite the management of the railway becoming the responsibility of SAR, the narrow gauge enjoyed a lot of independence in its decision making.  This is probably the reason why the motive power policy almost to the end continued to favour powerful tender engines capable of carrying their own water and fuel supplies to work over the long distances between servicing points.  This led, in 1931, to the appearance of the first NG15s, although by that time Garratt locomotives were proliferating throughout SAR’s narrow gauge lines in Natal and the Cape.  At its height the Otavi was carrying enormous tonnages of metal ores and refined metals from the Tsumeb smelter, plus much dairy and other agricultural produce.  Passenger trains offered sleeping and dining accommodation.

By the 1950s, an increased requirement for cost containment led to the decision to dieselise train services in the territory rather than to bring coal supplies over the vast distances from the coalfields in Natal.  The growth of Otavi traffic and the costs of transhipment at Usakos were dealt with by the proposal to broaden the gauge to Cape Gauge and to dieselise.  This was completed in 1960 and the last narrow gauge trains ran on Sunday November 27th, accompanied by scenes of great celebration.  After this most of the narrow gauge equipment was scrapped although the fleet of 21 NG15s found a new life at Port Elizabeth.  Two NG5s were saved, one (No.40) being plinthed outside Usakos station whilst No.41, sponsored by its builder, Henschel, and the local male voice choir, was plinthed outside the station at Otjiwarongo.  As a farewell gesture the Usakos workshops cosmetically restored a short train to represent the early days of the line.  It was headed by Henschel Hb class 2-6-2 tank engine No.56, displayed as running latterly with a tender.  Its train included a short wheelbase open wagon, a covered bogie van, a freight guard’s van and a balconied carriage with first and second class accommodation.  They were displayed in the capital Windhoek, outside the Alte Feste (Old Fortress) on Robert Mugabe Avenue. That ended the story of the Otavi Railway, one of the world’s longest 600mm gauge railways.  In its day it had thrived and carried out all that was asked of it, tackling its challenges with a most impressive display of engineering innovation. 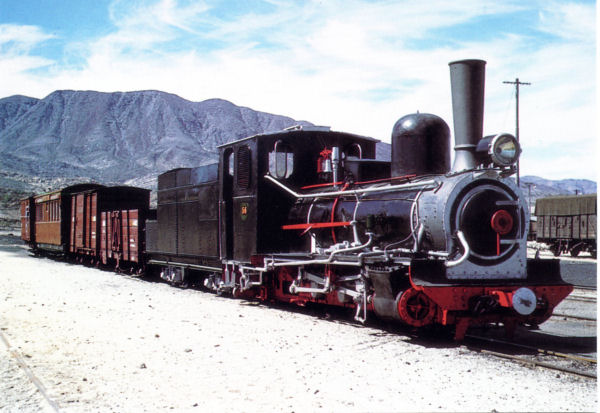 After the closure of the narrow gauge, Henschel Hb locomotive NG56 was prepared for preservation at Usakos.  It is shown standing outside the workshops, newly restored, with its bogie tender, open and closed
freight cars, a passenger car and a guards van.  TransNamib Museum

We will continue to publish updates on our progress with regard to the Otavi Rolling stock.

Every year, Sandstone Estates in the Eastern Free State hosts an event in honour of South Africa’s industrial heritage.

The 2012 event celebrated the centenary of the Class Hd locomotives of the Otavi Railway in German South West Africa. These locomotives evolved into the famous Class NG15’s - otherwise known as “Kalaharis”.

To protect our dining car from the elements we have erected a steel structure over it which will make it easier to keep it in good condition. 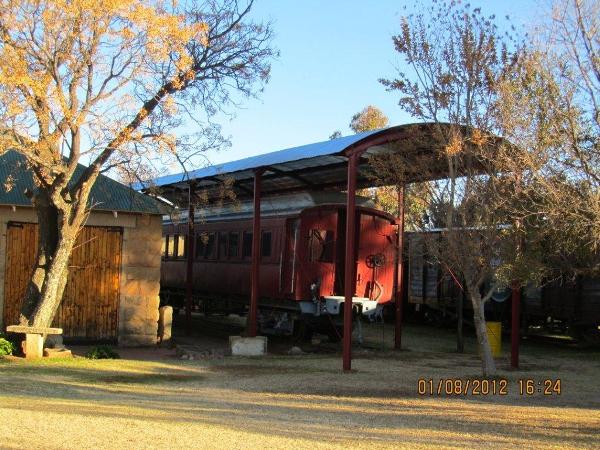 The Sandstone Heritage Trust has long enjoyed a good relationship with Narrow Gauge World, a top class UK publication with international distribution. An on line version is now available. 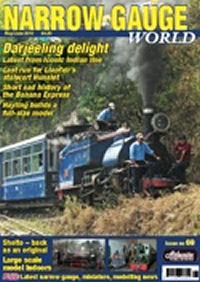 Preparations are underway to erect a building over the venerable 1920 Dining Car at the Waenhuis to protect it from the weather. 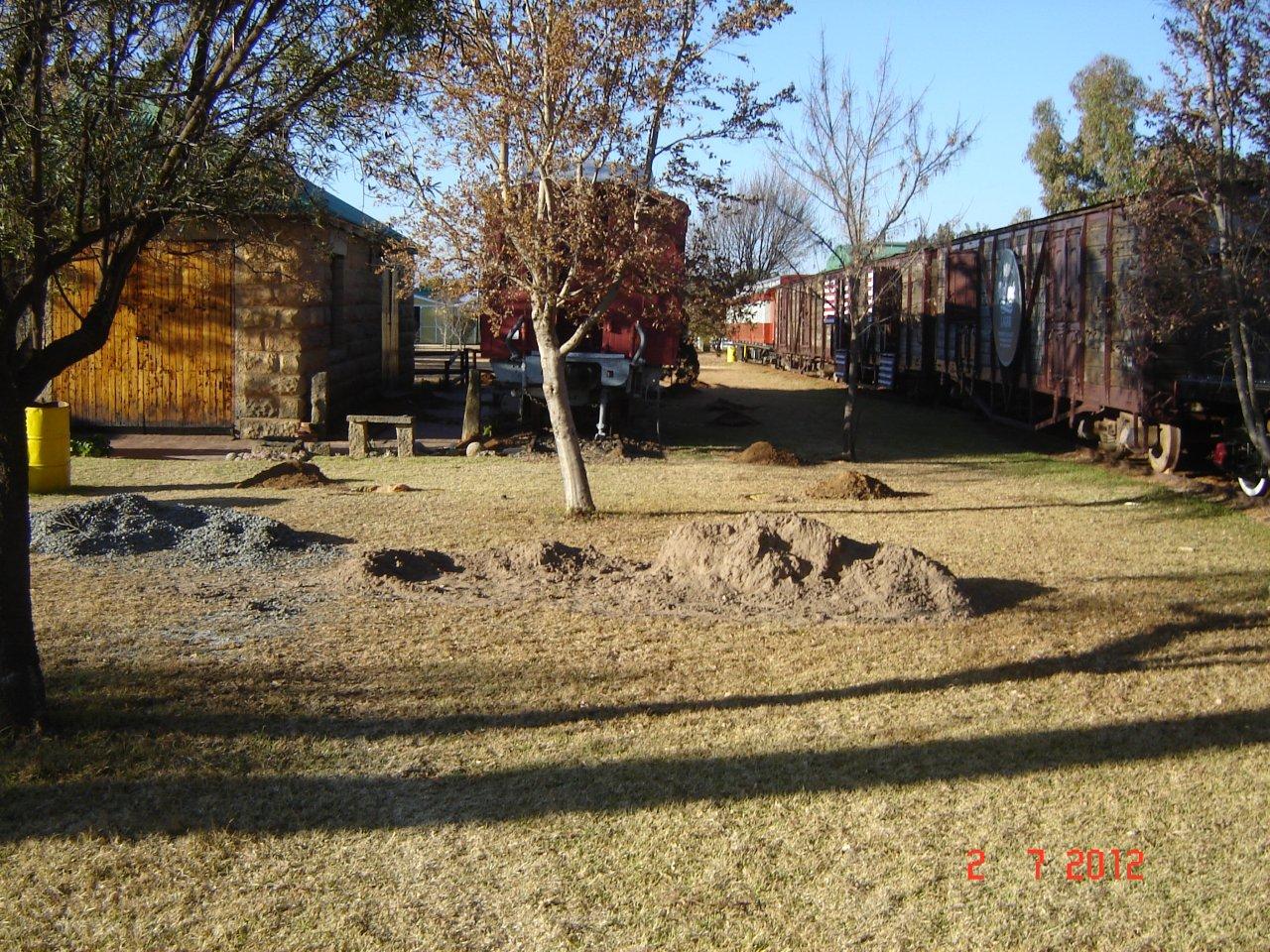 From a garden in Boksburg to a working Coco Pan in 3 weeks... 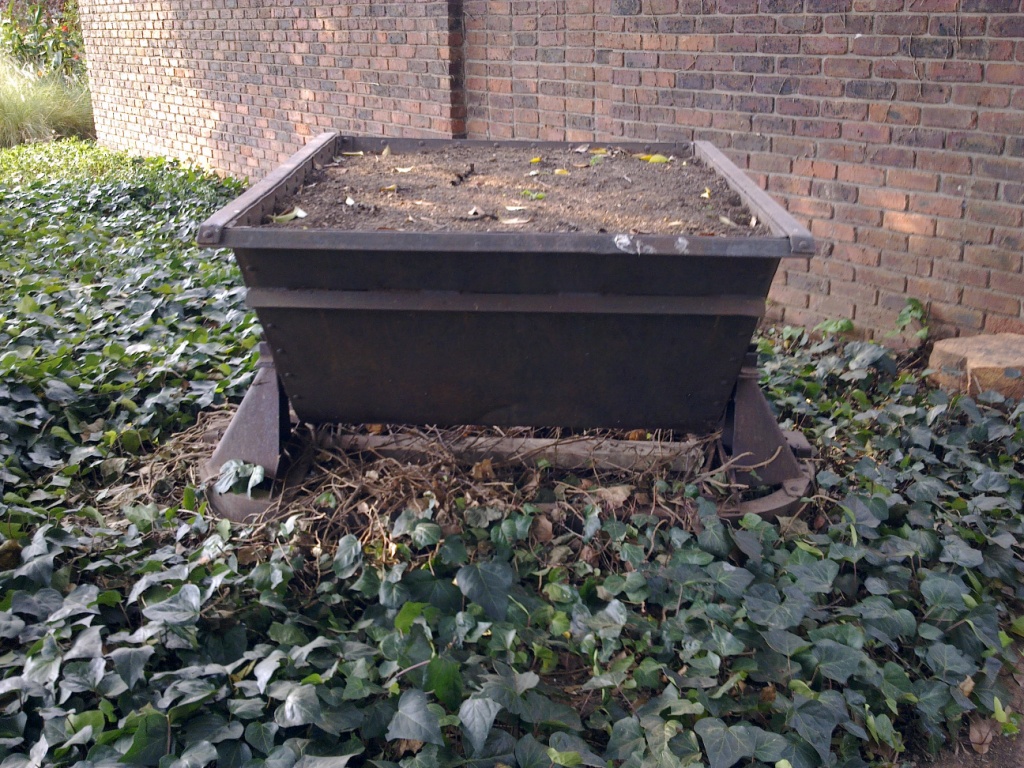 A completed Dz and a ST under restoration... 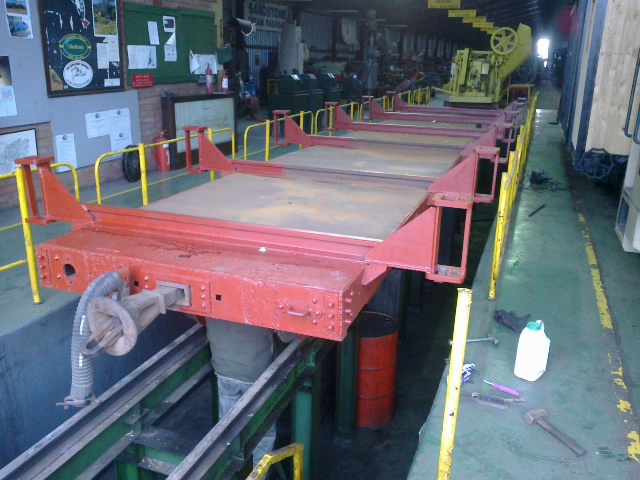 Expansion of our Salvage yard

A shed has been erected to house surplus NG Railway components and spares.

It is adjacent to our security Barracks. 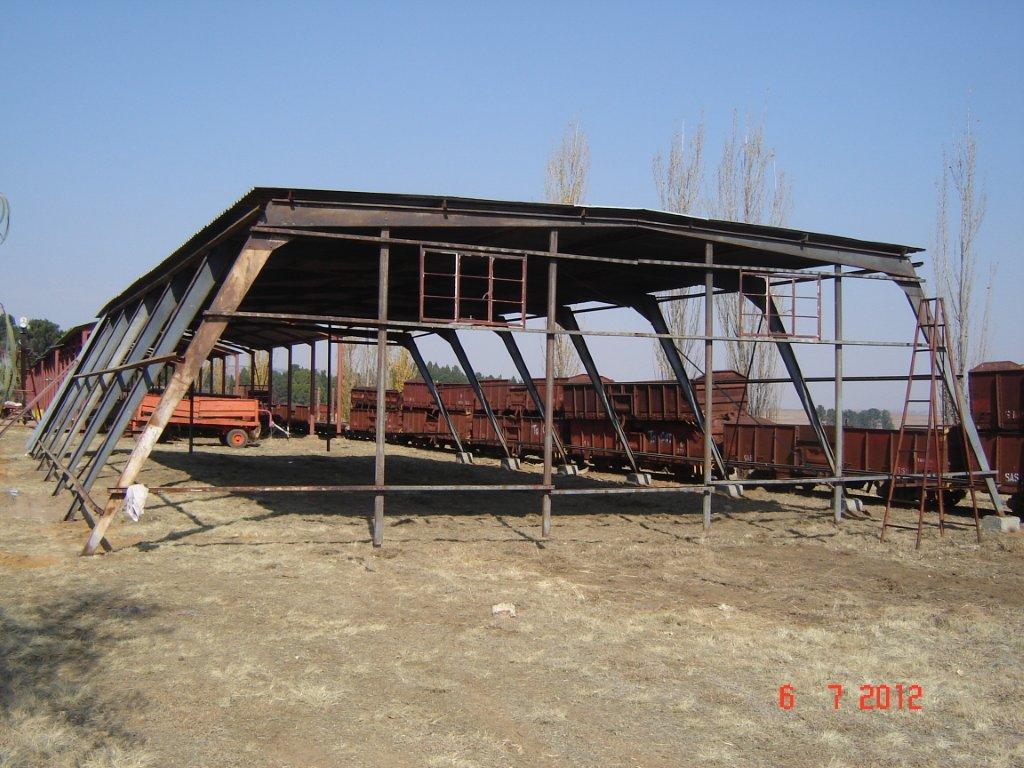 Stevens Mechanical who have been working on Boilers and restoration work for us for more than 10 years now have their own web site.