Jannie Du Toit who is unquestionably the top Farmal owner and restorer, not to mention expert on these wonderful tractors, has done it again. This beautiful Farmal cub was in an untidy condition when Jannie received it. It is now like new. Oom Jannie, from all of us at the Sandstone Heritage Trust, congratulations and well done!

Herewith is Jannie’s full restoration report, which will be of interest to vintage tractor collectors worldwide:

The 6 volt generator I replaced with a 12 volt alternator. 6-volt batteries are difficult to obtain, no more mass production, not reliable and only handmade.
The pulley on the crankshaft was loose, resulting in an oil leak and the two brackets for the crank-handle were broken off. The pulley was removed, so was the timing cover and the old oil seal replaced by a new one and the two brackets on the pulley built up.

The cylinder head was removed to extract a broken bolt (one of two for securing air cleaner) and decarbonised the engine. I did not remove the pistons and no new rings were fitted. Did not find it necessary.

Removed the steering box. Serviced it, tried to limit play and fitted new bolts, a dowel and gasket. Play was excessive, is reasonable now. The front axle was removed. Both the steering arm knuckles were welded onto the stub axles. Had to cut them loose and build them up to original. Because the right hand extension had a repair and not professionally done, I replaced it with a second hand one. Did not replace the front wheel weights and will advise to leave them off.

The power take off was out of order. The shaft and rod was damaged and worn and the guide and lever missing. I managed to get new parts from the States. Works fine now.

Had to strip the rear axle. The left brake lining had to be replaced with a next to new one. I did not change the oil in the gearbox. Had the seat covered, a complete new battery box and covers made and front screw.

The platform under the feat was warped. I removed it and straightened it. This procedure was important to get the brake pedals lined up. The teeth on the governor sector were worn and I replaced them with new ones.

Forgot to mention, when I opened the left final drive to get the brake lining, I also replaced the leaking oil seal with a new one in the bearing retainer in the transmission case. The drawbar and brackets I had copied from parts I borrowed.
To keep costs low, I did not make the swing drawbar and anchor. There might be one at Sandstone Estates and is simple and easy to fit.

A complete new harness was made up and new battery cable with terminals. A pilot light and toggle switch (not original) was fitted because the switch on magneto models cannot be used with alternators. The pilot light only warns you when the toggle switch is on or off. In the off position, it does not charge and leaving it on, it discharges when the engine stops.

The bonnet and tank got its necessary attention with some minor repairs. A complete new radiator screen was made by me and fitted. All old paint was removed by hand and no sandblasting was done.

Rear light with new lens and reflector, 3 bulbs, 3 lens gaskets and a new 12-volt battery were also fitted.
The Farmal cub is painted and looks really smart with her decals. I am quite happy and satisfied with a job well done.” 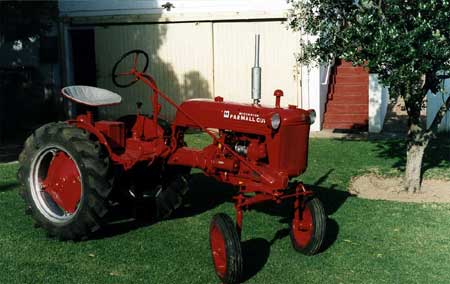 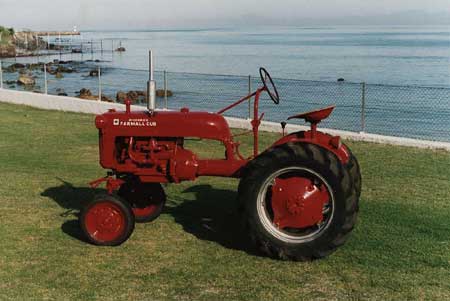 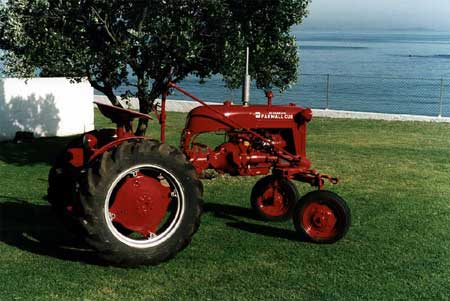