Chairman of the Tractor Challenge 2006, Mr Doug Newton, opens the presentation by welcoming all to Lackham College;
On behalf of the Challenge Committee he thanked:
Pete Murton of the 9th Supply regiment Buckley Barracks for the use of the airfield and their help and support.
Mr John Eavis and his family for the use of his field also the other local farmers whose land we used for parking etc.
Wiltshire Police, Matt Armstrong PS, from Malmsbury division, was totally unflappable and did everything in his power to make the event as safe and secure as possible with out taking the fun away, even when there was a threat that the M4 would come to a grinding halt he was still smiling.
Dave Hooker, whose large donation gave the challenge a great jump-start?
Bernie Fishlock, Whose field layout has now been adopted by other challenges worldwide.
John Dixon, of Lackham College who did not realise what he let himself in for, when he told John Collingborn, “no problem we restore a tractor every year”
Gill, Garth & Gary Wilson. From South Africa who came over for 10 day’s just to help and support the challenge, and did everything from empting the loo’s, to setting up the site.
Tractor & Machinery Magazine, who donated Matilda, a Fergie T20 for our raffle prize that we took around the country promoting the challenge.
Geoff Sheering, from Grapevine charity, who spent many, many hours chasing around the country, to make our outstanding DVD of the challenge the success it is.
All the companies, clubs, associations, and individuals, that supported and believed in us.
The people and transport companies, who brought load after load to the challenge, for no reward other that to be part of the greatest agricultural event this world has ever seen.

OUR SPONSORS, Richard Sivil of Vapormatic who has given more than we ever hoped for, not only with the parts to restore poor old George, but world wide advertising, promotion, and constant support to Lyn & John Collingborn and there team.
Each and every sponsor gave all they could to make this challenge the success it is. And for that we thank them all from the bottom of our hearts…………
Mr Chairman then handed over to Richard Sivil of Vapormatic, who spoke emotionally about the challenge, and how John Collingborn had phone him and said “ Vapormatic need’s to be involved in the rebuild of poor old George, an old Fordson Power Major, That had been given to the challenge by George Walker of Norfolk. And was in need of a little restoration? After which it would be the draw prize for a one lucky driver in the challenge. He will never get over the shock when his first saw poor old George at Lackham College.

Richard finished by saying that, everywhere he looked whilst he was taking part in the challenge driving Wyndham Mullins International 634 he could see smiling faces, seven months after the challenge, countrywide people are still reliving the challenge and still smiling…

Over to John Dixon
John Dixon of Lackham College spoke of the rebuild of poor old George, once again saying that John Collingborn was a good sales man, John C told him also, that he had a tractor that needed a little restoration!! When he met the challenge team at Pewsey show, Poor Old George was displayed on the lorry, “he say’s he felt his colour draining away as he first set eyes on this Fordson Power Major” Well he guessed that’s what it was once!! WHAT had he done!, In true British spirit.

On the 10th February 2006 at about 3am John Dixon started up poor old George to a round of applause from a team of Lackham student and lectures that had worked with out a stop for 20hour to
Restore poor old George to his former glory, what a sight. 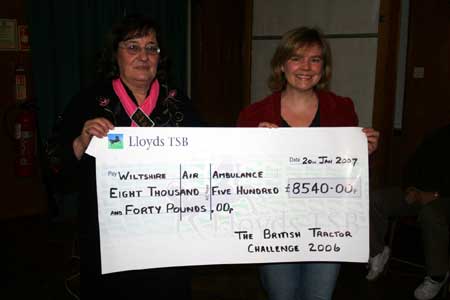 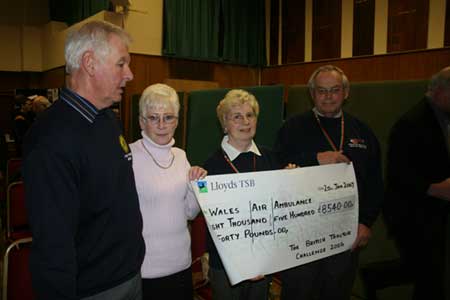 Saturday 20th January 2007
Cont;
Derek Taylor, the Commentator at the challenge, invited Tracey Edwards from Wiltshire Air Ambulance and Madelyn and Mervyn Thomas from Wales Air Ambulance to come forward to accept the cheques of the money raised on behalf of the British Tractor Challenge 2006.
The challenge secretary Mrs Stephanie Evenden presented both air ambulances with a cheque for £8,540.00 each..
Both charities gave a short thank you speech, and thanked each and everyone who supported the challenge in turn raising much needed money to keep the air ambulances flying.
Derek then presented Stephanie Evendon and Shirley Mullins with a bouquet of flowers to thank them for being Lynda’s left and right hand during the challenge…
Derek finished by thanking all for coming, also all that supported the event, John and Lynda Collingborn and their team.
The company known, as the British Tractor Challenge 2006 will now be closed,The British Tractor Challenge 2006 raised £58,394
Cost to stage the event £41,714
Donation to our two charities £16,680The Challenge also donated money to help rebuild burnt out children’s nursery in Hullavington village £500.00 to compensate for any inconvenience incurred during the event.. 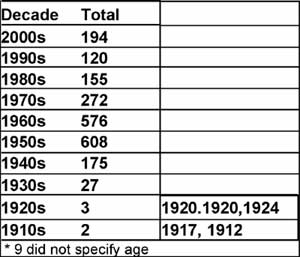 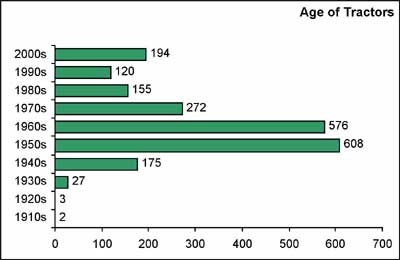 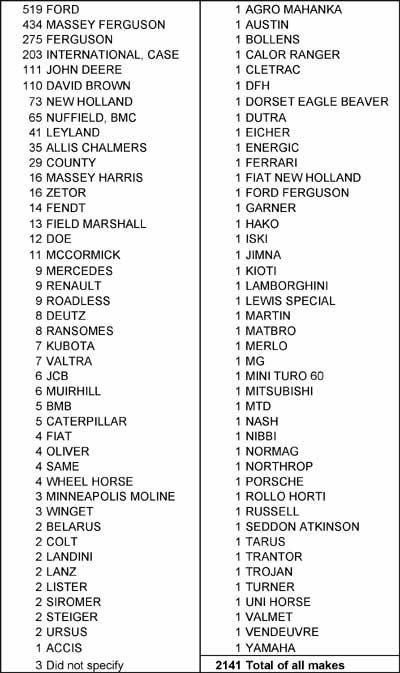