Subject: Re: a day to remember
Hi Chris,

I was the fireman on 3052 who provided you with all that nice smoke you ordered (well, with a bit of help from the mechanical stoker!) and I just want to reinforce what you say - it was indeed "a day to remember".

We had been in Ficksburg since Tuesday to prepare the loco. We had already taken her to Komandonek the day before to extract our two NZs and four coaches from the string of old vehicles in the siding there.
That was hard work - couplers refused to couple and uncouple, every vehicle seemed to have vacuum leaks, and many had vacuum pipes in awkward positions necessitating the use of double-ended extension pipes. The Spoornet pilot and track official from Bethlehem who helped us with the shunt were invaluable - in fact they were great for the whole event, and we want to express our thanks to them - it was a pleasure working with them.

Eventually we had the load made up and we headed back to Ficksburg. As you say, we eventually decided to drop the two NZs. Although both had been roadworthied by Spoornet Carriage and Wagon, we eventually decided they were more trouble than they were worth. We were told their numbers (51118416 and 51057751), but neither had any identification so we didn't know which was which, and on our vehicle list we called them NZ2 and NZ3 in deference to large red spray-painted numbers on the sides.

3052 steamed flawlessly. There were small problems with ejector, steam reverser and lubricator which didn't affect performance. I was particularly grateful that the mechanical stoker worked so well, even though it was missing a fine coal jet. FOTR members will remember the time a couple of years back when the stoker failed on our 3094 during a two-day photographic charter and she had to be fired by hand. Nathan and I then spent half the night on our knees grubbing compacted coal dust out of the worm with our bare hands by torch-light. Not an enjoyable experience, but we got it working eventually.

We were also grateful that we didn't have to get stuck into the oil boxes on 3052's wheels. When we moved her from Mason's Mill to Ficksburg three years ago that was a major task for Mike and me. Each box has several trimmings in it at awkward angles and it took us the whole day to get them out, clean the trimmings and boxes, and then re-insert them.

We had a great day on 27th and the three round trips seemed to go very quickly. It was a great feeling being on the footplate and firing such a magnificent beast. The scenic backdrop made it even better. There was a great team spirit all round. What didn't go so quickly was the shunt at the end of the day - that seemed to go on for ever! But eventually Cliffie and I were able to throw out the fire and head off for a braai at Sandstone.

David Shepherd is a charming and interesting character and I think we all enjoyed chatting to him. There's no doubt he enjoyed the experience on the footplate of his loco. We all enjoyed the hospitality at Sandstone. For the Friends of the Rail crew (Cliff Petzer, John Dadford, Mike Haslam, Kobus Steyn and myself) it was definitely three days to remember. 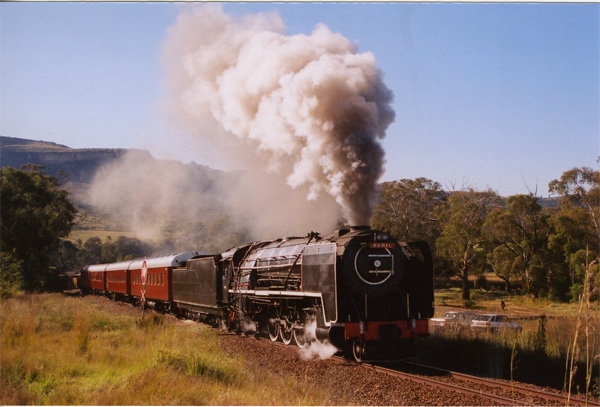