A group of dedicated railway enthusiasts from Britain, the United States and Japan arrived at Avontuur at the end of the world renowned narrow gauge railway line which runs the whole length of the Langkloof in the Eastern Cape in South Africa.

The NG15 looking strong and confident steamed into Avontuur just as the sun slipped below the horizon on Friday evening 9 September 2005.

Thus ended a memorable 3-day rail experience which started at 9am in Port Elizabeth on Wednesday 7 September 2005. On the first day the NG15 with its ten unit consist worked its way up the line over the Van Staden's River Bridge and then up the Gamtoos Valley on the Patensie extension. While the engine night stopped at Patensie Station the visitors were disbursed to various local guest house accommodation for the night. New friends were made around the campfires under starlit skies.

On the following morning the train travelled down the Gamtoos Valley, through Hankey and joined the mainline heading for Assegaaibos. This excellent central depot on the Avontuur line had all the facilities to host the locomotive and her crews for the second night while the guests travelled a short distance to the Tsitsikamma Lodge on the international renowned Garden Route for a pleasant evening at a top class establishment. 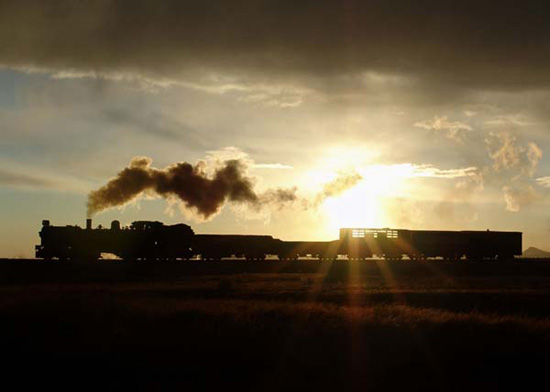 The next morning saw the train depart at a leisurely 9am for arguably the most exciting section of the line, namely the Joubertina "Louterwater" Avontuur section. The locomotive seemed to get better and better, pulling its rake of carriages, many of which worked over 100 years ago. Numerous stops were made to allow the photographers to capture special sections of the line. Due to the slow water delivery at Louterwater, the train was delayed for an hour and a half which delayed the ultimate arrival into Avontuur that evening, but it made no difference to the visitors. The ever-present NG15 was there to be photographed and to provide the reassuring thought that this train's final destination was in Avontuur come what may.

Through the co-operation of Spoornet, the Apple Express and the Sandstone Heritage Trust who trucked their NG15 and tender some 800 kilometres from its base in the Eastern Free State this trip was made possible. International visitors were quick to realise the potential and acknowledge the historic significance of this trip and indeed every aspect of the 3-day experience.

Many words will be written about this and thousands of photographs captured and published.
In the words of one visitor, Peter Lemmey "we travelled the distance from Waterloo to Exeter behind the same 2ft gauge locomotive – undoubtedly the Port Elizabeth to Avontuur journey was the narrow gauge event of the year world-wide"

A very special experience put together through close co-operation by many people, staffed by a highly competent and dedicated crew from both the Apple Express and the Sandstone Heritage Trust.