UK based Steam Loco Safari Tours visited Sandstone on the 19th & 20th May as part of its South African rail tour. This is the first tour to this country for a couple of years and was in a new format in that all travel between the various rail locations was by coach and not train. This enabled more locations to be visited in the time available to the group.

For the two days at Sandstone, master photographer, Dennis Moore, had drawn up a plan that gave multiple photo opportunities along the 11,6 km Sandstone line from dawn to dusk on each day plus a chance to visit the rail workshops and other attractions at Sandstone.

Five locomotives were in use over the period with NGG16 no: 113, NGG13 no: 49 and NG15 no: 17 in use on Day 1 together with the Lawley no: BR7. Day 2 saw the same locos but with the Lawley replaced by the Fowler 0-4-2T , "Sandy".
The very nature of the line at Sandstone with its multiple changes of direction enables photographs to be taken at similar locations in both the morning and afternoon giving completely different shots at each time.

Class NG15 No. 17 leaves Hoekfontein Class NGG16 No. 113 & NG15 No. 17 at Grootdraai
Two separate trains ran in similar directions so that the tour group could get the best locations with different locomotives and train consists.

Thursday morning saw the NG15 and NGG16 operating towards Vailima while the NGG16 took the train up to Vailima Halt. This section of the line had recently been damaged by a washaway but had been repaired in time for the tour. During the afternoon the NGG13 and NGG16 double headed to Vailima. At lunch time the Lawley ran through to Grootdraai as well as Pandora Pond.

An added attraction for many of the guests at lunchtime was a trip in the 1951 AEC Regal single decker bus donated to Sandstone by John Allen.

Class NGG13 No. 49 & the Greens Roller Class NGG16 No. 113 approaches Vailima Halt
Friday morning saw the two Garratts and NG15 on the Grootdraai section with "Sandy" running at lunchtime in the workshop and past the grain silos. Sandstone's Greens steam roller was also included in a number of shots. The final afternoon comprised double headed Garratts to Vailima and the NGG16 to Vailima Halt. A stunning sunset produced a beautiful golden glint to round off the two days.

The tour was blessed with perfect clear skies for the two days enabling a crisp timetable to be adhered to. In total 88 runpasts were created which must be something of a record in two days. In the days of 14 day railtours, 100 runpast opportunities was considered exceptional.

Class NGG13 No. 17 at Pandora Pond Double headed Garratts pass the Lawley at Nooihoek
Tour organiser, David Rodgers, was exceptionally pleased with the Sandstone experience and is already planning a similar tour to South Africa, including Sandstone, in 2006. Members of the tour group were impressed by Sandstone and its attractions. Most of the group had photographed steam around the world and remarked that Sandstone was a unique location. A distinguished member of the tour was David Joy, editor of the premier narrow gauge magazine in Britain, Narrow Gauge World. David has been a strong supporter of Sandstone since its inception and we look forward to a great write up in his magazine. Many others of the tour group are regular photographic contributors to UK steam magazines and we are sure Sandstone will feature over the months to come.
Although faced with long hours and multiple locomotive usage the Sandstone rail team led by Gert Jubileus performed safely and impeccably to give our guests an unforgettable "Sandstone Experience" 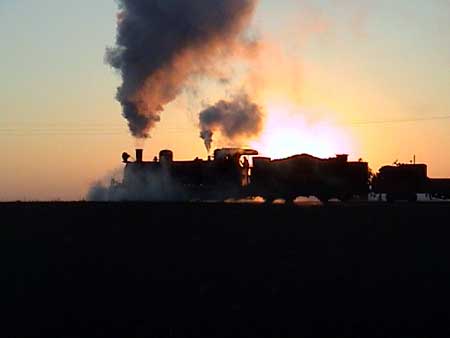