All the locomotives and rolling stock moved from Bloemfontein and Germiston are now in a covered facility at Sandstone. 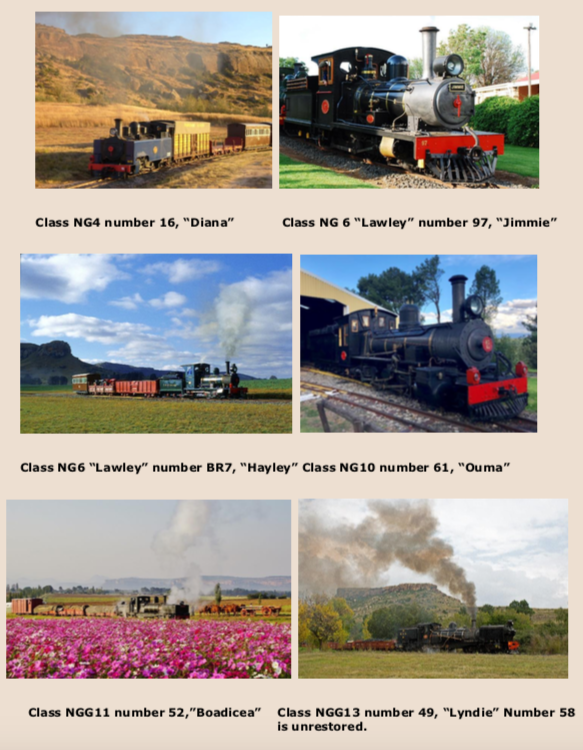 The Sandstone Railway stock list has been a feature of the website for many years. For 2021 we are adding a photo gallery of all our locomotives in 5 parts.

We hope you enjoy them! 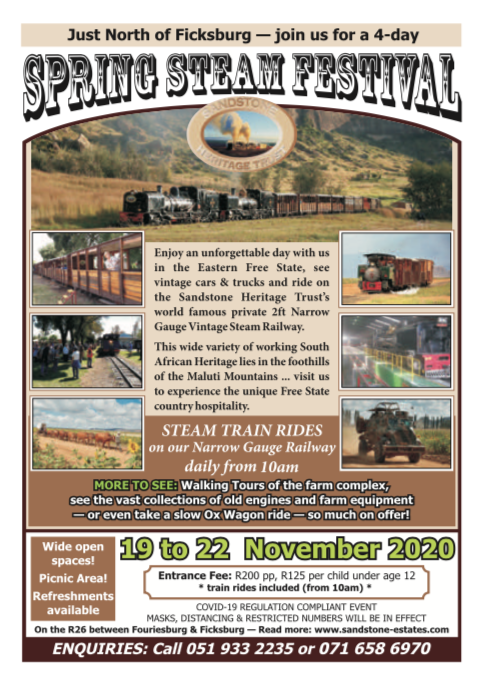 Sadly the Cherry Festival will not be held in Ficksburg in 2020 due to the Covid 19 pandemic but a number of local establishments will be open over the weekend of Thursday 19th November to Sunday 22nd November together with Sandstone who will be holding a steam festival over the four days. Sandstone has been closed since the pandemic began but will re-open  for visitors from November 1st 2020.

From the 19th November until 21st November Sandstone will be offering train rides together with walking tours of the Sandstone Heritage collection.

Please note that strict Covid 19 protocols will be followed and no one will be admitted if not wearing a mask. A screened temperature over 37 degrees will also result in non-admittance together with other members of the party. 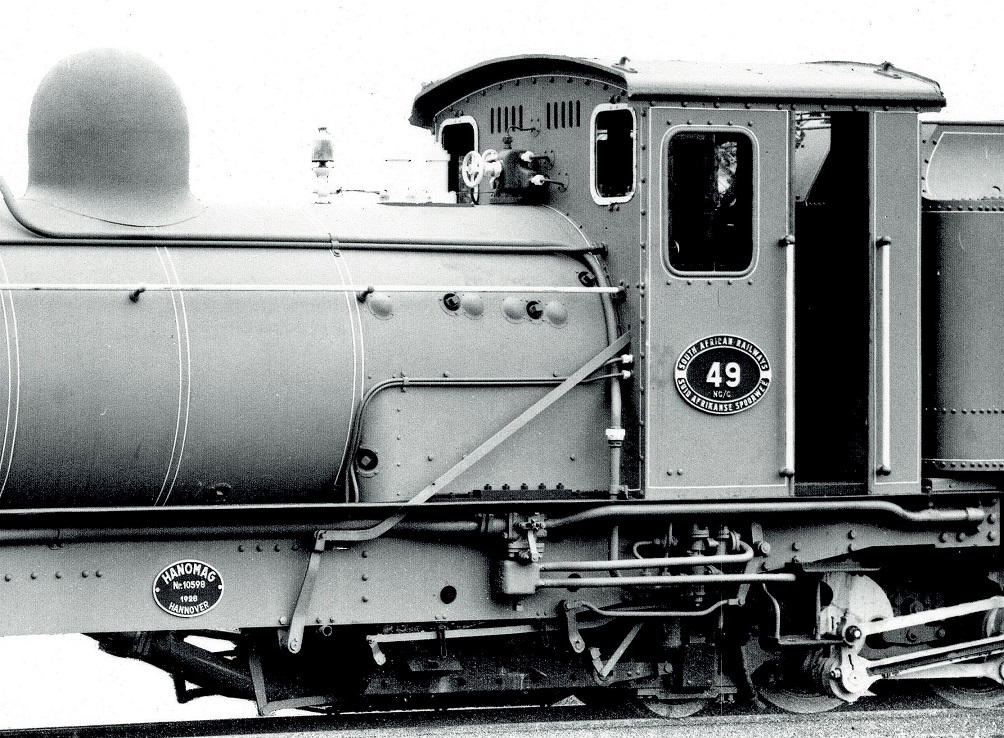 The Sandstone Steam Railway Stock List has been updated. The new version amends the incorrect Hanomag works number for NGG13 number 49 from 10599 to 10598. Information via Andreas Giller at the Hanomag Museum in Germany and Garratt Bucher in the USA confirms that 10598 is the correct works number for number 49. The attached pic courtesy of Hanomag confirms the information.

Our documentation extending back some 20 years has always detailed number 49 as Hanomag 10599 but after all these years the correct information has emerged. 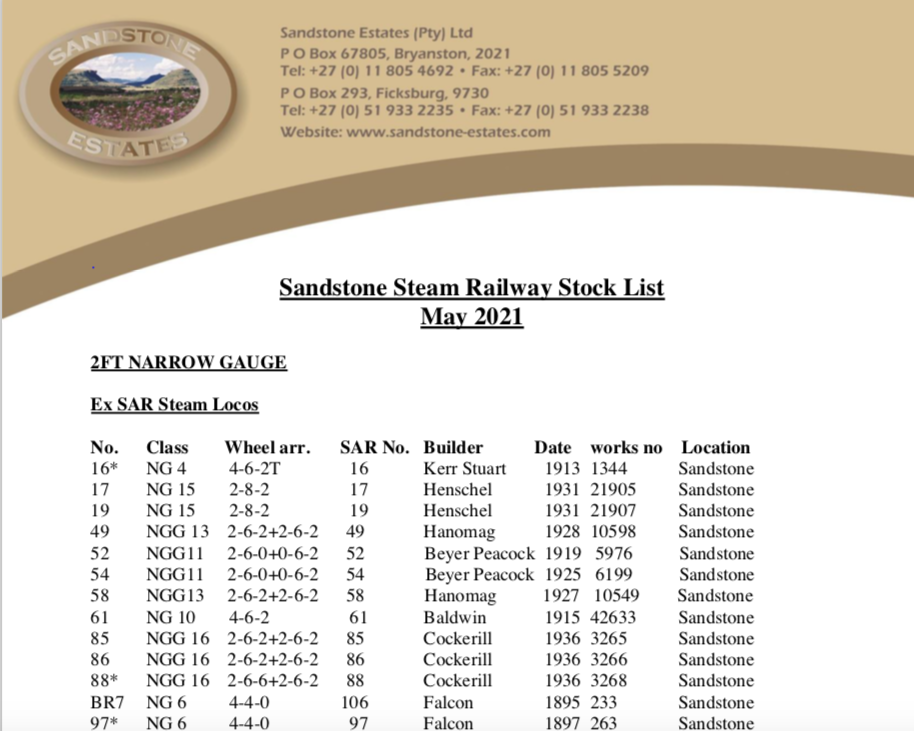 Sandstone Steam Railway has updated its stock list. The update corrects the build date of 15F 3052 and the disposal of four mainline coaches. - Click here to view

Sandstone Heritage Trust has a varied collection of stationary engines but one gem that is currently under repair is a Watermota K2 6hp twin cylinder 2 stroke inboard marine engine. These engines were produced by Watermota Ltd of Newton Abbot, UK from 1910 to 1955. Their long production run was testament to their durability and reliability. Also produced was the K1 3 hp single cylinder version. Both were used in small launches. The design was noted for its ability to feather the propshaft blades for forward, reverse or neutral obviating the need for some form of gearbox.

Watermota are also well known for their range of Ford Anglia based marine engines produced in the fifties and sixties.

Today the Watermota K1 and K2 types are highly prized as display engines around the world while some are still in service as light craft. The Sandstone example is having new brackets made for the ‘gear’ lever mounting, together with some seals and a new cam for the water pump. 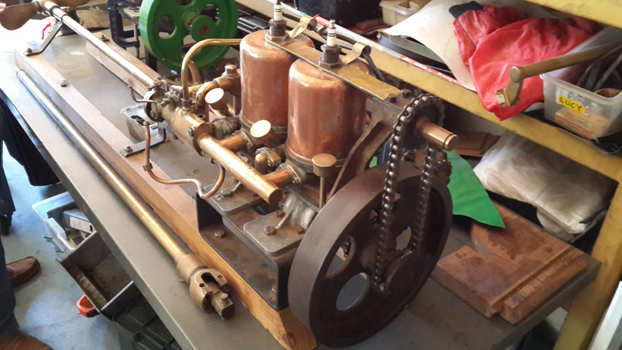 The Watermota K2 marine engine. Starting was by a crank handle on the top chain pulley.

Today Watermota is still very much in business supplying marine engines – particularly Hyundai Seasall as well as other brands, accessories and parts.

Sandstone is pleased to announce that the impending scrapping of Class 14R locomotive No. 1745 has been put on hold for the present. An Australian enthusiast and owner of an ex SAR locomotive in South Africa has expressed a desire to purchase some parts from 1745. In the interest of preservation Sandstone has agreed to delay any action with 1745 until the enthusiast has visited South Africa later in June 2015 and assessed the viability of a number of parts on 1745 for his use.

Letter from Grant Fryer regarding 14R 1745

Following on from the decision to scrap 14R No. 1745 we received the following letter from Grant Fryer at Hilton where 1745 saw service in the early 90s.

I trust this email finds you well. I have recently seen the post on Reef Steamers of the intention to dispose of 14R 1745.

This is a loco that is close to my heart. I grew up on the Hilton old mainline, at Sweetwaters. I have vivid memories of watching the trains going over the level crossing, including 14R. I am sorry I never had a camera back then. My love for trains continued and eventually I worked at Hilton station during those preservation years. When 1745 was saved it was certainly with joy in my heart. I also so loved the colour scheme she went into, almost giving her a royalty title. 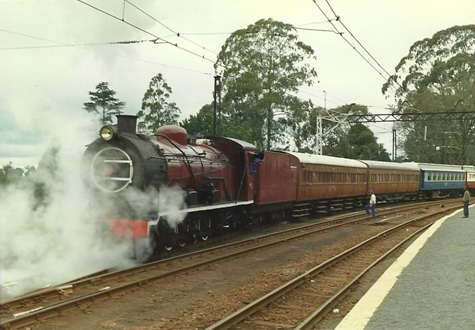 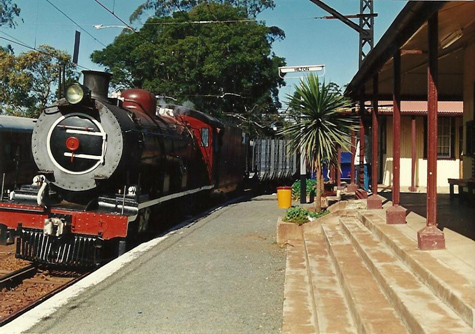 Today whilst cleaning at the station I came across a small book, ‘Locomotives of the Hilton line’.

Below are some scans of a few pages. 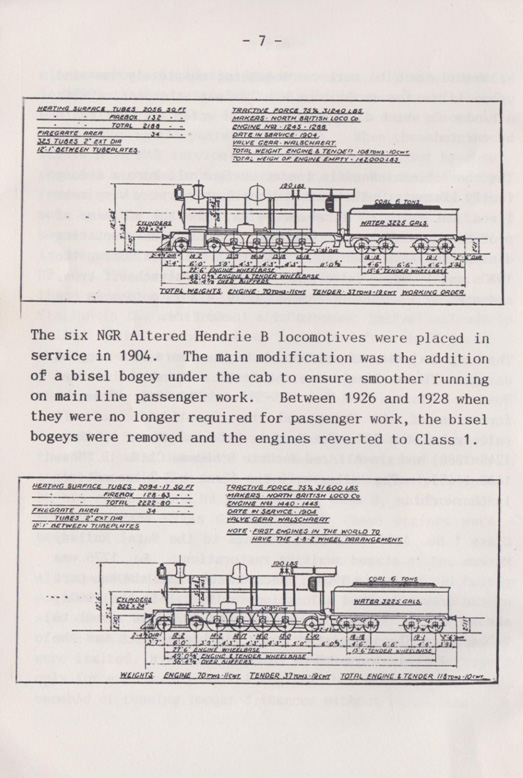 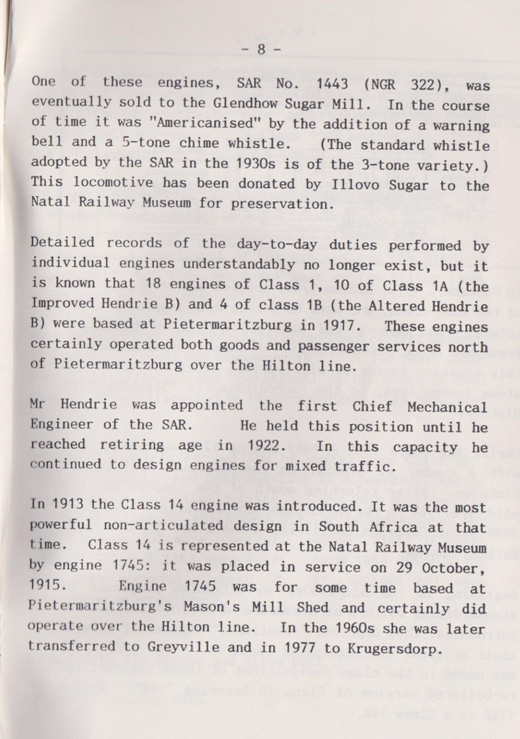 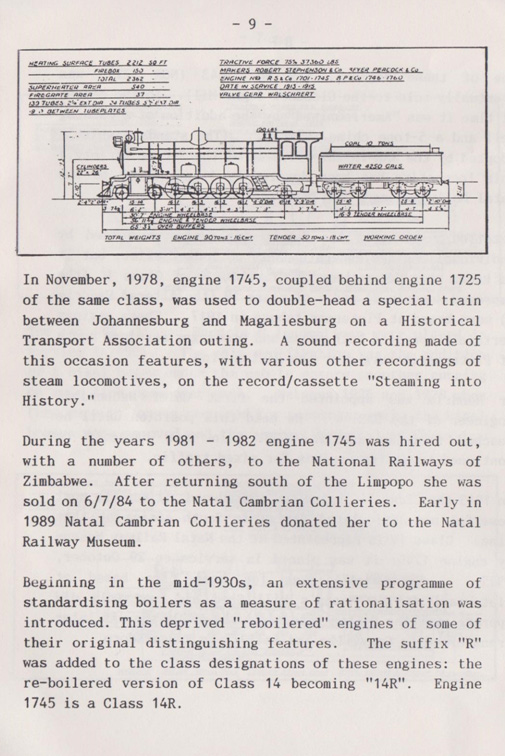 I saw her in 2013 when I was at Reefsteamers and took a photo. 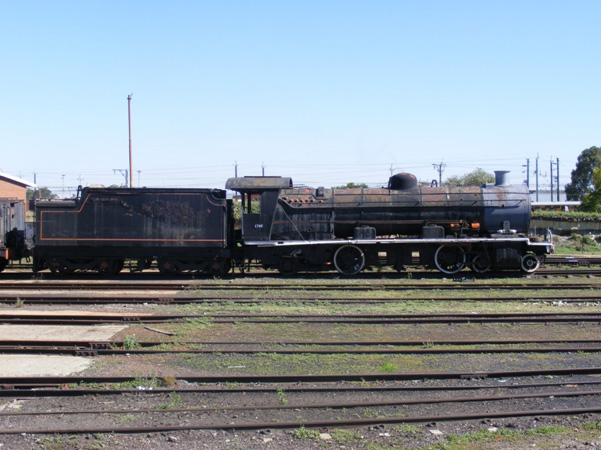 I was filled with heartache after knowing her so well, and it is really sad to see her on the way out.

The history of the steam locomotive is well documented as are many of the milestones in its development. It is possible, however, that the design of the Garratt locomotive type by Herbert W. Garratt – patented in 1907 – may have been one of the most significant steps forward. The design enabled a powerful locomotive to operate with a relatively low axle loading compared to conventional-style locomotives. The boiler in effect supplied two engines on a separate frame mounted on two power bogies. After Kitson, the locomotive builders, turned down his design, it was accepted by the Manchester based firm of Beyer-Peacock. They held exclusive rights to the design which then became better known as the Beyer-Garratt type.

The first Beyer-Garratt locomotive was built in 1909 for the Tasmanian Government Railways and is now restored to working order on the Welsh Highland Railway.

South African Railways were one of the first railway administrations in the world to show interest in the Beyer-Garratt as the constraints of the “narrow” Cape gauge and 2ft narrow gauge required innovative solutions for balancing power, axle loading and the ability to handle sometimes tortuous curves. With its ability to run either backwards or forwards and the effective power of two engines, the articulated design of the Beyer-Garratt was ideal.

South African Railways would ultimately operate the largest fleet of Beyer-Garratt locomotives in the world.

Surprisingly it was the 2ft narrow gauge system that placed the first order in 1914 but certainly to a lower spec than if it had been a 3’6” gauge version. They were of the 2-6-0+0-6-2 configuration but were unsuperheated and fitted with slide valves. Three were ordered (No’s. 51, 52 and 53), however the advent of the First World War saw their delivery delayed until 1919. On arrival in South Africa they were erected at the Uitenhage workshops near Port Elizabeth and put into service in May 1920. 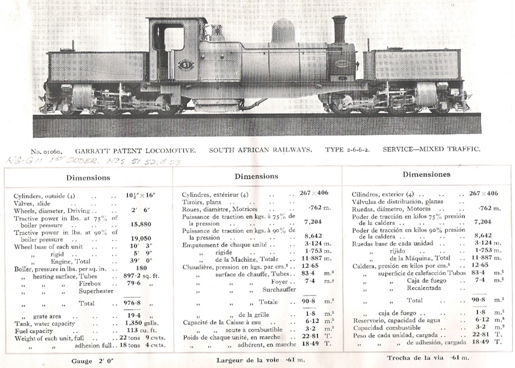 After initial trials on the Avontuur line they were all sent to Natal to work the Umzinto to Donnybrook line. The performance of these locomotives was considered extremely satisfactory and a further two (No’s. 54 and 55) were ordered in 1925, but with superheated boilers and piston valves together with a modified cab for better crew protection. Both of these survive in preservation today.

and returned to Port Elizabeth while her two sisters in Natal had different fates – No. 52 was sold to Rustenburg Platinum Mines and No. 53 was scrapped.

On the 1st October 1970, the locomotive allocations at Humewood Road show two Class NGG11 locomotives in stock, being 51 and sister 54 from the second batch. No. 55 had been plinthed at Weenen in Natal.

Sadly No. 51 was left unprotected in open storage and sea air at Humewood Road and deteriorated rapidly. Despite its preservation prospects, it was cut up at Uitenhage in 1971.

This left No. 52, now carrying No. 7 at Rustenburg Platinum as South Africa’s oldest Garratt locomotive.

No. 52 hard at work as Rustenburg Platinum No. 7 (Photograph by the late Dusty Durrant)

The locomotive was operational until around 1970 when the 2ft system was closed and was then preserved at the Kleinjukskei Motor Museum in northern Johannesburg. It survived there until the late 1980s when the site was redeveloped and moved to the SANRASM site in Krugersdorp. With SANRASM’s demise it was obtained by Sandstone and relocated to Bloemfontein for restoration.

Having been moved many times during its life and out of use since the late 60s, No. 52 was in poor condition on its arrival in Bloemfontein. Devoid of fittings and with motion and pivot damage, the restoration of the loco has been quite a struggle for Lukas Nel and his team.

Recently the work on the refurbished water tank and coal bunker has been completed. The boiler has been re-tubed and repaired where necessary but the lack of boiler mountings is proving a problem. Nevertheless the boiler will be hydraulically tested in the near future. 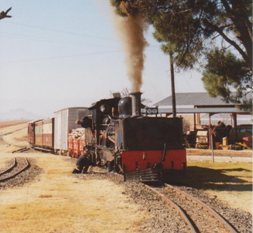 As No. 52 is one of the early batch of NGG11 locos with slide valves a major problem is the lack of available drawings for this type. Drawings exist for the latter two piston valve engines but the configuration of piping and boiler mountings is very different. For this reason Lukas will have to make up his own drawings and partially redesign some of these items. However, having restored sister loco No. 55 for Paton Country Railway in 2006 the restoration team will have some experience to draw upon.

This same lack of drawings is causing problems with the motion of the engine units where most of the valve motion and some of the rods are missing. Without the drawings, this is like a jigsaw puzzle with many missing pieces! However, some drawings and photographs have been found at the Manchester Museum of Science and Industry (MSOI) in the UK. The MSOI hold the Beyer Peacock archives and it is hoped these new-found drawings will assist the Bloemfontein team.

Repairs are also required to the boiler cradle and cab cradle which are badly bent from a lot of moving of the loco over the years.

The restoration will be completed in time for the next Sandstone event in 2017 where it will be the star of the show. As South Africa’s oldest surviving Garratt and the forerunner of the largest Garratt locomotive fleet in the world it will be well worth waiting for. 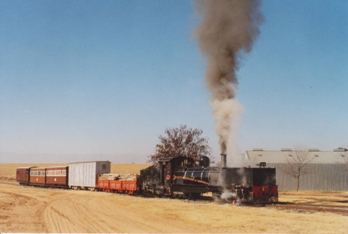 No. 52’s younger sister No. 55 on trial at Sandstone after restoration in 2006 before being transferred to her new home at Paton Country Railway. 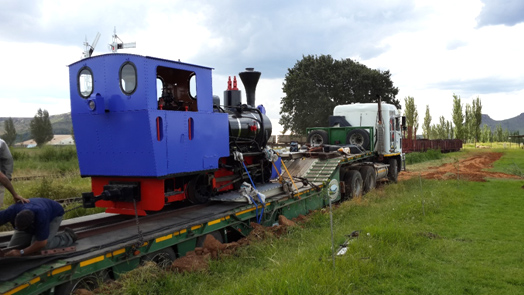 This locomotive, built in 1936 for The New Machavie Gold Mining Co. Ltd near Klerksdorp, has been moved from Bloemfontein to Sandstone and is currently undergoing steam trials prior to its unveiling into service at the Stars of Sandstone 2015 event in April. Rescued from a derelict state at the old SANRASM facility No. 12691 is resplendent in a new blue livery and joins a number of its O&K sisters at Sandstone. 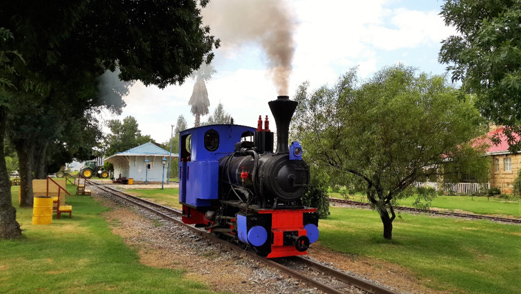 Steaming through Hoekfontein Station on her first run 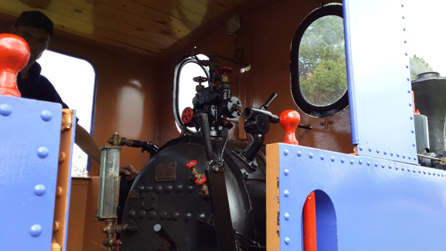 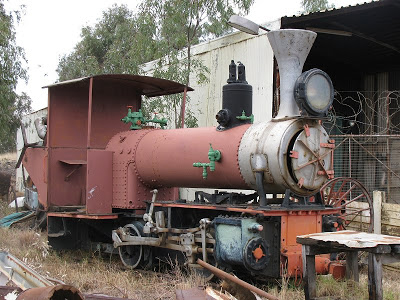 No. 12691 prior to recovery from SANRASM