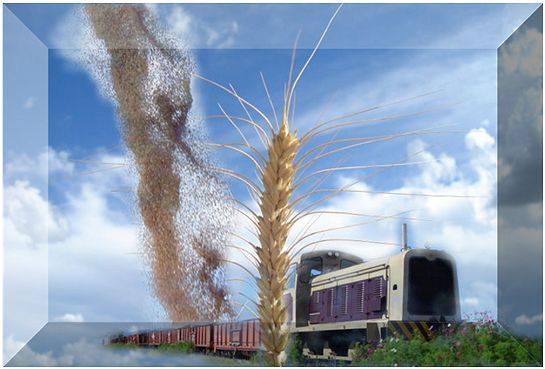 Harvest time on the Sandstone Estates Farms means combining ahead of the clouds. Summer rains are still pouring down making harvesting complicated and sometimes frustrated. Combining started with 7 Combines and because of the rain it was needed to employ 11 Combines to catch up and to harvest at high speed in between the typical afternoon showers in the Eastern Free State to get the crop off the lands. 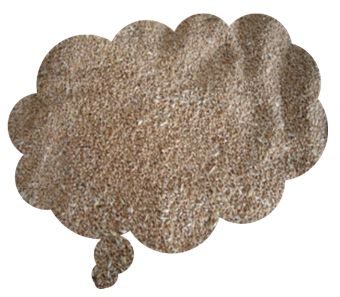 Below: Nine of the eleven Combines running in a line below the majestic Maluti Mountains under a threatening afternoon thunderstorm, each hauling and tipping 5 tons at a time into the Freightliners and Richard Western tailors.

The Silos could bearaly keep up with wheat loads poring in.

Below left: The intake pit runnin24 hours a day to work wheat into the massive Silos near Hoekfontein Station.

Below Right: The dryer plant where the wheat is dried if the moisture levels are above acceptable wheat moist.

Below left: Wheat being tipped out of the Combine.

Below Right: The Freightliner almost ready to go offloading at the Silo's.

9 Combines with 5tons of wheat each waiting in a queue to fill the second Freightliner truck. 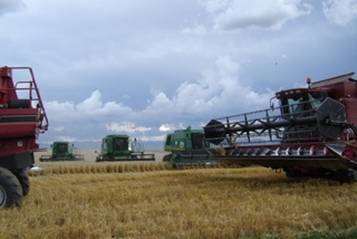 In the meantime the Railway was on standby to assist with hauling the wheat to the Silos at Hoekfontein. It was decided to use the massive Bagnal Diesel Locomotive because of the fire risk using the NGG 16 Garratt Steam Locomotives.

Below left: The Bagnal facing South with a 19 wagon train to assist at the wheat lands nearby the Railway line towards Grootdraai. The Hunslet stood stable in Hoekfontein Station in case double heading were needed.

Below right: The Bagnal waiting for the hungry Combines to empty their stomachs into the B and NG OK wheat wagons.

Below left: The controls of the Bagnal.

Below right: Mr.Mole hanging out of the Bagnal on our way through the wheat lands.

The Bagnall was down at crawling pace running side by side with the Combines. Soon as the Combines were full we stopped and allowed them to empty into the train.

Below left: Catching up with the front Combine.

Below right: The NG OK wagons at the rear end of the train.

With a record of 5 ton a hectare it didn't took long before the Combines were full and could tip into the train wagons.

Below : A B wagon being loaded with golden wheat!

It was time to put the newly restored NG OK wheat wagons to the test. At first we thought the wagons would be too high for the Combines, but they easily reached and tipped into the openings in the roofs of the OK wagons.

Below left: A Combine tipping into the B wagon that can take up to 20tons of wheat.

Below Right: Tipping into the NG OK wagons.

Below right: The first 5 tons of wheat inside the NG OK. Photo taken from above!

Below: More B wagons being loaded!

Below: A perfect day, perfect wheat and a perfect sky!

Below left: The NG OK wagons have 3 openings above the roof to tip the wheat evenly inside the wagons.

Below right: A view through the rear eyes of the Bagnall.

Below: The Bagnall hauling her 19 wagon train with ease towards Grootdraai.

Below left: The Bagnall approaching the Balloon at Grootdraai.

Below right: 19 wagons running into the Balloon.

Below left: The Bagnal on a short photo stop facing north out of Grootdraai, the train was turned around at the Balloon to return to the loading places near the line towards Hoekfontein.

Below right: The Bagnall lifted the 19 wagon train out of Grootdraai and tackled the 1/44 gradient with no sweat.

Below left: Brief photos stop between the Cosmos near the Airstrip towards Hoekfontein Station.

Below right: The Bagnall storming down towards Hoekfontein at 35km/h. 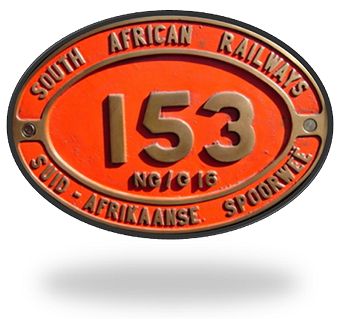 Below left: All the washout plugs were removed to access all the areas within the large boiler of our Class NGG 16 number 153.

Below right: The nozzle in front of the 2 "washout water feed pipe. In this position the water force washes the crown plate and the force is strong enough to reach the smoke box tube plate pumping at a 27000 liter an hour rate.

Below left: The huge centrifugal pump capable of pumping 27000 liters an hour.

Below left: Washing between the nests of tubes at the front tube plate.

Below right; the washout nozzle positioned to wash between the tubes in front of the fire box tube plate.

Below: The washout continues all around the boiler.

All the spark arrestor plates were removed to get access to the washout plugs in the smoke box tube plate.

Below right: The super heater elements and tubes are inspected at the same time.

Below left: One of the cleanest jobs are to get the nozzle into the washout plugs in the front tube plate to was all the scale that was washed down to the barrel back to the water space around the fire box. J

Below right: At last the water spaces all around the inner fire box were washed out working down to the lowest washout hole.

Below left: The clean scale free water escaping through the lowest plug.

Below right: The washout hole closest to the fire box door.

Below: The second last washout hole being washed to ensure a clean water space between the inner and outer fire box. 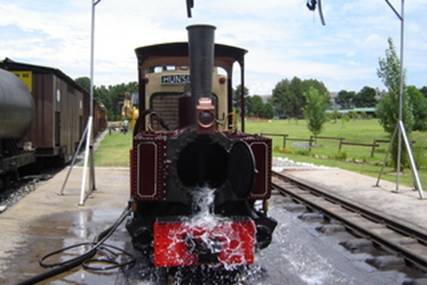 The little Decauville was shunted out to the washout bay in front of the shed. The smaller locomotives are more easy to wash out because they have less washout plugs and the 27000 liters a hour force cleans the boilers out with ease.

Below left: The water escaping the lowest washout hole.

Below right: The only two top washout plugs were removed together with the 4 around the water space.

Below left: The smoke box being cleaned.

Below right: The washout nozzle in position at the washout holes above the crown plate.

Below: A clean Boiler!!! 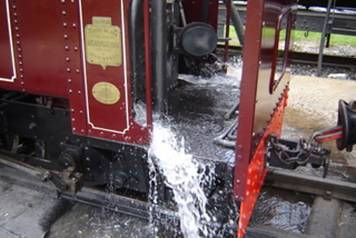 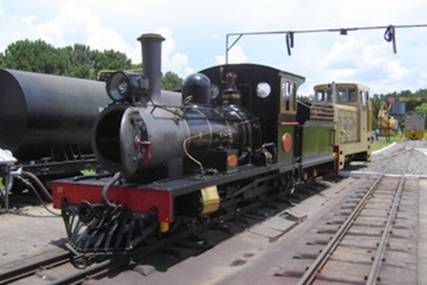 Little Jimmy was the last boiler we washed out this week. The smoke box was cleaned and all the tubes were cleaned with a tube cleaner to ensure happy warm free steaming hours again.

Below Left: All the washout plugs were removed as well as the two mud hole covers to reach all the areas within the boiler.

Below right: The scale and mud being washed out of the Boiler.

Below: The chemicals we use dissolves the scale into sludge, note the loose scale and sludge pouring out of the Boiler. 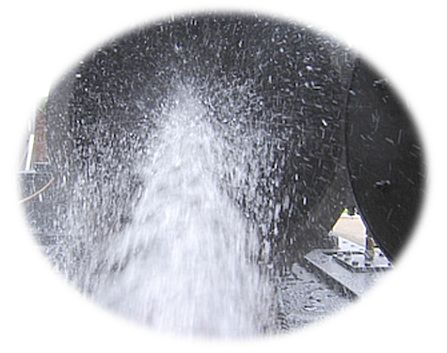 Below left: The washout plugs in the smoke box were removed to wash the scale down the boiler to the washout holes around the fire box.

Below right: The 2" nozzle through the mud hole washing down the crown plate and in between the nest of flame pipes in front of the fire box tube plate. 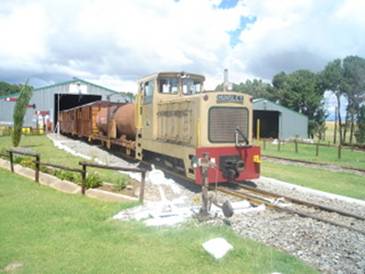 This week we shunted all the passenger and Ratanga coaches to the inspection pit for brake adjustments and leak off tests. In total 9 wagons were roadworthy this week.

Below left: Our 2 PE coaches on the Inspection pit for under frame Inspection and brake adjustment.

Below right: A cattle wagon and a Ratanga wagon on the pit for brake adjustment.

The Cattle wagon failed the leak off test and the problem was found to be a defective release valve. The release valve was replaced and the wagon rolled out ready and roadworthy.

Below left and right: The old and the new release valve.

Below left: A composite brake block on one of the Ratanga coaches. These brake blocks have much better brake efficiency than the old cast iron brake blocks.

Below right: The Hunslet hard at work shunting Ratanga coaches to the Inspection pit. 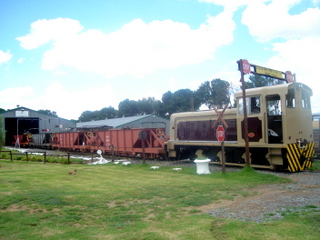 Below Left: The Ay being lifted from its bogeys for under frame restoration.

Beaconsfield, home of the most modern and largest non articulated Steam Locomotives ever used in South Africa, today all is left is the memories and photos of a long gone Steam era. The massive class 25NC locomotives ruled the Kimberley shunting yards as well as the mainlines between Kimberley and Bloemfontein as well as Kimberley De Aar.

Below left: Beaconsfield Steam shed in the last of the good steam years in 1992.

Below right: Double heading class 25 NC's storming past the intermediate home signal on the last climb towards Petrusburg heading towards Bloemfontein with the 15:15 goods August 1988.

Below left: A single class 25NC storming through Petrusburg on the lats stretch home for this 25NC.

Below right: Class 25NC number 3469 on the daily pickup train from Kimberley.

OUTLOOK FOR NEXT WEEK!!!