Restoration of the Eland 60

Restoration of the Eland 60

The Military Vehicle collection of the Sandstone Heritage Trust has for some years included an example of the Eland Armoured Car fitted with the (de-activated) 90mm DEFA Gun. These Cars were always used in conjunction with ones fitted with a 60mm breech-loading Mortar; two of each in every troop.

The Sandstone Collection was fortunate to acquire a 60mm recently, in derelict condition. 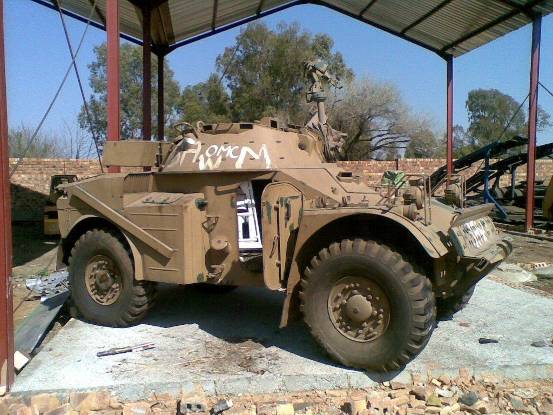 The hulls are identical, and were based on the Panhard AML 245 of the French Army. The crew consists of a Commander, Gunner and Driver. In full Operational Order, the 90mm carries 20 rounds for the main armament, High Explosive and High Explosive Anti-Tank: 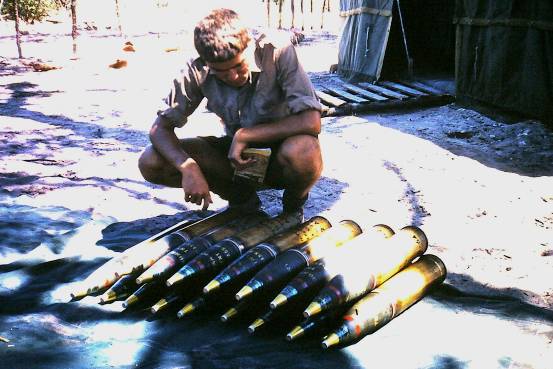 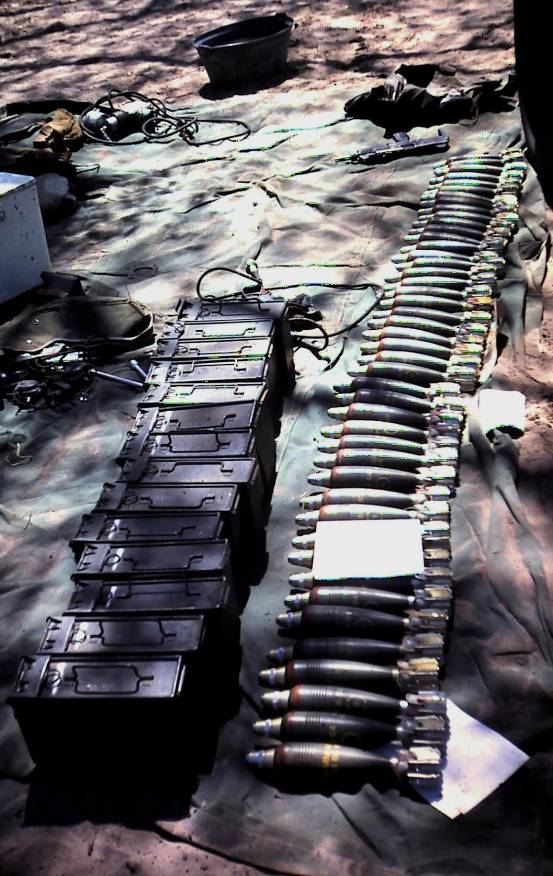 .... as well as 2800 rounds of 7.62mm for the Browning Machine guns, which are fitted coaxially to the main armament. An extra Browning is fitted on the 90mm for anti-aircraft use: 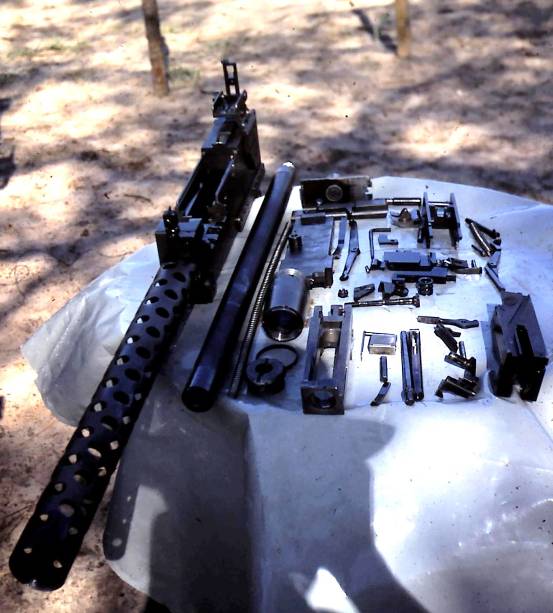 Below is a picture of a full troop in Operational Order at M'pacha in 1969, keeping a watchful eye over a Harvard. 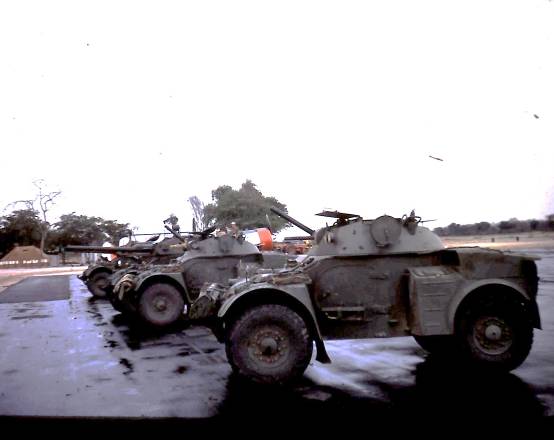 The 60mm mortar is particularly useful as an area weapon and it worked well in the Bush War.

The Sandstone 60mm is now with veteran Military Vehicle Restorer Jan Fouché, and he is working from the bottom up. He has removed the turret, probably under safer circumstances than these shown below, taken at Katima Molilo in 1969, where the much heavier 90mm turret has been removed with a chain block hanging from a branch of a tree! 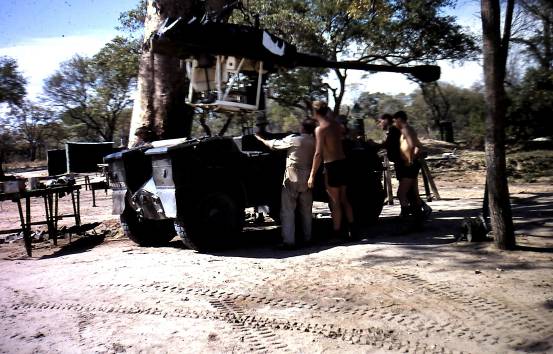 It can be seen that the turret includes the basket of the fighting comparment, all of which revolves with the gunner, crew-commander, ammunition and radios. 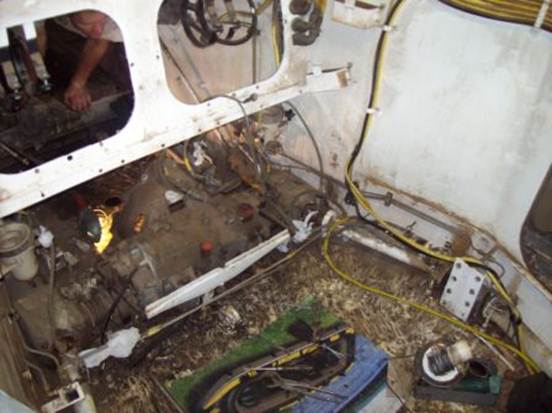 In the above picture the turret has been removed as well as the panels which separate the fighting from the engine compartments. The gearbox can be seen under the partition, with shafts outwards to each side where they split, one to the front, one to the rear on each side. The drive shafts follow the shape of the outside of the hull and have extra universal joints at the widest part of the hull. Below is the fuel tank.

Jan has also removed the engine, a Chev 2.5 litre 4-cylinder petrol engine which is strong enough to propel this Armoured Car at low speeds in the bush as well as at a tidy speed on the road! These engines replaced a flat opposed 4-cylinder petrol engine in the original imported and the first of the locally-produced models. The electric clutch, operated by gripping the gear change knob, has been replaced with a more conventional hydraulic system. 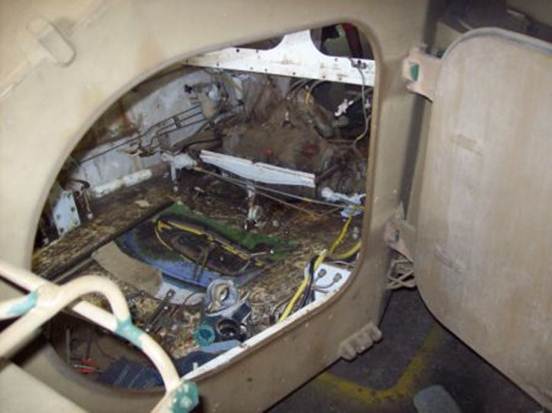 The open left hand hull door gives access for all the crew, but each member can also enter and exit through a hatch above him. The size of the gearbox can be seen in this photo! 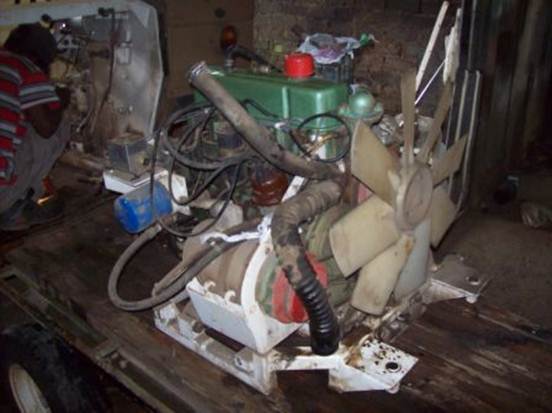 The engine has been removed on its sub-frame, along with the massive alternator, needed for the radios, particularly! The fan is also large and blows air from the engine, outwards through the radiator. 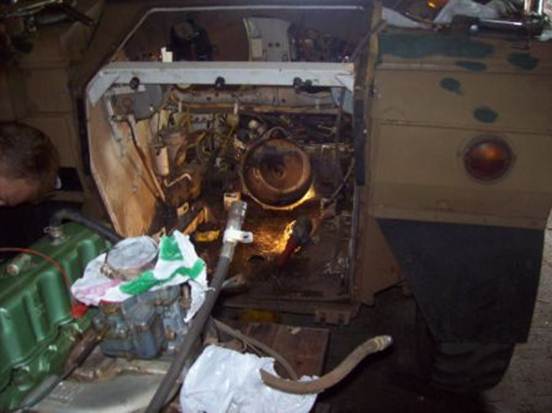 The engine compartment looks roomy, but with the engine back in place, it's not easy to even find the dip-stick! The rear panel is much taller than the early models, if one compares the picture above with this one below, showing a soft-skinned vehicle tyre being pumped with the compressor connected to the Power Take Off. Also taken at M'pacha in 1969. 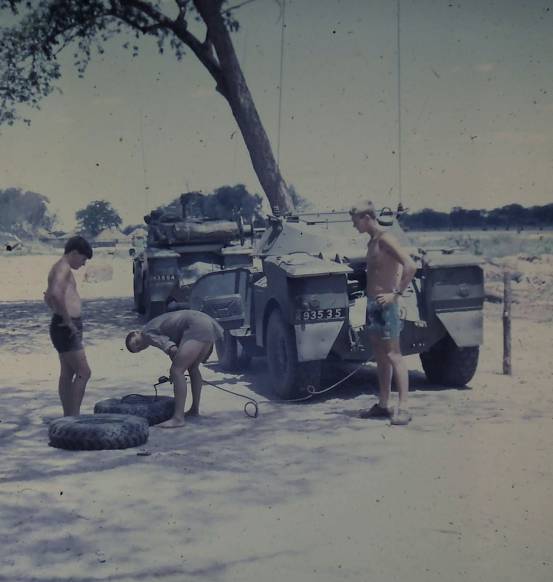 Jan has a long list of spares on his shopping list; all of the hydraulic equipment for the brakes and clutch either needs replacing or reconditioning. All the flexible hoses are perished and seals are needed on the transmission.

We look forward to reporting on his progress!

155’s boiler is completed at Wonder Steam and loaded for the return to Sandstone.

The rebuilt boiler of NGG16A 155 has now been loaded at Wonder Steam in Pretoria for return to Sandstone. This was done  with an official permit as railway maintenance departments were declared as essential services by the Minister on the 4th of May 2020 meaning we could obtain a permit to collect the boiler as it is part of maintenance. This also means that we can now continue with the restoration at Sandstone.

The attached photo shows 155 being loaded and the PDF, a copy of the Government Gazette relating to Railway Maintenance. - Read more here

Sandstone and Geoff Cooke working together in the future.

As winter closes in its all hands on deck before the heavy frosts arrive. Click here to view the full Gallery

Lockdown Gallery - A mountain view and some new arrivals