Keith Wetmore has been negotiating for the last two weeks with the Department of the Environment and SANCCOB (The South African Foundation for the Conservation of Coastal Birds) in connection with the removal of the Cormorants on the vessel. He has applied for a permit and it has been granted. It is valid from 3rd to 15th December, so we have to get moving! SANCCOB are the only people authorised to remove the birds and they have been given more than the required one week’s notice, so the plan is to move in and clean the vessel at the same time on Wednesday next week, 8th December. 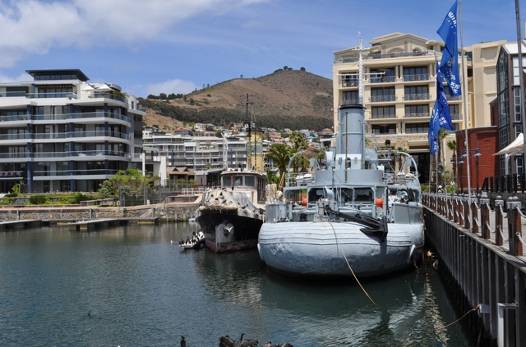 There are some conditions, though. We must take steps to prevent the birds returning, we apparently have to pay SANCCOB to remove and rear the chicks, and we may not remove nests with eggs! 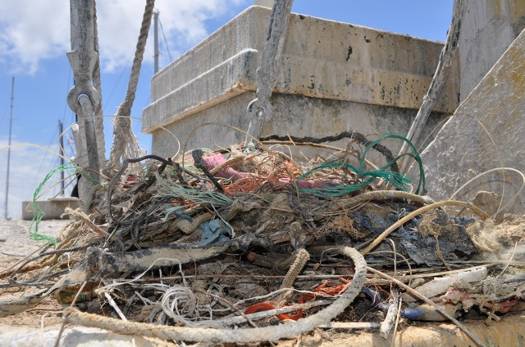 We have collected considerable lengths of shade cloth to cover the boat and plan to have a pressure cleaner there at the same time to blast off the accumulated guano, which makes the vessel stink. 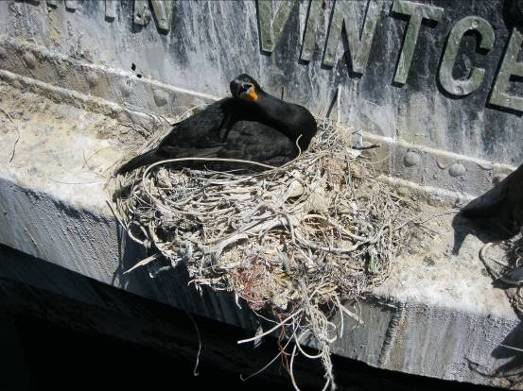 Members present were Keith Wetmore, Hermann Geldenhuys and Andy Selfe (with visitor Allan Carson) to start with; we were joined later by Chairman Eniel Viljoen, Barries Barnard, Francois Erasmus (Jnr) and his wife and children. 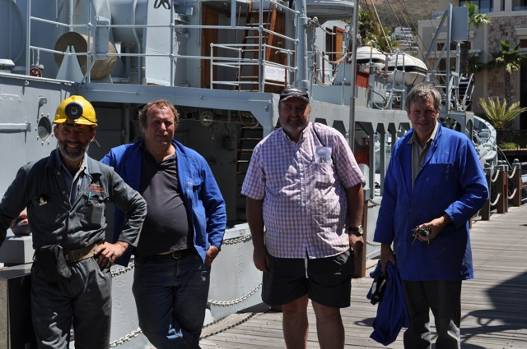 We inspected the vessel carefully, and found nothing different from our first visit several months ago, except much more guano all over the vessel and the eggs which were being sat upon are now chicks, almost adult size. I found the brass handles I’d tucked away behind the Captain’s accommodation and we took them away. Somebody had previously planned to take them for scrap.

We measured for power cables (30m) and water connections and hose length (25m). 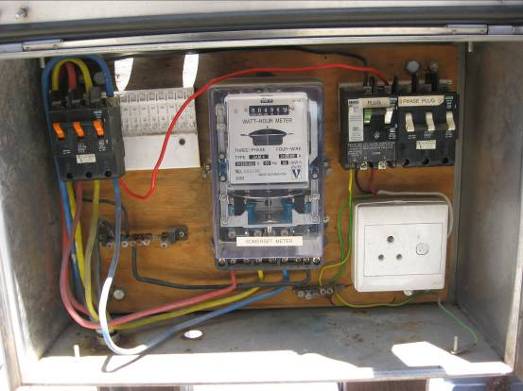 We have also measured for a rope (60m) to pull taut all around the vessel onto which we can attach the shade netting, outside of the gunwales. We plan also to cover up the fairleads through which the hawsers pass with galvanised sheets 300mm square (10 off).

We inspected carefully where we plan to cut the superstructure off. One possibility would be to cut off the heads of probably thousands of rivets and to drive them out, which would not be easy. On the balance, Eniel suggests cutting with a plasma cutter directly above the line of rivets, and to weld it back on. Pipes will have to be disconnected (it’s surprising how many have a flange at the right height!), or removed completely after marking their positions and purpose carefully. 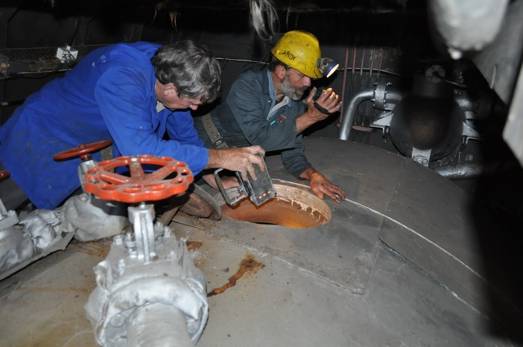 The other very important conclusion which was arrived at was that the best place to reassemble the vessel is at his workshop at the southern end of Villiersdorp. This will give us more time to make the vessel presentable as an exhibit and to prepare the ground for its eventual resting place, before ‘making a plan’ to get it from one end of town to the other.

It looks as though Jonannes is correct that if we need to bring the vessel to our projected total height of 4.3 metres for transport, that the boiler will have to be lifted out. The crown of the boiler which we are lying on in the picture above is significantly higher than our projected cut line. This might not be a bad thing after all, as when Keith was interviewing past Chief Engineer, Ron Etter in Knysna recently, he said he’d had to do a lot of work on the boiler supports. 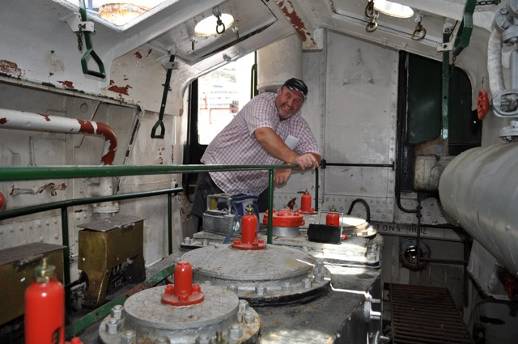 It was interesting, on our way for a bite to eat, to pass a state-of-the-art tug in the Robinson Dry Dock, having welding done to its Voith-Schneider ‘egg-whisk’. 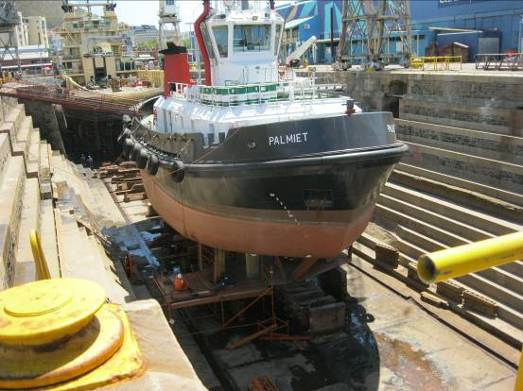 The Dock must have been built more than 100 years ago; it was not new when this photo was taken in 1936: 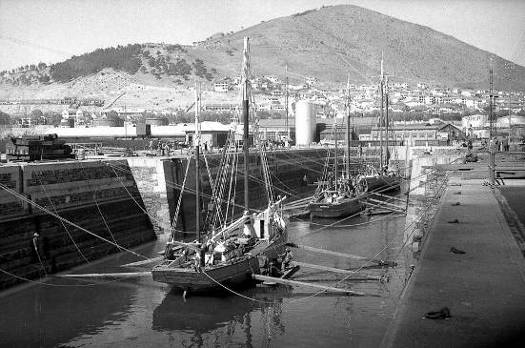 And Allan just had to pose amongst the Great Men of our transition to a Democracy! 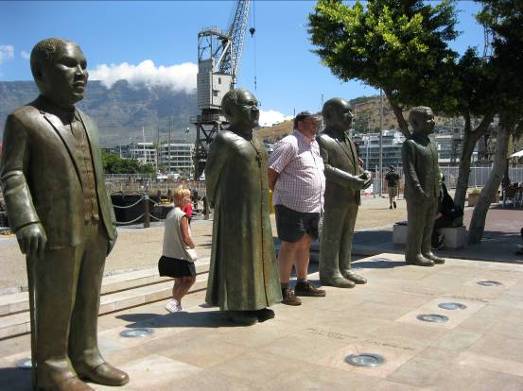 Now we have to see who can take the day off this coming Wednesday, what vehicles to bring and what to bring along and perhaps what to take away for safe keeping.

We also inspected the area we have been allocated for the vessel to stand, if the stripping cannot be completed on the water. Johannes Uys of MME, who will be supplying the lifting component of the exercise, either the whole vessel or the parts, would prefer that all the stripping be done on the water so that, from the Synchrolift cradle, there would be one lift only, onto ALE’s trailer and away! Any time spent in this yard would be a huge responsibility with respect to security from scrap theft. 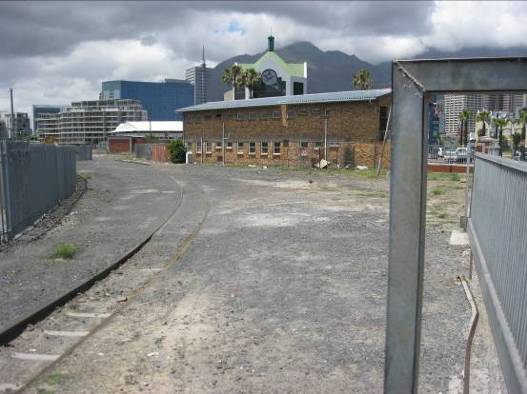 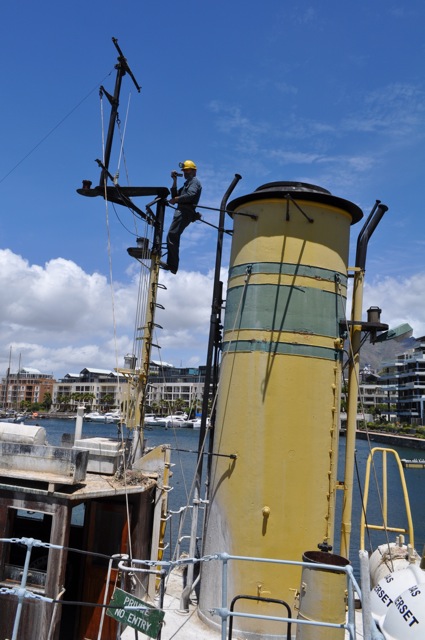