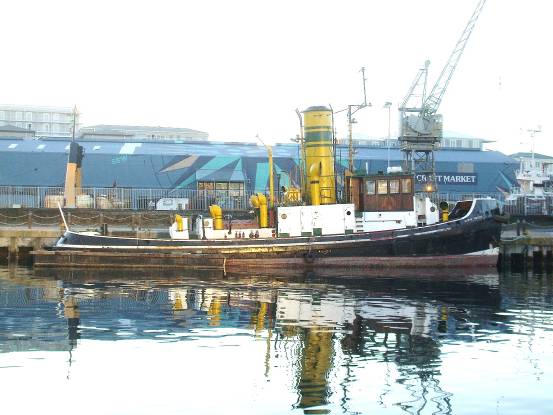 Can we stand back and watch this magnificent vessel being cut up for scrap? Today (26th August 2010) we had a meeting on board. Present were the Port Captain, Steven Bentley, Dylan Knott who project-managed the recent cosmetic restoration, Keith Wetmore of Somerset Timbers, who happened to notice the appeal on the Sandstone Heritage Trust website, Tim Delport, also of Somerset Timbers for technical support, Arthur Wilding, well-known steam preservationist, Johannes Uys of Machine Moving & Engineering (MME), Eugene from ALE Heavylift, Malcolm Wetmore of Somerset Timbers and myself, representing Villiersdorp Branch of the West Cape Tractor & Engine club, as well as Steam in Action.

The Port Captain is under pressure from the owners of the V&A Waterfront to get rid of the vessel. It had been bought by an Australian businessman, who has since suffered ill health, and the scrap man just needs one signature to proceed with cutting! He is very sympathetic to the possibility if the vessel being saved in some form and promised to remove many hurdles in that path. He however stated that the V&A had no space to display the vessel in future, either on the water, or on land.

It is well worth reading the recollections of Cedric Hunter on http://alwynvincent.wetpaint.com/page/Cedric%27s+Story Some quotes from it:

“The classic marine steam engine’s enormous torque (turning power) and direct reversibility enabled it to be directly coupled (i.e. without intervention of any gears) to the shaft of a big efficient propeller – in the Vintcent’s case of 2.1m diameter. The A.V. and her sisters were therefore endowed with powerful and rapid maneuvering ability, enough to rouse the envy of the crew of any present day single-screwed diesel tug.”

Describing the run-up to the Steam Test and sea trials:

“After a few weekends (+ some week days) of intensive making ready, including of course the charging of the Vintcent’s bunkers with several tons of coal (about 25% of full capacity) and filling her reserve feed water tank, we started up the boiler fires at about 4pm one Saturday. It was strict practice when heating the Scotch boiler from cold, to do so very slowly, over at least fifteen hours to working pressure. Richard and Tim with much sound advice, took turns through the night at tending the fires in both furnaces, until a couple of us took over from them early the following morning, freeing them for a breakfast break. Garnet arrived later, as the most watched gauge was already telling of rising steam pressure. Hamish Matheson also joined our below-decks team on that momentous morning. As a professional ship surveyor, he was certainly an important member of our committee, but of consequence to us on-board workers then, was his background as a marine steam engineer, and that in his quiet way, he had very often toiled alongside us before. 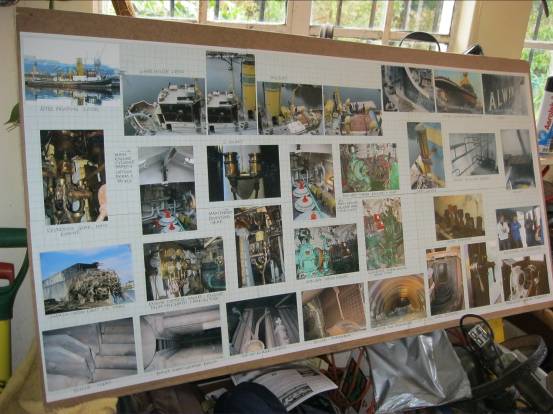 “There were about eight of us below, most moving between attending to something in the engine-room (oil can in hand), and helping in the boiler room, when a furnace door was opened to allow the blazing coal bed within to be raked, and then added to with shovel loads of fresh coal. Palpable all-round excitement mounted with the rising steam pressure; until Garnet finally ordered the “cracking” open of all the boiler’s steam supply valves and its feed water inlet valves.

"Test starting of the steam auxiliaries then followed, beginning with the condenser’s circulating pump and the reserve feed water pump. This latter was of the non-rotative type as was our G.S. pump which we later put to pumping out the tug’s bilges. Starting any of our three rotative auxiliary engines had to be aided (after opening its throttle valve) by turning its single crank off centre for the steam to take over, by which instant it was of course vital to have withdrawn the turning-bar from its notch on that engine’s heavy flywheel.

"The most awaited moment that morning, was heralded by Garnet’s opening of the main engine’s big stop valve. In silence and with bated breath, we watched as he then edged open the throttle and rocked the bypass lever. Fully visible on such steam engines, the big cranks, rods, crossheads, eccentrics and quadrants, all started to move together, to everyone’s great delight. But the motion was abruptly arrested by Garnet’s handling of the ahead/astern control, forcing the cranks to reverse their turning. This procedure, coupled with the frequent opening of the noisy cylinder drains, was repeated a number of times for the required warming through of the engine, after which Garnet set it to continue turning in the dead-slow ahead mode. The propeller was turning at about 30rpm, causing both our mooring lines to take gentle strain, and those of our fellow museum ship S.A.S. Somerset, alongside which the A.V. had been moored for some months. While some of us were still watching the mechanical motion, a few wonderfully stentorian blasts, way above us, signalled to all Cape Town that our tug’s steam whistle was in fine working order. And so too were found to be the stern steering gear and anchor’s windless, that morning……."

The sea trails were successful, and the tug did take tours around, but, later in Cedric’s story, he relates:

"Not long after our docking, I was alone aboard, dismayed by the stokers having left fires far too ample for when no more steam is needed. Its rising pressure, halted briefly by my use of the reserve feed pump, compelled me finally to rake out the fires, dousing down (with piped sea water) the loads of burning coals as they piled up on the floor plates, spewing plumes of sulphurous ash and steam.

As the A.V. has never again moved under steam power in fifteen years since then (my writing now in 2009), and was the last South African-based ship (as opposed to launch) to do so, through my actions aboard that evening, I unknowingly gained the poignant distinction of being the one to have physically closed down the era of South African maritime steam – dating right back to the 1830’s. This is assuming of course, that none of our four remaining steam ships afloat, three being museum ships, is ever to steam again, highly unlikely given all it took to get the A.V. to do so, being the smallest of them by far."

This is what she looked like when the team with Dylan and Charlie Roux had finished with her, just two years ago, on behalf of the Australian owner: 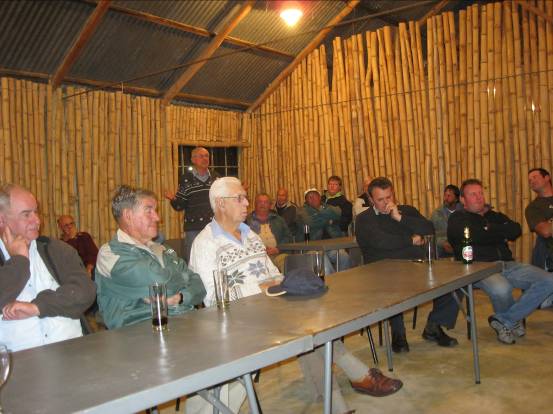 Here are some photos of her present condition. 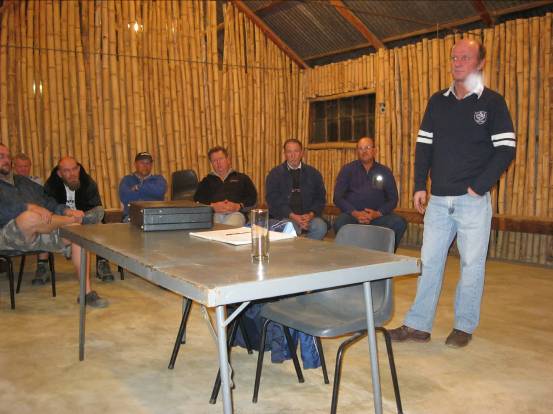 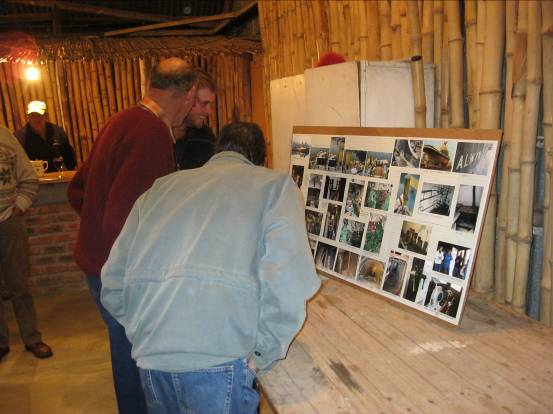 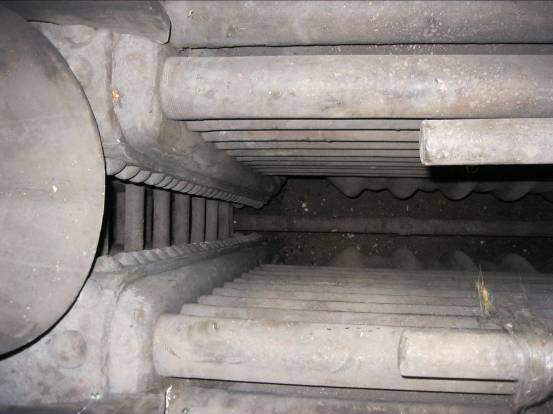 View down into the bolier showing the twin fireboxes on the left. 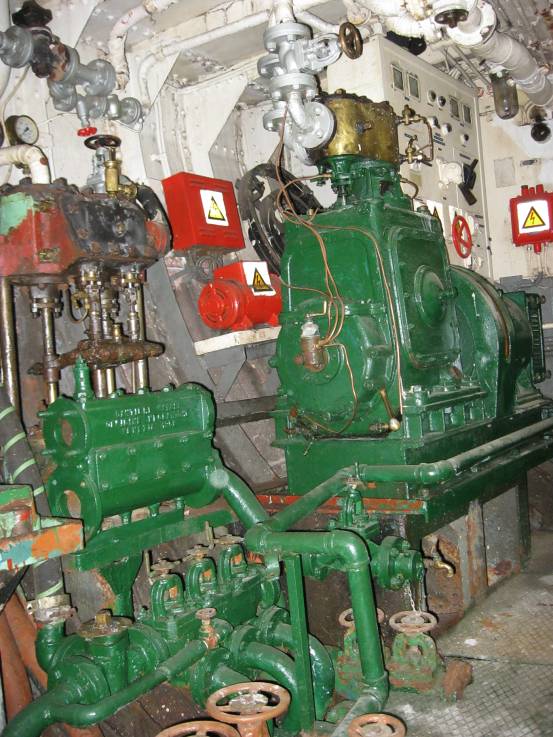 Steam engine driven generator on the right with switchgear behind it, and a duplex steam pump on the left. 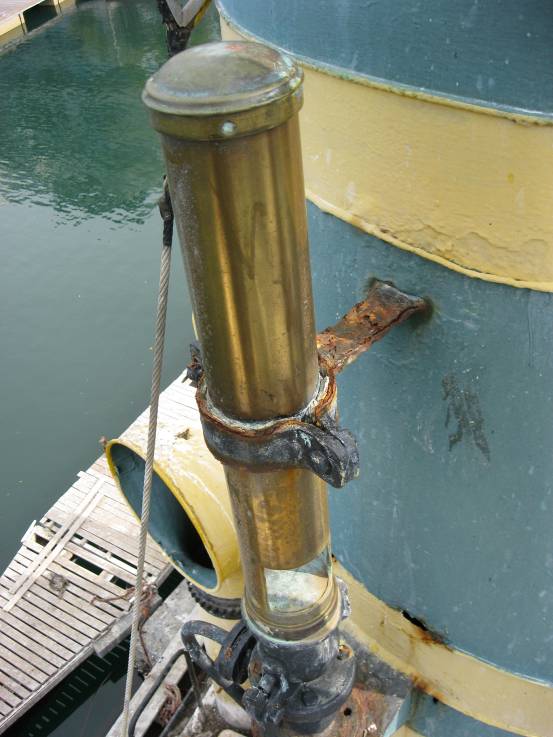 Steam whistle viewed from the mast. 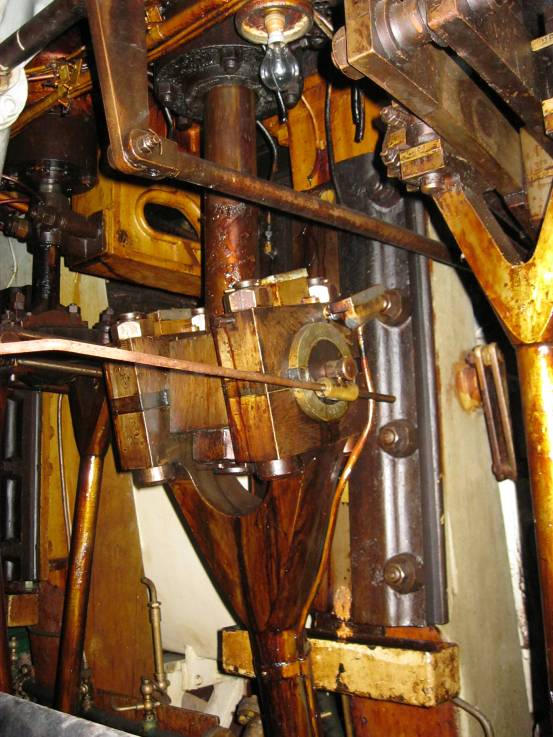 The Small End of a connecting rod of the Main Engine 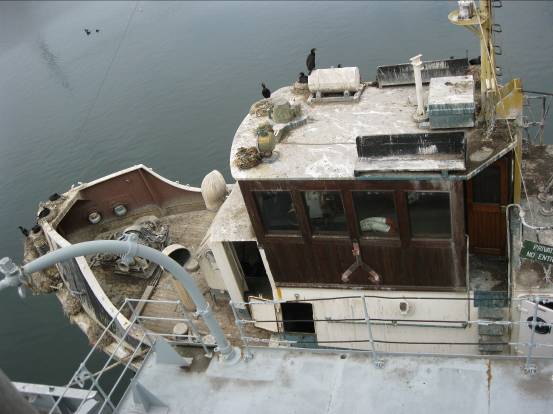 Looking down at the wheelhouse from the funnel of the SAS Somerset tied up alongside. 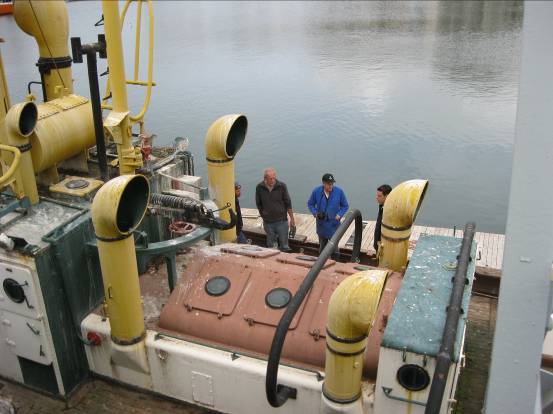 Engine room hatches and galley on the left, while the vessel’s future is discussed. 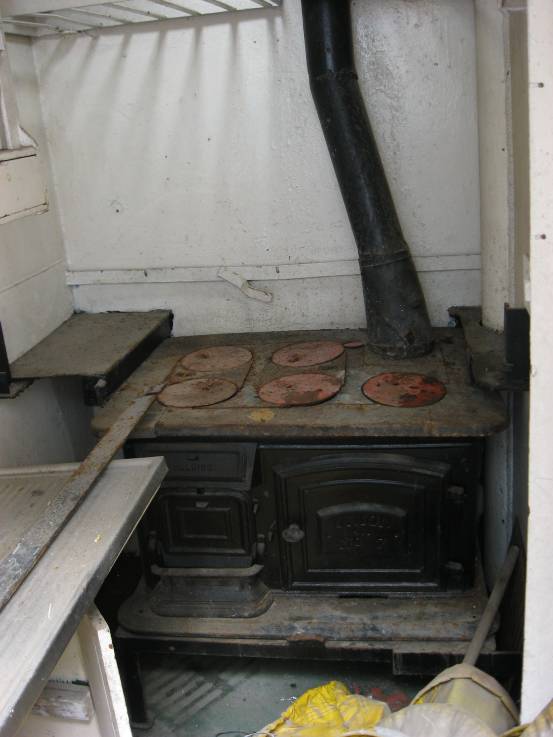 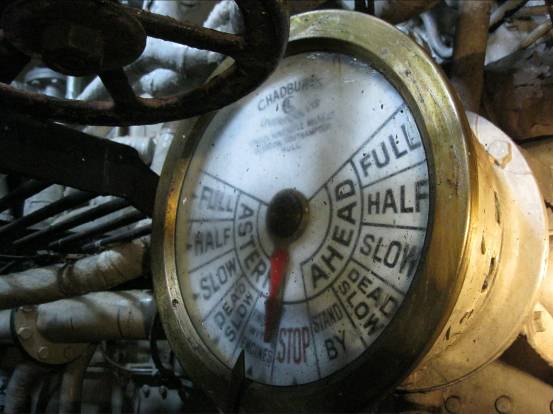 Engine Room Telegraph, showing ‘Finished with Engines’. Corresponding with the same setting in the wheelhouse! 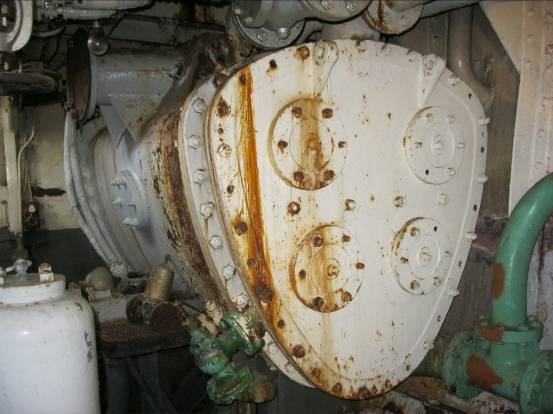 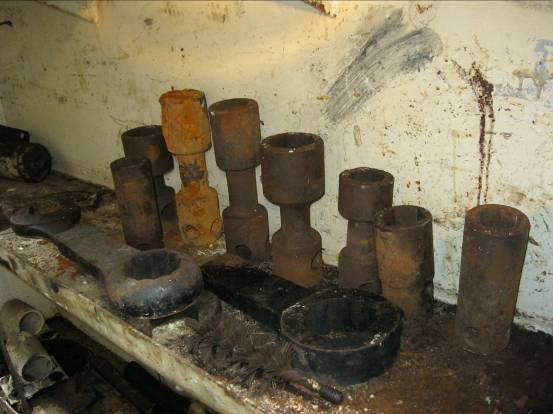 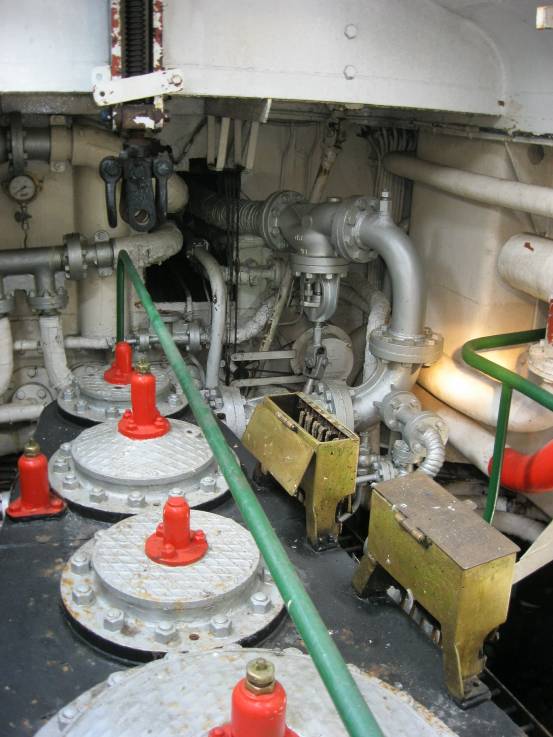 A view along the cylinder heads of the Main Engine, with the main steam feed valve on the far side. 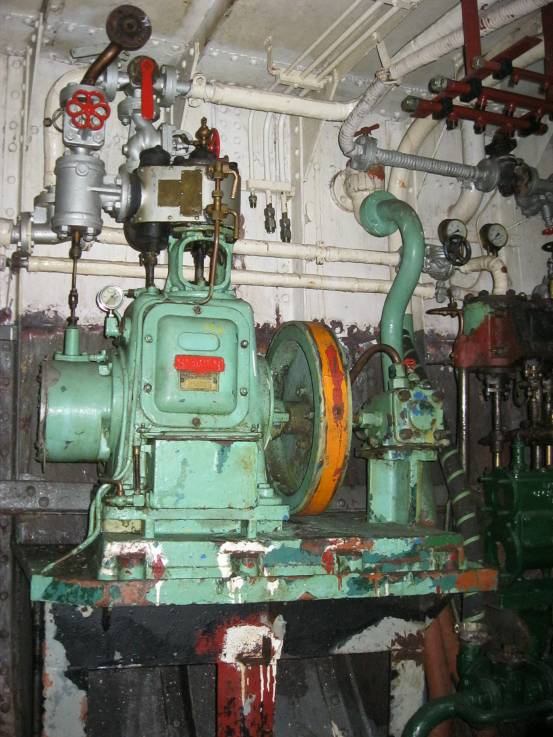 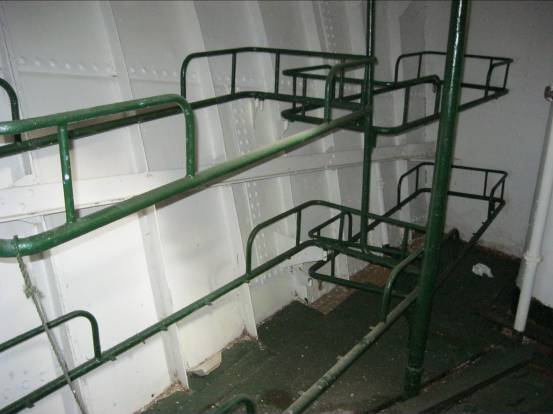 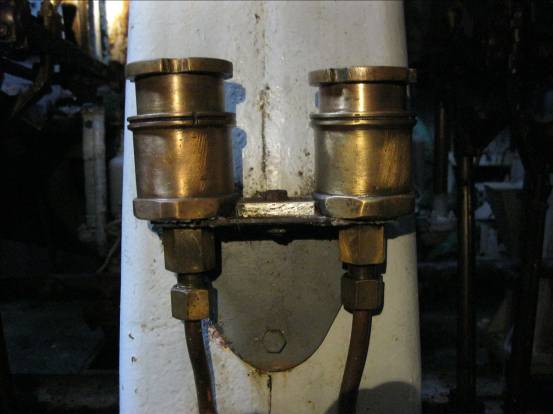 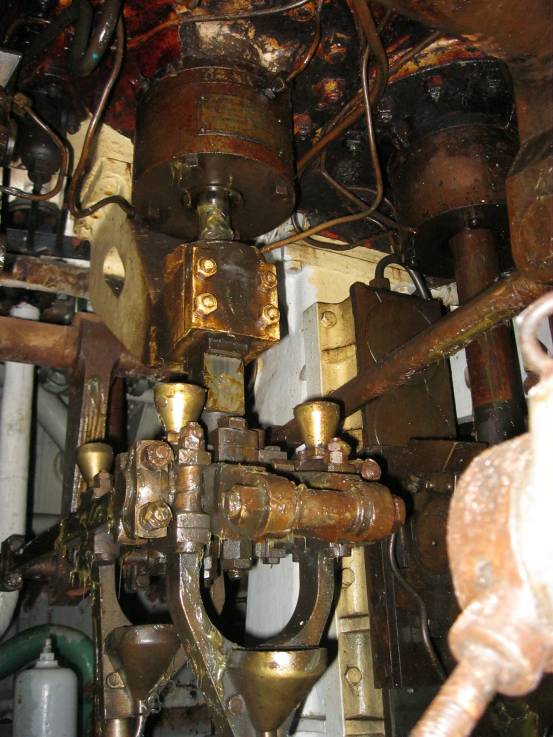 Reversing gear of one of the cylinders of the triple-expansion steam Main Engine. 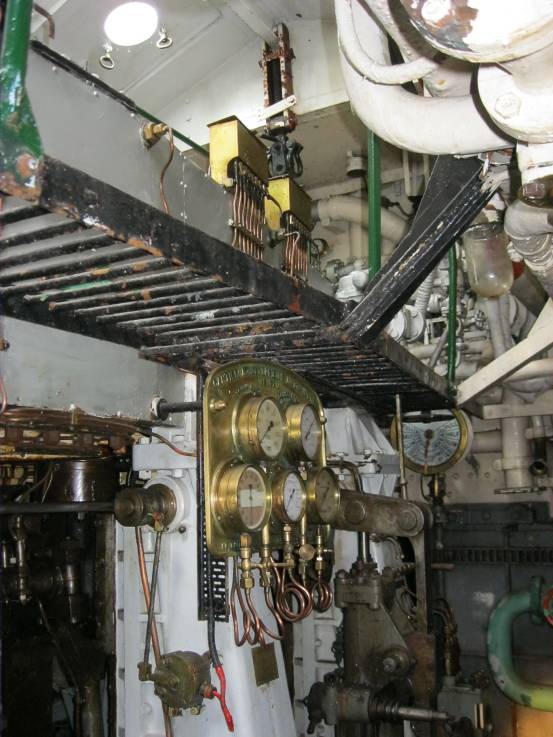 This is where the engineer would stand, in front of the gauges and the engine room telegraph, reversing gear and main steam regulator. Above are the multiple wick oilers.

Here are notes of the meeting drawn up by Keith Wetmore:

ON BOARD STEAM TUG ALWYN VINTCENT

-          Working with owner (in Australia) to allow clear title to be obtained by the group proceeding with the preservation.

-          Drawing up a legal document to cover the transfer of ownership, conditions of working in harbour, safety aspects, insurance etc.  This must be with an entity who can enter such an agreement.

After discussion, it was concluded that the costs and other difficulties of getting the vessel back into steaming and seaworthy condition were beyond reach of any likely organization. (Est of R4 million to effect all repairs, and thence running costs and crew costs).

(at this stage Capt Bentley left the meeting)

3.1   Remove the vessel from the harbour to a site on the hard (V and A site?) and remove all superstructure, engines and equipment and re-install it on a suitable site for eventual public display (e.g. a museum, or commercial public viewing site).  The shell hull could then be sold for scrap (guess 60 tonnes at R1500 per tonne)

This implies an interest from a private or commercial organization with a big budget,    even with major volunteerism. Captain Bentley stated before he left that the V&A had no plans for the vessel on their property in the future in any form.

3.2  Remove the vessel as a complete unit to Villiersdorp, and install it there complete for eventual restoration by the Villiersdorp branch of the WP Tractor and Engine club.

This would entail the following steps –

Considerable ‘buy-in’ from the club members for this will be required, but the eventual aim should be full restoration and to run the steam engines and all equipment using the vessel’s own boiler.

The directors of the Villiersdorp Co-op have been contacted during the meeting and have expressed full enthusiasm for the project.

Johannes Uys of MME has stated his full support with the lifting and unloading of the tug.

Eugene of ALE Heavylift estimates that the transport of the 110 tonne load including all escort, clearance, permit and insurances will be approximately R500 000.

Please contact the Webmaster if you can assist in any way. Offers of volunteer help have already come in from Dylan’s locomotive preservation crew at Monument Station, the Villiersdorp Branch of the West Cape Tractor & Engine Club, from Conrad Hicks and his group of Blacksmiths, and from Steven Bentley, the Port Captain himself to name but a few!

I repeat my question at the beginning: Can we stand back and watch this magnificent vessel being cut up for scrap?