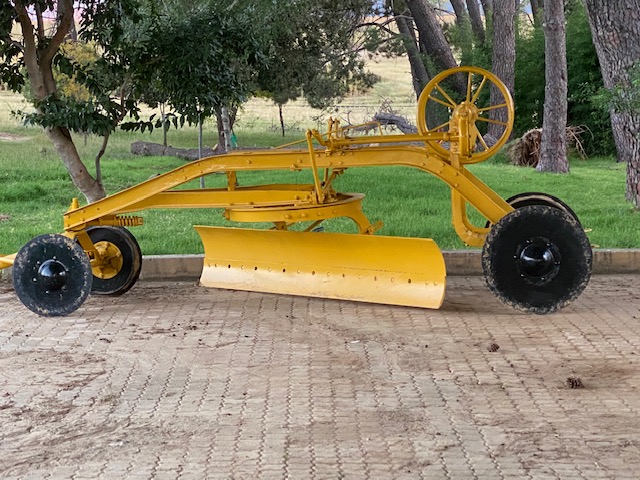 There are times when acquisitions at Sandstone are sometimes a mystery and we are not always sure what we have got! Recently we acquired this interesting little scraper/drawn grader but were not sure of its history. Crushed into the paint work was a Caterpillar sticker which was a major clue. With assistance from Neil Clydsdale (who visited us at Stars of Sandstone 2019) of the Australian Caterpillar Club, it was identified as a Caterpillar No 1 Terracer with optional front truck and was manufactured sometime between 1931 and 1941.

Caterpillar provide a brief history of this implement on their website which was also supplied without a front truck and today is available as a 1:16 model from Caterpillar for $129-99.

The No. 1 Terracer was introduced in 1931 to help farmers add terraces to their fields. Terracing, a conservation practice used to help reduce soil erosion, became much more common during this time as farmers tried to combat the “Dust Bowl” conditions prevalent during the Great Depression era. Production of the No. 1 Terracer lasted until 1941, making it the most popular and longest running part of a line of Caterpillar® agriculture implements, which included a hay mower, hay rake, and multiple-implement hitch. The gooseneck hitch, coupled directly to the tractor drawbar, made the Terracer more manoeuvrable than traditional pull graders. The No. 1 excelled at filling gullies, clearing fence rows and building irrigation ditches, in addition to terracing. The 1400 lb. weight and 8’ wide blade of the No. 1 made it well suited for Caterpillar Ten, Fifteen, Twenty, Twenty-Two, Twenty-Five, R2 and D2 tractors, as well as tractors of other makes between 10 and 25 drawbar horsepower.