The purpose of today’s trip to Swellendam was to inspect a Lister Blackstone-powered generator which is set up as a stand-by plant at a sawmill on Grootvadersbos beyond Buffeljags River and Zuurbraak, quite a distance inland, on the way to Heidelberg. Ronnie Crowther and I had arranged to have the engine started for us by Nick Selley and to meet the owner, Alex Anderson. In case you think the name is in Khoisan, think again! It’s an acronym for all the first names in Alex’s family! 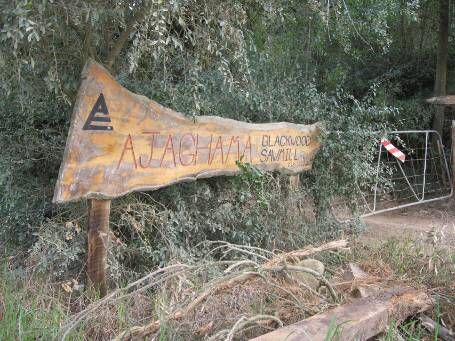 The engine is in running condition and we hope that if it becomes available for preservation, Alex will join us in the Villiersdorp Club, and we can help him bring it to our Museum and set it up there as an interesting exhibit and stand-by plant at the same time, but that, like our arrangement with everything else in the museum, it would remain his property: 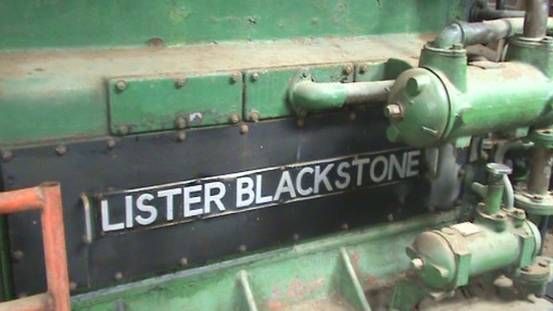 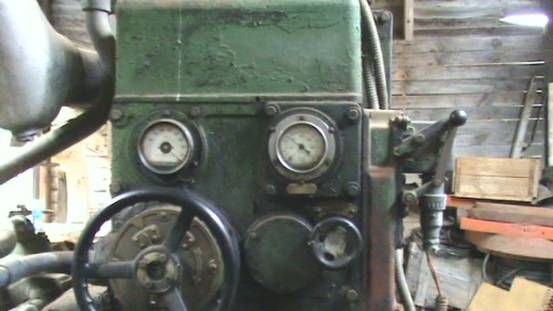 A view of our museum: 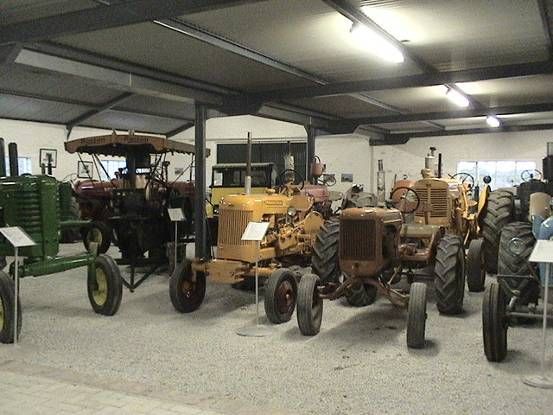 And one of the Crossley engine we saved from Standard Roller Mills and restored and installed as a Club Project: 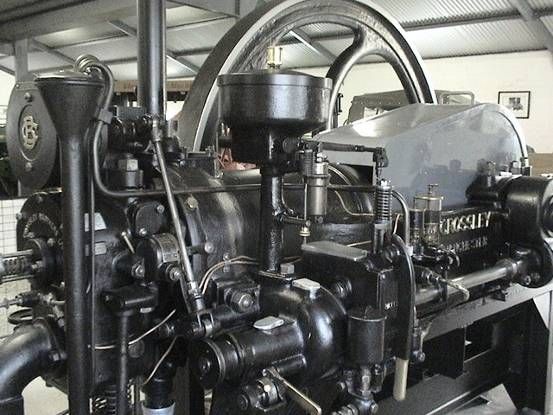 Ronnie had then arranged for us to have lunch at Rheenendal Museum, about 5km out of Swellendam. It’s run as a restaurant by the late Raoul Beaumont’s brother Roger and his wife Jean. We know them well from the time they farmed here in Elgin. Before I forget to mention it, we had a delicious meal there, and lots of it…. No coming away from there hungry! 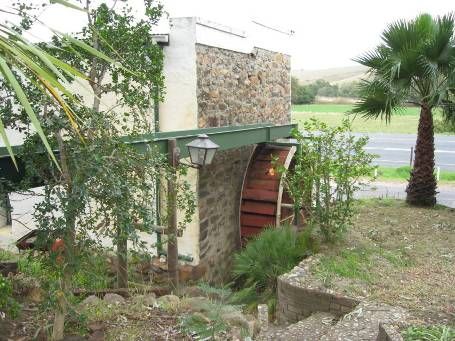 Viewed from behind the wheel looking towards the service road and the main road beyond, it’s very noticeable to passing traffic! The wheel is intact, but needs attention, in the form of new buckets. These are so similar to those I made for Compagnes Drift what I have brought a sample home to see if I can use my patent press tool to make them also! The wheel is a later addition; Roger has photographs on the back of the menu of a larger wooden wheel. There are holes in the wall showing where the launder supports would have been. The launder is made of lipped pressed steel channel, about 25 metres long, reaching back to the ‘leiwater’, an irrigation channel on the local distribution network. There is a sluice at the top to allow the water past in the cement furrow to the right, otherwise all water comes over the launder: 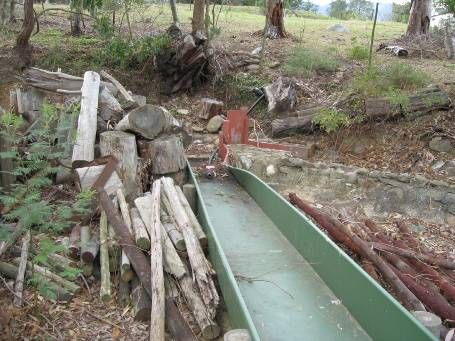 Inside is interesting! The pit wheel is cast iron and bevelled. Driven by that is a bevelled pinion on a horizontal shaft, held in bearings. Next to the pinion on the shaft is a large spur gear, without a job and beyond that a flat belt pulley:

In line with the pulley is another on a line shaft under the stairs going up to the stones floor. The Mill itself is a ‘Portable’, supported on a heavy steel angle framework. I need to explain the word ‘Portable’ here, as people often ask. A mill mechanism which is built-in to the fabric of the building, standing on ‘hurstings’ or heavy wooden beams and integral with the building, is called a ‘Vitruvian’ mill. Vitruvius didn’t invent the mechanism; he described and drew it in one of the 14 books he wrote on architecture about 70BC. The books have survived and 1400 years were to pass before any other treatise on architecture can be traced! He described a water wheel on an axle connected to a pit wheel, driving a pinion, in turn driving a runner stone over a bed-stone. He has been getting the the credit for the design ever since! He was later to achieve fame when da Vinci drew him in the ‘altogether’, framed in a square and a circle, but he was long dead by then! In contrast, a Portable mill comes as a complete kit of parts to be assembled like Meccano, is free standing, and can be driven by any power source; tractor, stationary engine, electric motor or water wheel as in this case, normally through a flat belt pulley. Our Gutmann of 1916 and the earlier Stamford are examples of this type. The name has nothing to do with being able to carry it! James Walton wrote a small book on the subject. 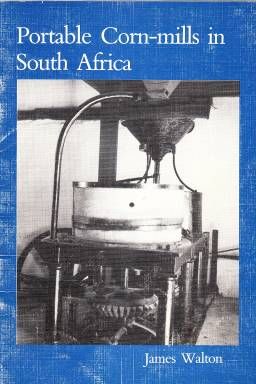 The cast-iron legs, bevel gears and tentering mechanism can be seen in the picture below, along with the long vertical meal-spout, on the end of which is an interesting adaptor for strapping a bag to, with its mouth fully open. 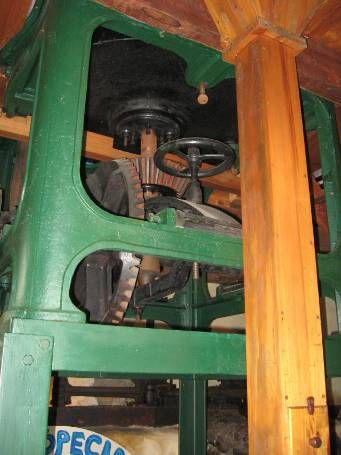 From the Stones Floor upstairs, the rest of the mill can be seen: 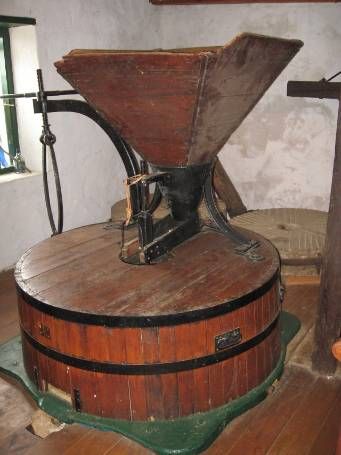 The cast base is level with the floor; the tun is interestingly made in exactly the same way as I have made the one for Compagnes Drift Mill with groove-and-groove planks with wooden locking strips between, even the wood is of a very similar thickness. The big difference is, here the lid fits inside the tun, getting around the problem I had, with lack of rigidity. 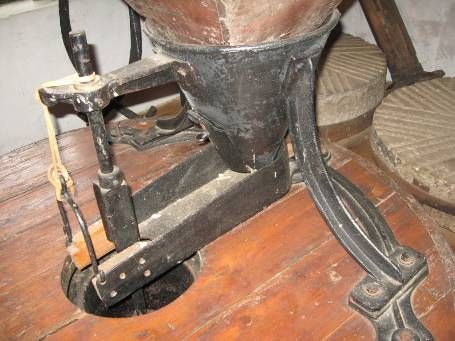 The rest of the ‘furniture’ is attached to the top of the tun, the ‘horse’ being made of cast iron. Very interesting! I suspect that the square wooden hopper is a replacement for a conical metal one, as it fits uncomfortably into the conical cast base. Behind is the lifting crane complete with ‘caliper’ for raising the runner and turning it over for dressing. Behind are spare stones, a runner and a bed-stone. The ‘twist-peg’ mechanism for raising and lowering the shoe to regulate grain flow is missing. I had a good look at the handle for lifting the tun: 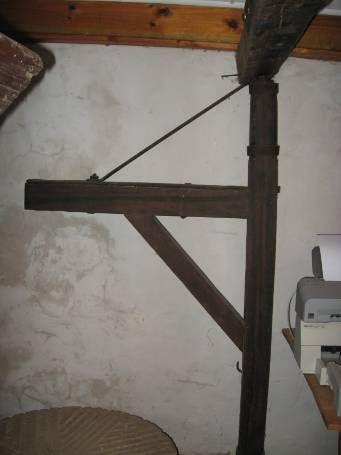 One might ask where it fits in and how it can be used. I think I know the answer. On the pinion shaft running off the pit-wheel is a spur gear without a job, which I mentioned above: 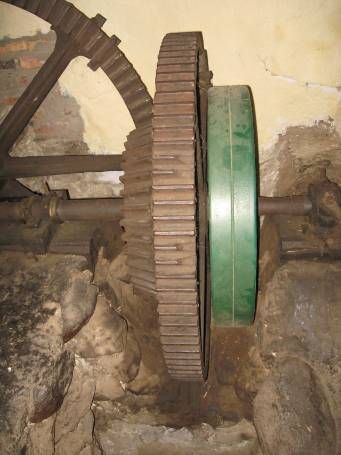 The left hand end of this shaft ends in a point, just over an unused ‘bridge-box’. This is the clue. This was previously a wallower shaft, standing upright and the spur gear would have driven a ‘stone-nut’ pinion on another shaft, driving the runner. So there is evidence that this was in fact a Vitruvian mechanism, either here or elsewhere, with a step-up ratio like those at Elim and Mill Bank. The built-in wooden crane is ideally placed to handle stones for this installation, lending credence to the possibility that this mill was previously Vitruvian. The conversion to a horizontal shaft is cleverly done; here is a picture of one of the makeshift bearings: 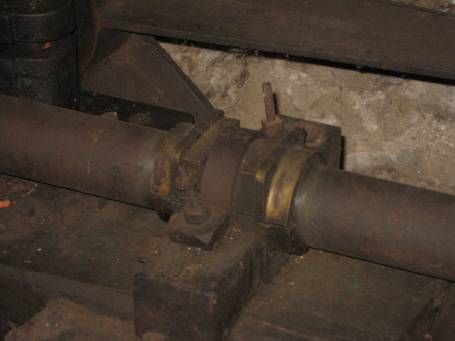 It looks like a wooden base and a wrought iron hoop over the top, holding the two brass half-bearings in place. Propped up in the corner is an interesting shaft, which I’m trying to think of a possible purpose for: 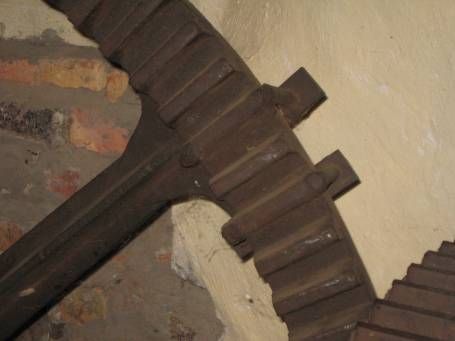 The view Estelle is enjoying from the upper stable door is impressive, over the road and the meadows beyond. Above the door are two beams for the lifting apparatus for grain sacks and at sill level two more stick out, possibly for a platform. It was a most interesting day! Tomorrow we have a tour party of about 60 people at Compagnes Drift, doing wine tasting and a Mill demonstration. Andy Selfe