Next Friday and Saturday, the West Cape Tractor & Engine Club is having its Annual Show, this year in Villiersdorp nearby. We’re pulling out all stops to make it an interesting show, which will include ‘Sheaf to Loaf’ exhibitions. Arthur Wilding’s 1921 Aveling & Porter Steam Traction Engine will be powering a Ransomes wooden threshing machine. Hermann Geldenhuys will have his roller mill and Gawie his ‘portable kitchen range’ including a Bolinder stove.

I had an order for 10kg of meal for baking at the Show as well as another order for 10kg. During the day, there were visitors who weren’t holding themselves back with their orders, which amounted to 10 more; so at last, I didn’t have to hold the Vitruvian Mill back! In the end I milled 34½kg. I mention this level of accuracy because we are interested to know what the losses are between grain sack and meal bag. We started with a new sack today and now have a record book.

But my first surprise was what the rats had managed to do in one week! 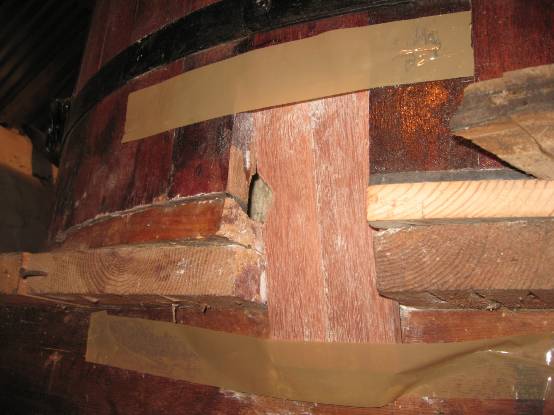 They really are determined to get in at all costs, and whilst I can re-make the plank which doubles as a spreader for the very top end of the meal spout, chewing away at the tun is taboo! There was plenty of evidence of the party they held inside the tun, but I’m pleased that the basin I left upturned over the eye of the runner was still in place. This meant that after removing the droppings from the top and around the stones, we could start milling reasonably clean.

A delegation arrived from the Tractor & Engine Club, including Founding Father Petrus Roux, along with Master Bakers Bol Hugo and Danny Roux, and Thys Fourie, who for many years worked for the Beaumonts on the ‘Home Farm’, Valley Green, in Elgin; his father before him. He and teams from Valley Green planted many of the vineyards on Compagnes Drift. They took the first 10kg from the Mill, and after a tasting, left very happy and impressed with the meal, the wine and the restoration!

I was feeding the grain in as fast as I could without bringing down the optimum speed of between 7 and 8 RPM. I had the sliding members of the weir well below water level, with one fully open and the other half open. This resulted in the mill pond being fuller than it’s ever run before, almost overflowing the sluice: 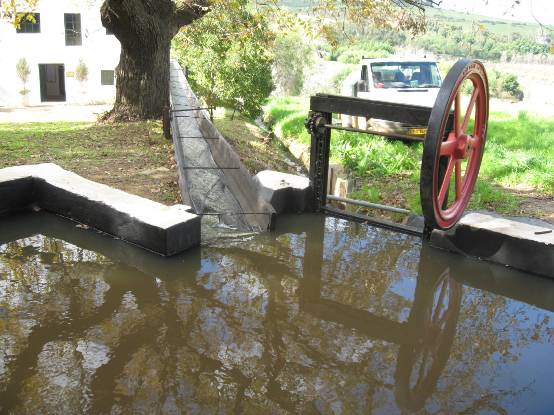 If we need more water over the wheel than this, we will either have to raise the top of the sluice, or modify the throat of the launder which tends to hold the water back.

What was very satisfying was that the trap-door on the wooden launder was able to handle the volume easily. I was worried that this would limit the volume of water over the wheel: 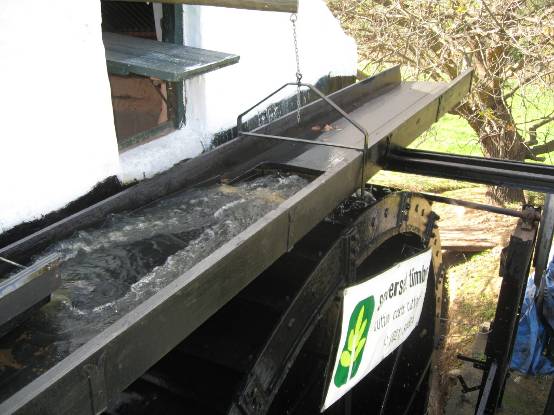 At one stage, I closed the trap door to stop the wheel. The water issuing unused over the end of the launder was impressive: 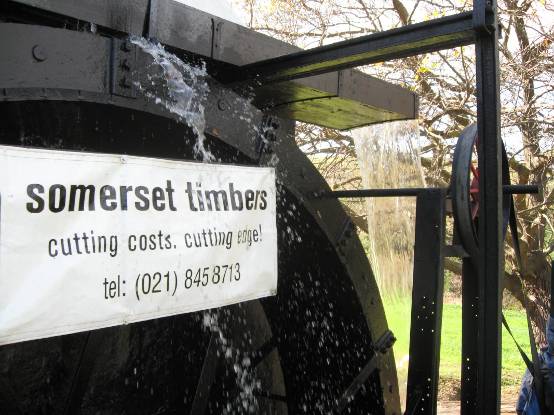 I was still concerned that the shoe wasn’t level after finding and fitting the missing spacer I made last week. I modified the top of the spacer a bit so that the shoe can swing up and down more easily, but with the crook string only attached to the rap side, the far side was hanging down. 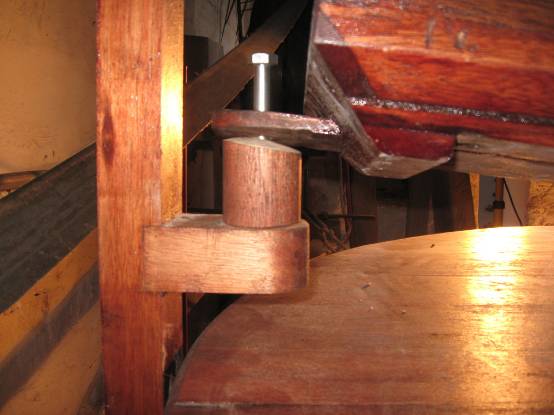 So I made a ‘wish-bone’ out of wire and after a couple of attempts, got it to work. This will be re-made to look a bit neater: 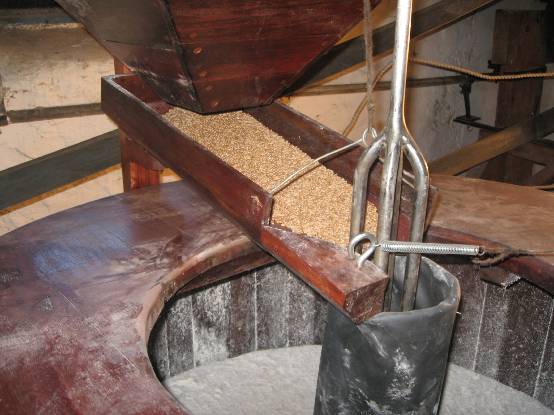 Some grain is still escaping at the bottom of the ‘sock’ and not getting ground, so now the shoe is ‘square’, the top of the sock can be stitched above and below its steel supporting ring to hold it steady. It also needs to be tapered thinner towards the bottom end.

It was a very successful day, both in milling and the level of interest expressed by the many visitors. I must make a ‘lectern’ stand for the visitors’ book which tends to be left closed on a table and overlooked.