The next day, I had arranged with Tinkie Conradie, a friend and fellow Tractor & Engine Club member to visit Kleinplasie Open Air Museum in Worcester, particularly to have a good look at the Roller Mill there. Tinkie was involved in dismantling it in Sakrivier, midway between Calvinia and Brandvlei in the Northern Cape, and installing it where it is. Unfortunately it is positioned in an area seldom open to the public, so despite a huge effort and expense to move it and with SASKO’s help to restore its internals, it was from the beginning, a bit of a white elephant. 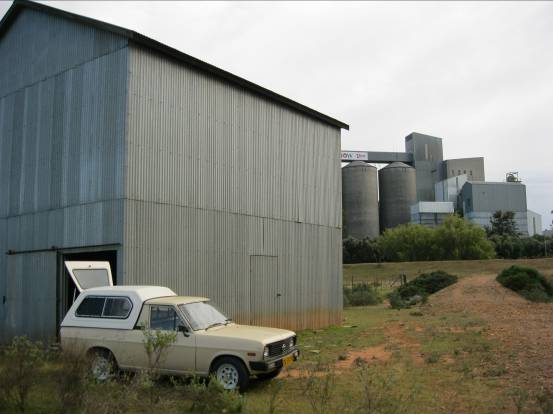 The old and the new! The building itself was built new about 15 years ago, but the intermediate floors were brought from Sakrivier. The original building still stands on the farm, used as a lucern store. 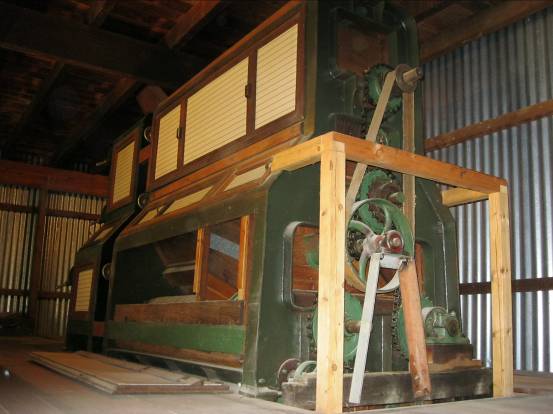 The Mill’s cast-in name is simply Midget Major Roller Plant, probably made by the Anglo-American Mill Company, Owensboro, Kentucky. It has four sets of rolls in the far section and about the same number of rotating screens in the longer part; the two are connected by five tubes with augers inside to propel the partly ground meal back and forth. On the subject of augers, the first exhibit in the doorway is a pair of augers which wouldn’t normally cause a second glimpse, except that they are examples of the two different types of segmented (as opposed to continuous) worm. 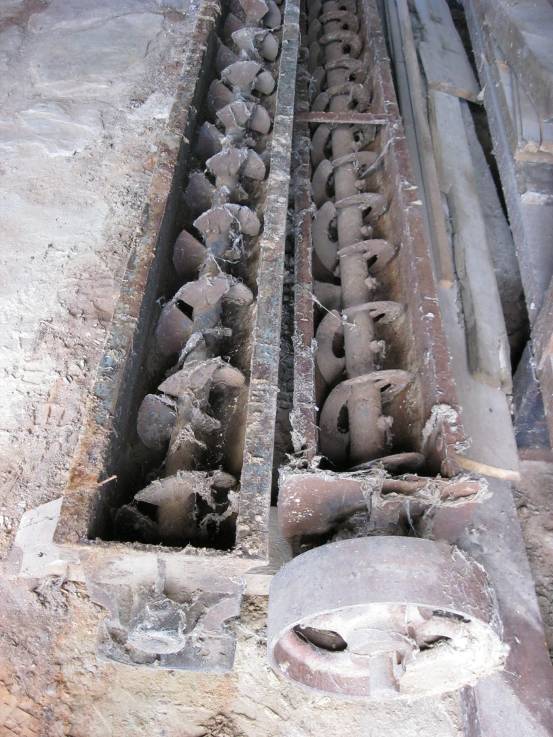 The one on the left has what is called ‘paddle’ blades; the one on the right is fitted with the ‘crescent’ type. I wouldn’t have noticed, had I not read about them in a book I’ve just received, called Flour Milling, by Sir Joseph Lockwood. 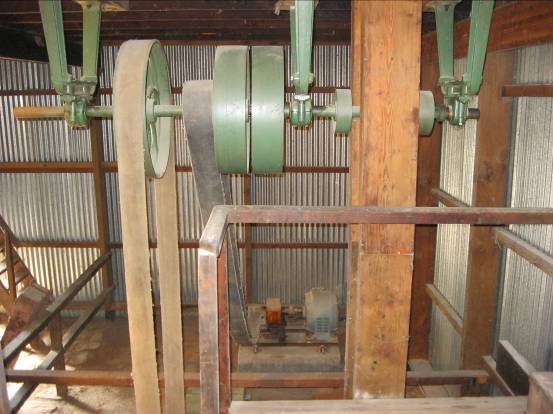 The original Mill was powered by a Blackstone ‘P’ type enclosed engine which was not operational, so it was replaced here by a period electric motor and Allen-West star-delta starter and a gearbox which Tinkie made at the time, driving a pulley on which the main belt runs up to the fast-and-loose pulley pair on the line shafting above. Also on the line shafting are pulleys for driving the Mill itself, the (double) elevator and the S Howes scourer. 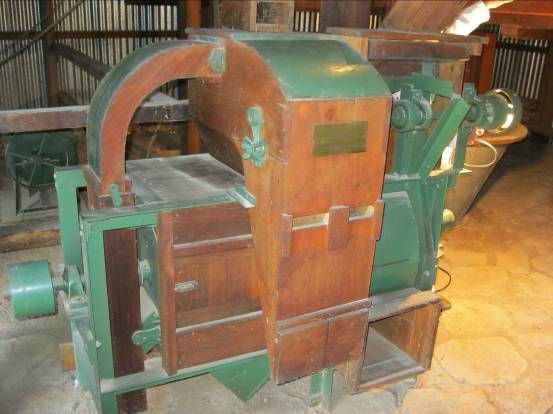 A decision was made at the time not to re-install the Howes machine in its place, so while it was restored, it is unfortunately a free-standing exhibit on the ground floor. 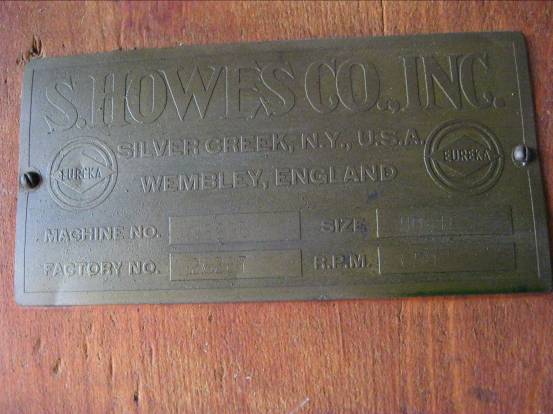 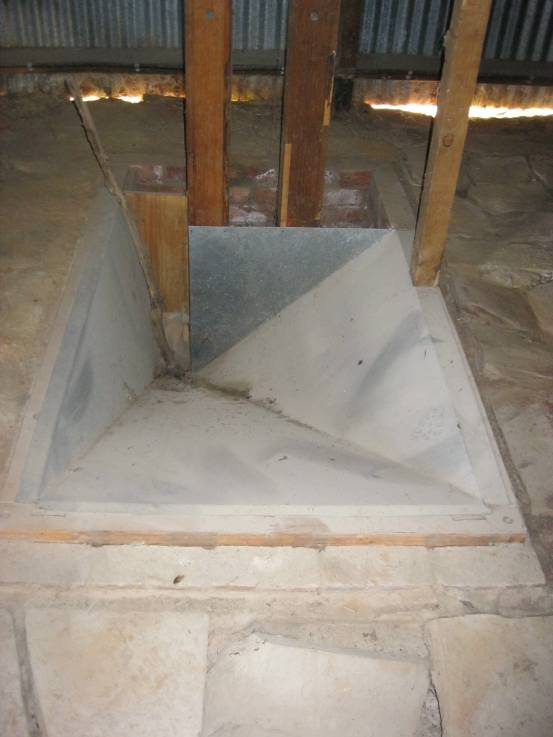 In its original format, grain would have been tipped into the hopper at the base of the double elevator and this would have fed into the far section, closest to the wall. The discharge from that side of the elevator was into the ‘dirty’ grain bin upstairs. 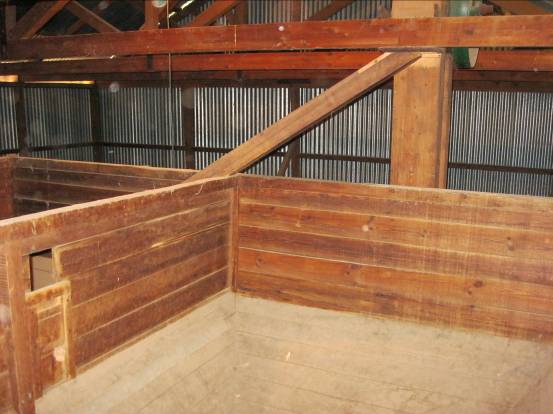 The discharge chute into the ‘dirty’ grain bin has not been refitted, but from the left hand (clean) side of the elevator, the chute is connected to the ‘clean’ grain bin on the left. The clean grain bin discharges directly into the Mill below. The outlet which should be under the dirty grain bin is displayed upstairs as a separate item and should be attached to the rafters below. 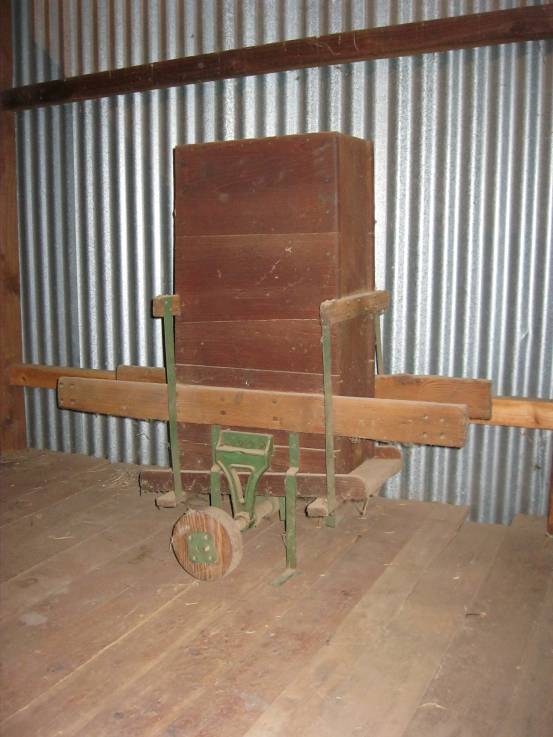 This shaker, driven from the Mill above it would feed the Howes machine gradually. The cleaned grain from the Howes machine would have poured into into the rear (descending) trunk of the side of the elevator furthest from the wall. We found the chute and the place where a hole of the correct size was blanked off in the trunk. 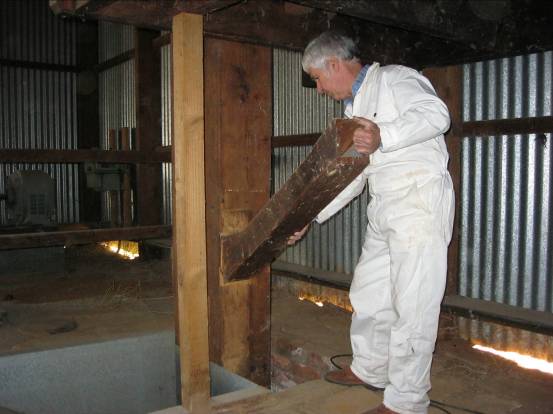 The decision not to use the Howes machine was based on the fact that any grain used in this Mill would come from Sasko spotlessly clean. What a pity that imagination had not prevailed at the time! Now the machine is set so that clean grain, poured into the hopper at the bottom, feeds directly into the ‘clean’ side of the elevator, up into the clean grain bin and into the Mill from there. 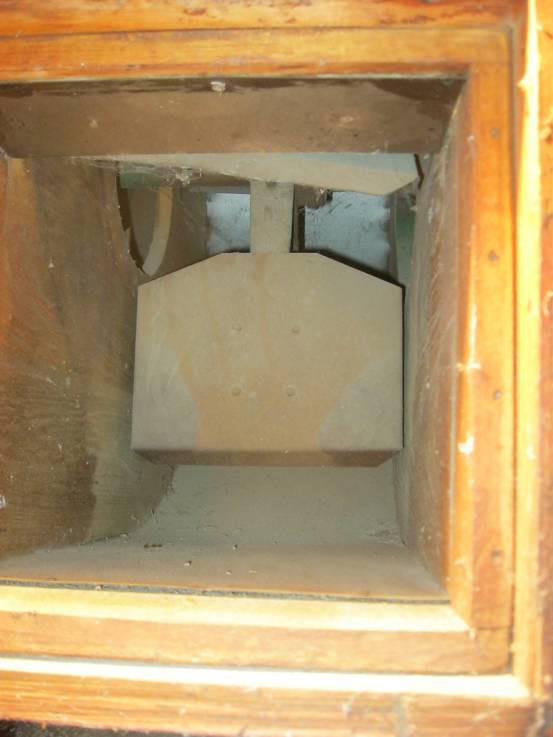 The trunk for the air blown through the Howes machine from the powerful built-in fan is also upstairs, and the three parts of the Cylcone are displayed downstairs, unfortunately not assembled. 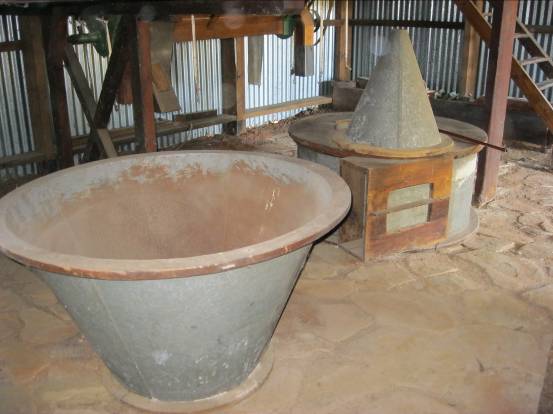 There is one more machine which we do not know the purpose of, but presumably it is also used in the grain cleaning process; possibly a seed grader. It is also displayed loose on the ground floor: 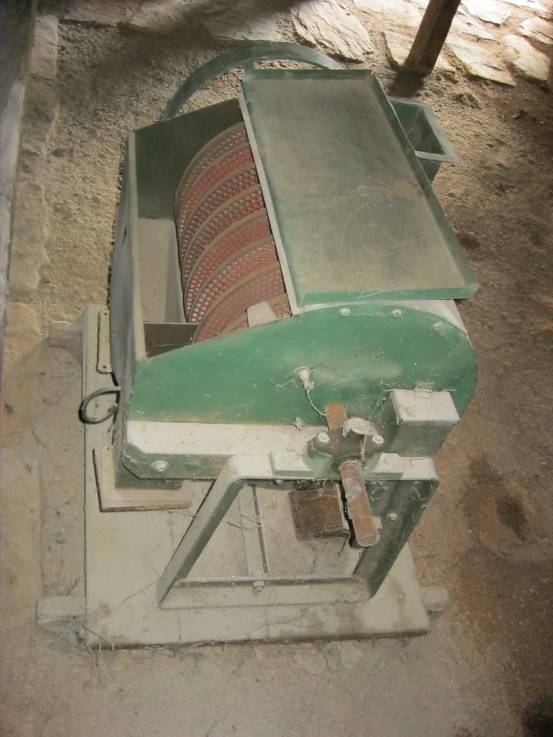 On the inlet of the Howes machine is a prelimilary grain cleaner which operates exactly as the Grain Cleaner at Compagnes Drift should. Unfortunately we didn’t have any measuring equipment with us, but Tinkie will return to get exact details, so that the correct meshes can be bought. 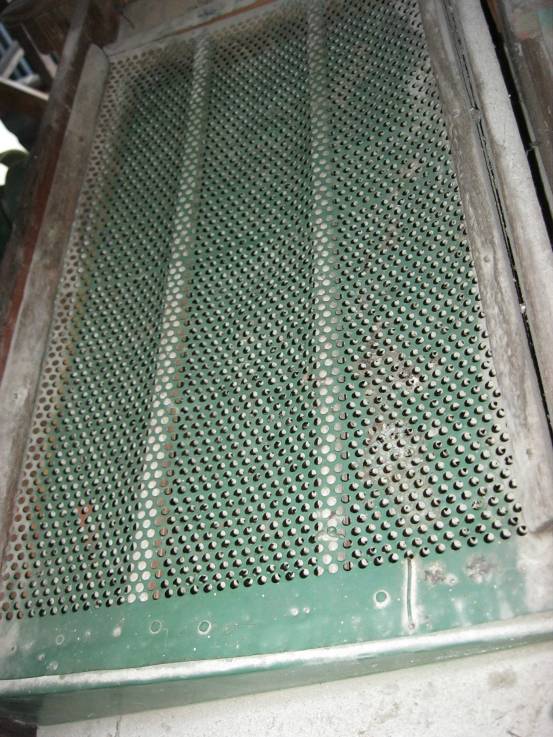 This assembly shakes longitudinally in the same way. The upper perforated sheet with holes about 5mm in diameter will allow the grains to pass through, yet the stalks, husks and bigger stones will be shaken off to waste. Below this screen is another with much smaller triangular perforations which will allow smaller stones, earth, dust and the residue from droppings from the threshing floor and the dung from the floor itself to pass through, also to waste. This leaves only the partly cleaned grain from between the two screens, to pass into the scourer below.

Also particularly interesting was the method of joining the fine screens on the drums inside the screens section of the Mill. 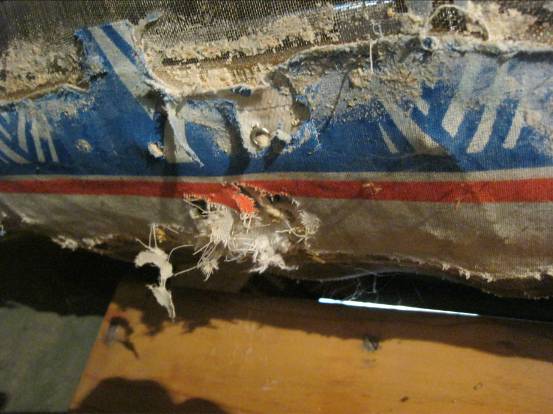 ‘Ticking’, the white fabric with double black weave every so often, is folded double over the edge of the metal screen and stitched on as a hem. Eyelets are inserted very frequently and the two edges are laced together so the mesh is pulled taut. Over this join is glued a strip of fabric, in this case, a strip of Sasko meal bag. Ticking is also used in the frames of the covers over the Mill and screens section. It is known for its impermeable weave.

Of further interest were the bagging chutes under the Mill. 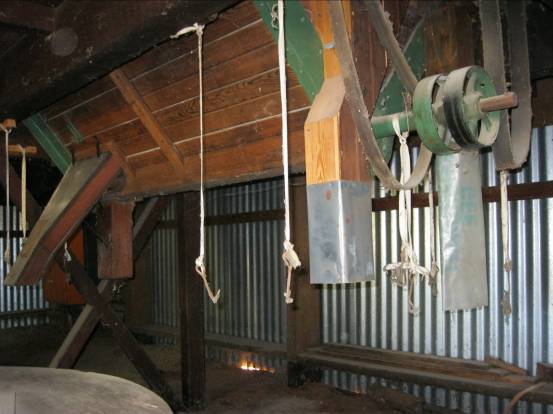 A sack scale might have been positioned below the chute, under which the bag was hung. Other chutes would have been for bran, brown flour and possibly cake flour.

We locked up and went to the older part of the Open Air Museum yard, laid out like a village in the 1700s. Of particular interest to us were the Mills, particularly the water Mill. 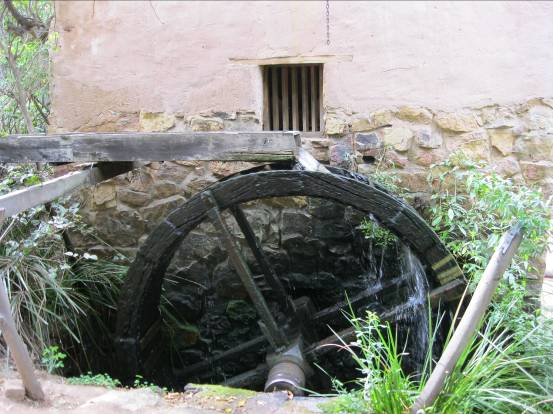 Fortunately, it was in operation. Tinkie told us he machined the axle-tree for 4-spoke compass-arm wheel, which was brought from the farm Dwarsrivier near Clanwilliam. 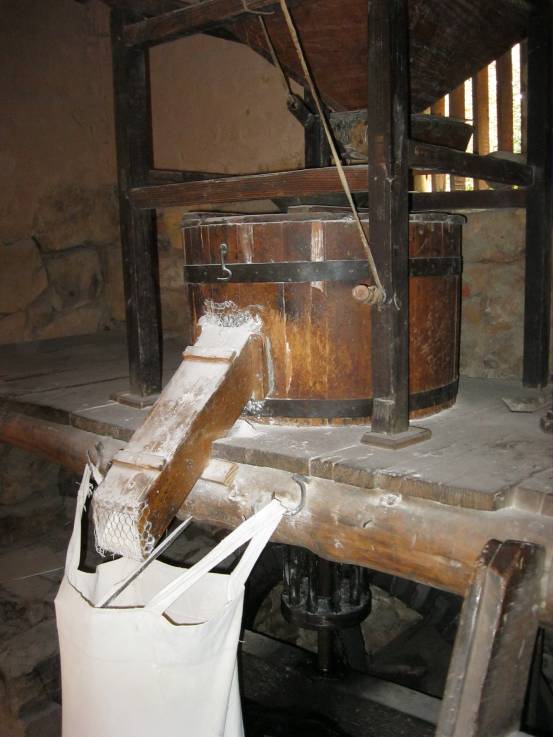 The feed from the meal-spout was impressive for its size; the texture was fine, although there were some coarse particles. This Mill is used for all the meal and bread sold at the museum shop, the bread being baked in ovens in the ‘village’. We are planning to build one of these at Compagnes Drift, so I came away with Kleinplasie’s diagram and instructions! 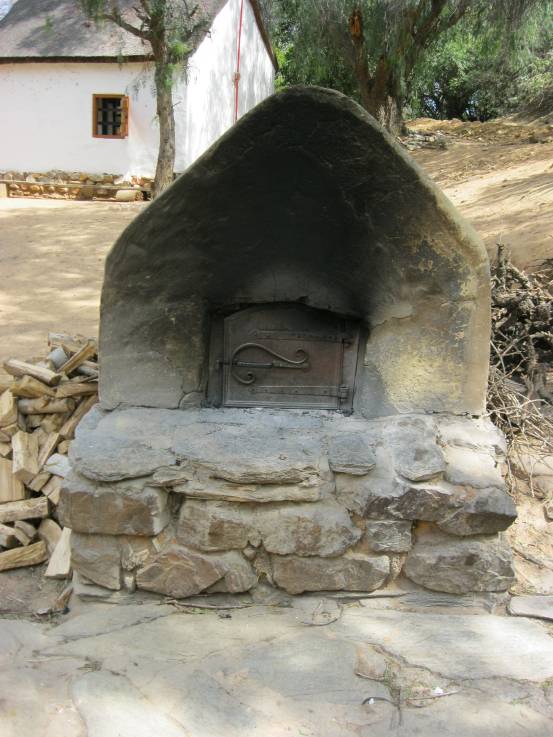 We then had a look at the Horse-Mill, which, according to Chester Staples, comes from Bergplaas, Touws River. 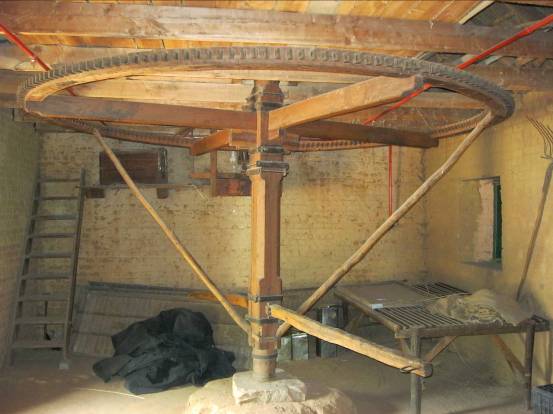 Instead of having a woven rope made of thongs driving the Mill, this one drives directly from cogs facing outwards from the big wheel on to a lantern pinion just visible on the far side. The Mill is on the upper floor. 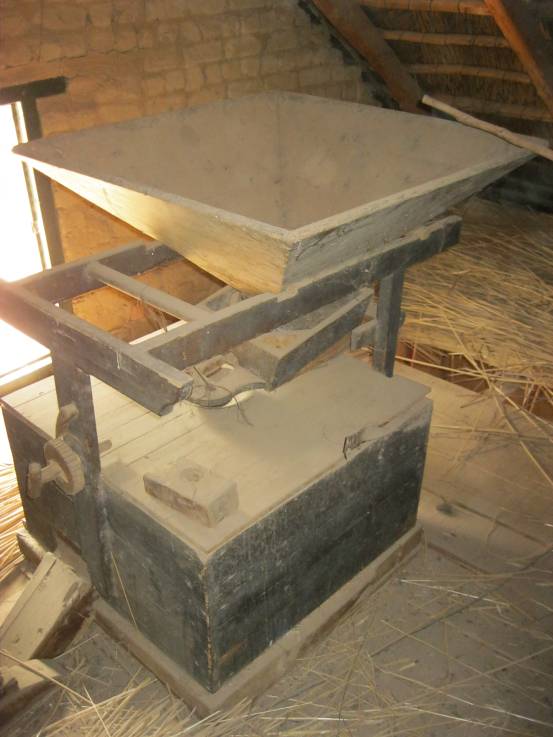 The Mill is very neat and self-contained and the shoe has a mesh base and reverse slope below that to discharge dust, earth etc. over the rear edge of the tun, as we have seen elsewhere, Kabida particularly.

Thinking that to be the last Mill to view, I was pleasantly surprised to find another, set up to be driven by their Horse-gear. 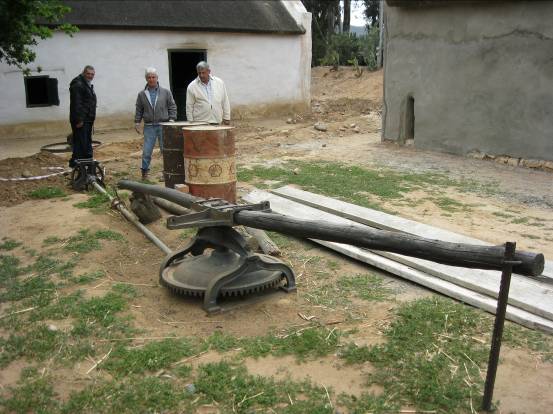 The slot in the wall to the right is where the belt from the step-up gear near Tinkie and Jan are standing. The pulley and pinion have been removed and are stored in the forge behind. 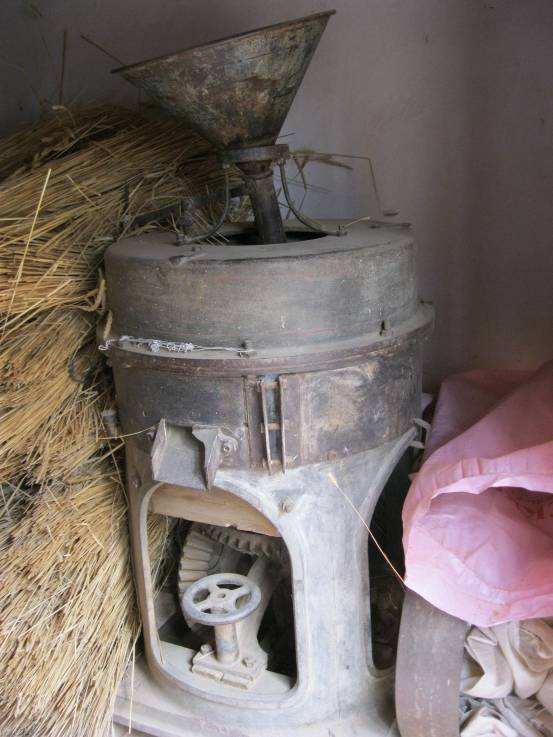 My first glimpse of this Mill gave me a double-take! I had seen a picture just this last week of an identical one at Oakhurst, near Hoekwil, where owner Jake Crowther has asked me to come and give advice on. They plan to start restoring their water-turbine-driven Mill shortly.

Sounding very knowledgeable (but taking a big chance!), I said, ‘That looks like a Howard Farrar Mill.’ 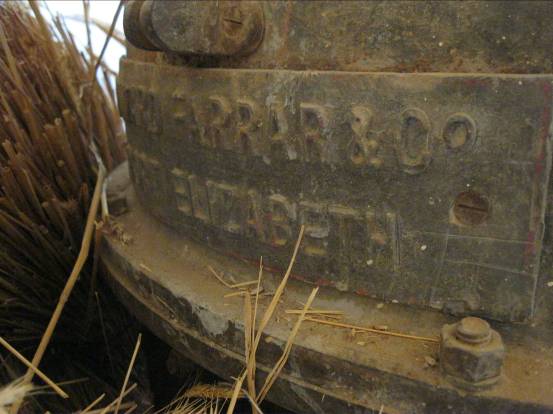 The give-away was the cast-iron tun, not seen before, as well as the ‘silent feed’ on the hopper, which does away with the necessity for a damsel and rap.

So that was a morning well spent!