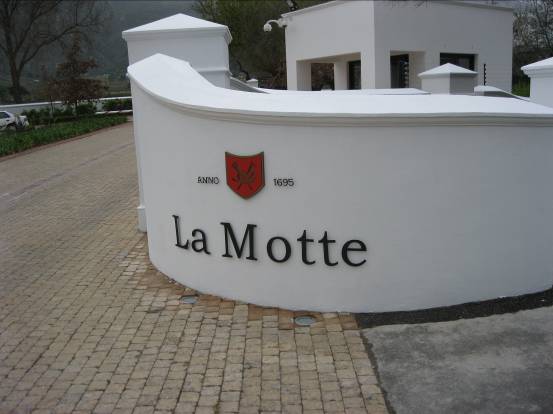 The date on the farm gate says 1695. It’s believed the Mill was built in 1721, but James Walton reported in 1974 that the water wheel and machinery had recently been brought from the farm Matjies Rivier in Ceres by Dr & Mrs Anton Rupert.  At this point, it’s worth quoting what Dr Rupert wrote at the time in the preface to James Walton’s book, Water-mills, Windmills and Horse Mills of South Africa, especially as this report is about his own Mill: 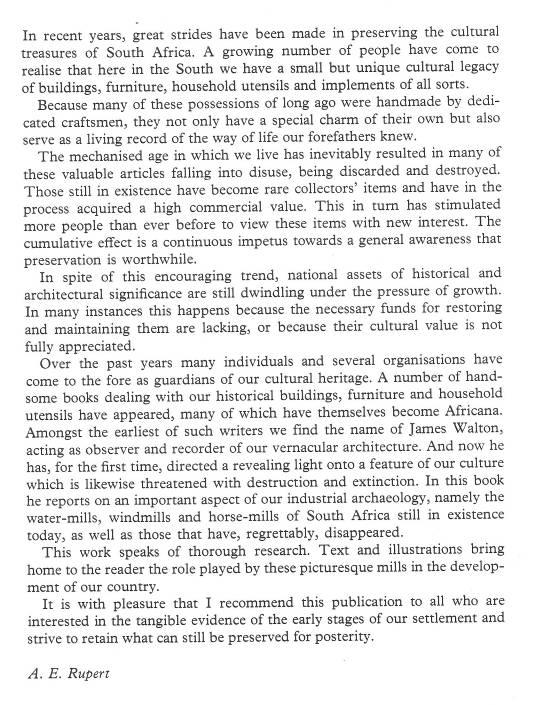 Whether this Mill has ever since then produced a good quality meal is uncertain, but Pietie le Roux, Senior Farms Manager of the Historic Wines Management Company www.la-motte.com  approached me to help get it running properly. I had visited the mill before so I knew what to expect, and Pietie visited Compagnes Drift Mill recently to see what we’ve been able to achieve there.

The samples of meal I was shown on arrival were very rough in texture, yet there was also some very fine meal, but the stones had clogged up and nothing was coming out. We first had to dismantle the furniture, after removing grain from the hopper. 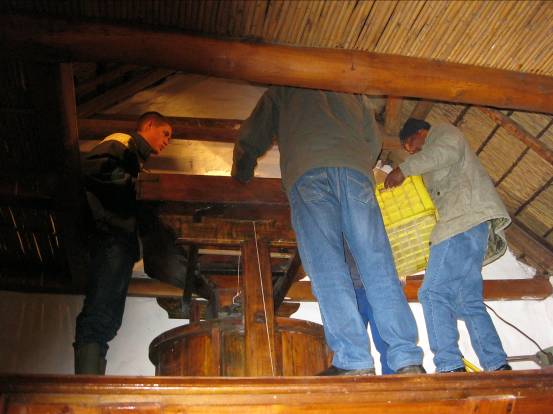 What looked strange from the outside was that both the top of the runner and the underside of the bedstone had been dressed; what could we expect on the mating faces? Actually, everything looked normal there. 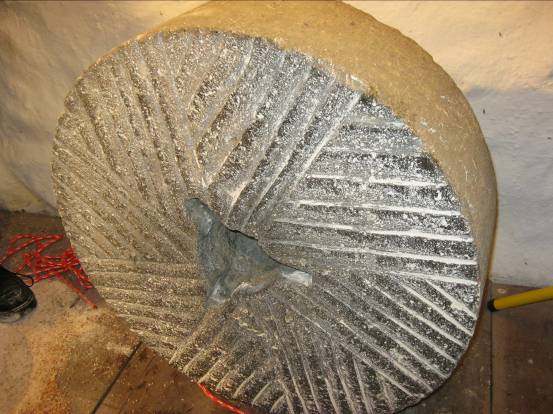 Fairly normal 8-harp dressing, the only strange feature was the multiple ‘master’ furrows, often two but also three in some cases. The totally clogged furrows can be seen in the bedstone below. The shims fell out from between the three-pointed rhynd and the runner. 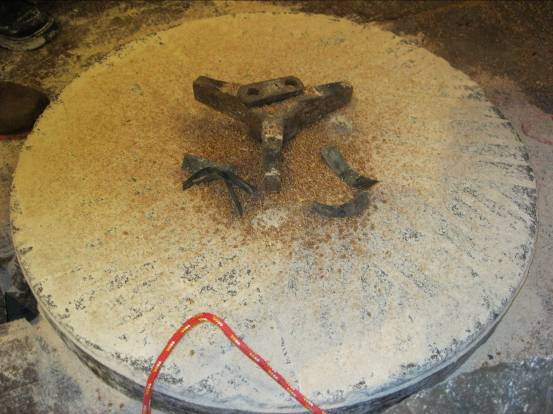 First we gave it a good clean, using a wire brush to dislodge the caked-on meal. Working then from basic principles, we checked whether the bed-stone was level. It wasn’t! It required wooden shims of about 5mm thick on the water wheel side to get an even reading. Side to side, it was good. We could then set up a trammel, to see if the stone spindle was vertical. It wasn’t! 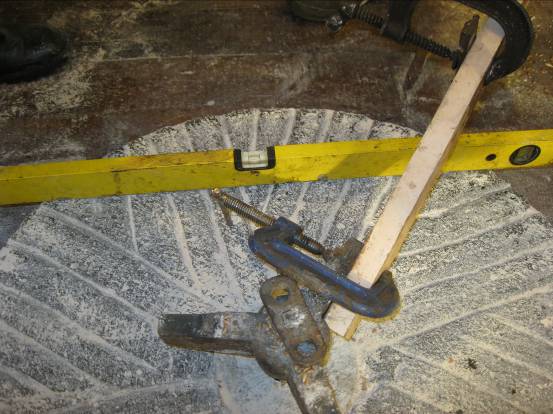 Here we hit a snag, because we couldn’t move the bed stone forward, and the bridge box has no hackle-screw adjustment. We needed to move the bridge-box towards the water wheel side, to reduce the space between the trammel and the bed stone at the front and to increase it at the back. Once again, the lateral readings were correct. We raised the stone spindle and lowered the bridge tree, which in this case is a large H-shaped wooden frame with two adjustable lighter bars at the front, and levered out the block of some hard, light plastic-type material. Behind the block, wedged in was a block of wood. This also came out. 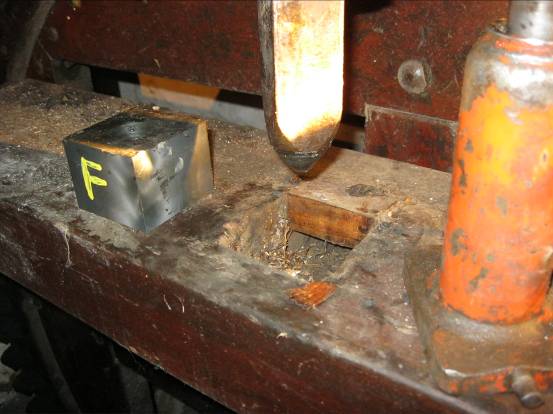 With the wooden block at the rear removed, the next step was to refit the bridge box into the cut-away and lower the pointed end of the stone spindle back into the indentation in the bridge box, and then move the bridge box backwards and shim the front with wooden spacers.

Here we hit another snag! The lantern pinion was up against the pit wheel! There’s no longitudinal adjustment between the axle tree and the pit wheel, so the only way out was to move the entire axle tree, pit wheel and water wheel outwards. But we couldn’t! The shoulder of the outer gudgeon was up against the bearing set in the cement plinth. The only way we could remedy this was to break away the cement around the bearing. The cement was thankfully quite soft. We could then jack up the outer end of the axle tree and move the support bearing outwards. 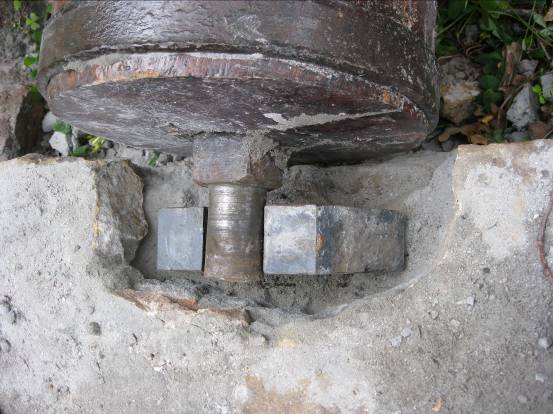 The whole axle tree could then be levered outwards, until the end of the axle tree was rubbing against the plinth. There is a natural outward force from the meshing of the pit wheel and the lantern pinion, so this might need to be dealt with. We mixed up a whole pot of Steenvas ST100 and worked it in well behind and at the ends of the bearing block. 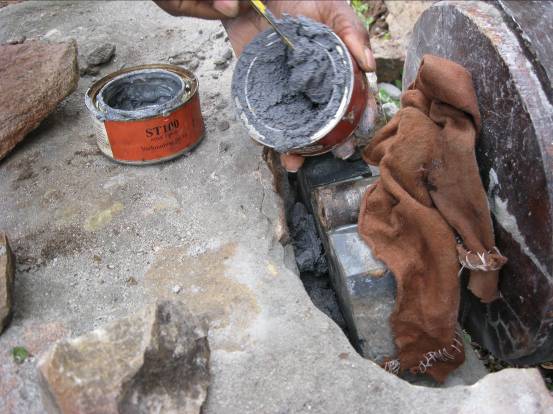 Then the bridge box could be moved further towards the water wheel and shimmed with hardboard strips. We were so successful that there was now a gap at the rear when we trammelled again! 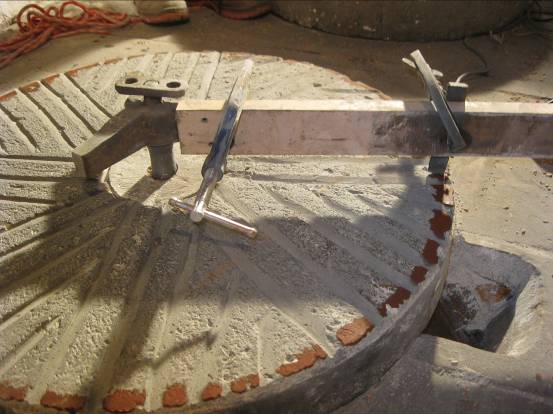 Rectifying this was no problem! I trimmed the original wooden block which came out from behind the bridge box to size, with a slight taper, and hammered it home. This gave us a zero reading all around! So now we had a level bed-stone and a vertical stone spindle. 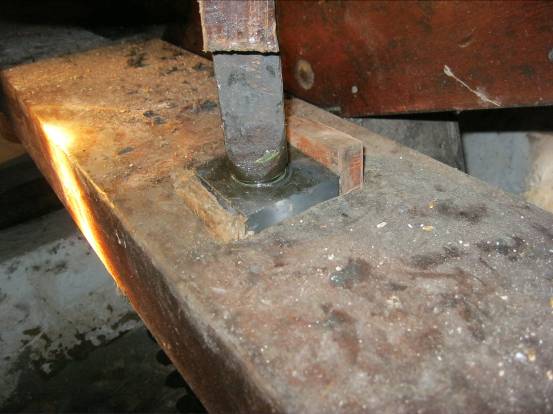 I had decided that the stones could well be improved by dressing. Many of the ‘secondary’ furrows did not reach the outside, so these needed to be opened up. Closed ends wouldn’t help with the clogging up of the furrows with meal! Otherwise, I simply deepened the furrows as I found them with the diamond disc on the small angle grinder, as I was taught recently by Michael Stoate http://www.stoatesflour.co.uk/ . In a few places I couldn’t grind all the way to the eye, so I tried my hand with the mill-bill which is one of the tools on display. 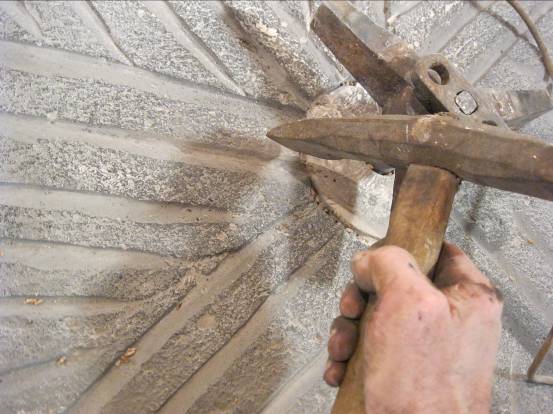 I had in the previous week prepared a ‘staff’ out of a very heavy old piece of wood, probably teak, from a door frame. I had the working surface planed, then I ‘proved’ it on the bed of my big Mitchell flat-bed lathe. Many applications of chalk on the bed and a lot of sanding away of the high spots gave a very flat surface. 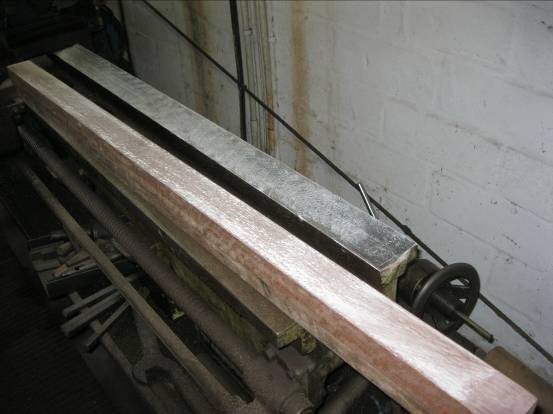 Now was my first chance to use it, and the results were very surprising! After mixing and painting red oxide on to the face of the staff and rubbing it over the bed-stone (which is supposed to be perfectly flat) there was only a narrow ring around the rim! 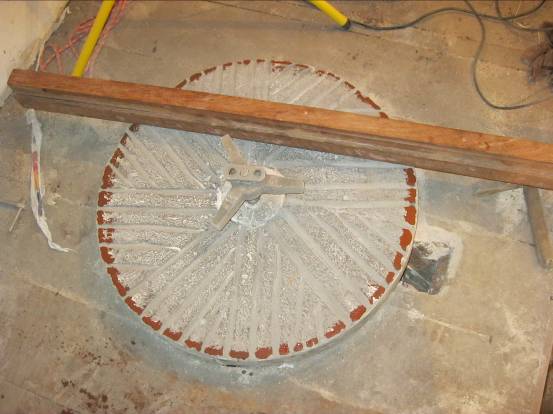 So the bed stone was hollow! What about the runner? 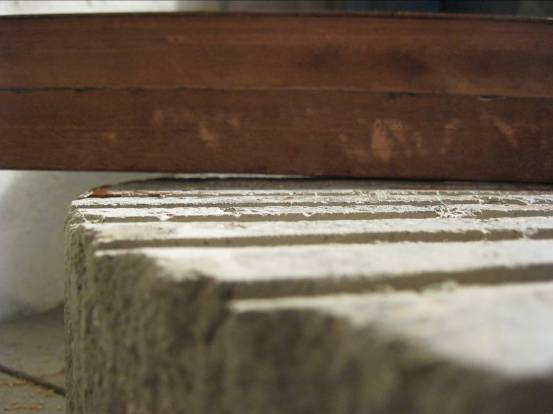 Very convex! Could this have been deliberate? What about the ‘swallow’, the area of about the inner third of the mating surfaces of the stones which is supposed to have a reasonable gap? We decided to reassemble the runner and test it like this. I haven’t ever worked with a three-pronged rhynd, but it was quite easy to shim the runner from above to make it run true. 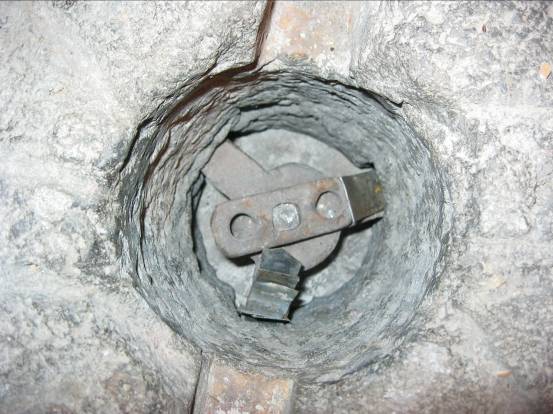 The results when we put wheat in the eye were disappointing, to say the least! Actually, nothing much happened. Some grain in the eye started showing signs of having been milled, but it wasn’t working outwards.

There are two possible reasons for this: too little ‘swallow’ as described above or too little speed. The runner certainly wasn’t running fast enough and it was easy to stall the water wheel. Inspecting the flow of water over the wheel showed why. The end of the launder is much too far beyond the top dead centre of the water wheel, and to compound the problem, the strong North-wester was blowing the water away! 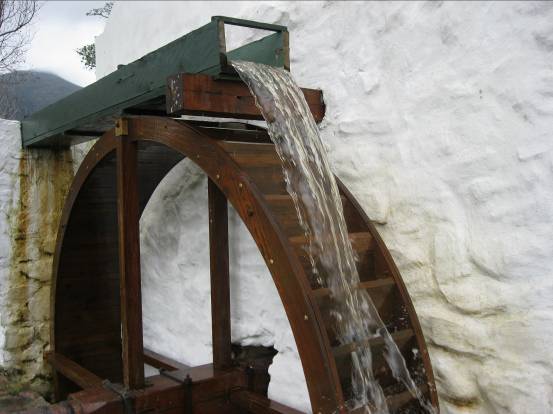 I could only assume that whoever built the launder forgot to insert a trap-door just past TDC, and made the end of the launder actually too short; when the trap door is closed the water should go well beyond the wheel and fall unused into the tail race. 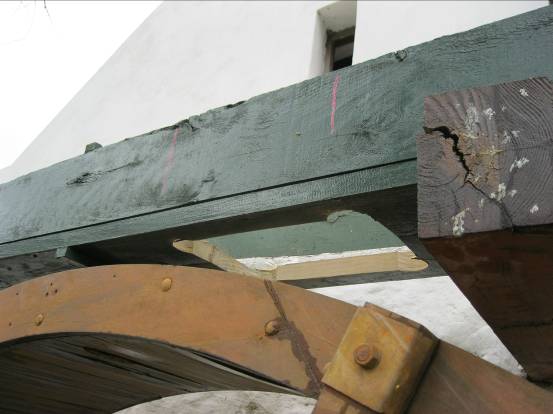 We soon rectified the problem by making a hole where it should be! A trap door, operated with a lever from inside by the miller, will still have to be made and fitted. The increase in power from the wheel was, as expected, very noticeable. However, this made little difference to the poor milling. With my head close to the stones floor, shining a torch between the stones, I could see that the outer third of the stones, which is where the milling is supposed to take place, were wide apart! However, with the faster speed, some meal was coming out, but it was still too coarse. 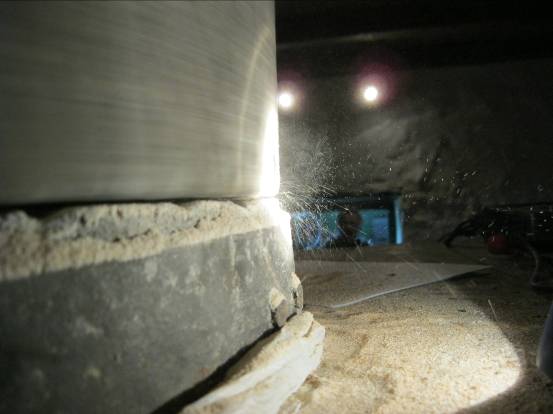 Clearly, something had to be done about the curved surfaces of the stones. But what? Make the bed-stone flat and the runner slightly concave? That would be a big job! In the end, we decided to experiment with a flat runner and to leave the bedstone concave, which would provide a ‘swallow’.

I had brought along a print-out of the chapter on Stone Dressing, from Friedrich Kick’s book, Flour Manufacture, dating from the 1870s, kindly scanned and sent from the UK by John Sawle.

So, I drew out my primary triangle with chalk and got stuck in with the angle grinder and the staff, with many applications of red oxide. It was a tedious process, but I cannot think of a better way of tackling the job! 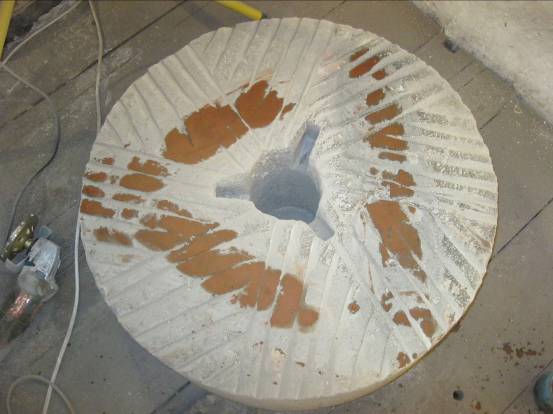 Once the primary triangle was reasonably flat, I drew the second triangle overlapping it, like a Star of David, as indicated in Kick’s diagram. There was less material to remove this time, but a lot still had to be removed from around the eye. Once the second triangle was done, the patches between them had to be worked down and then the whole runner could be tested with the staff.

Every time, just the areas where the red oxide had rubbed off had to be dressed with the diamond disc, until the primary triangle, still slightly visible in the picture below, was also showing red. 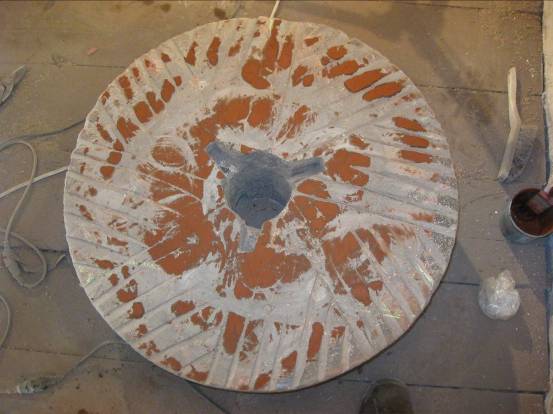 Once I was happy that the stone was flat, I could re-make the furrows, which had almost entirely disappeared in the centre! I used a strip of wood to guide the grinding disc.

We could then tip the stone over, man-handle it back into place and shim the rhynd all over again. 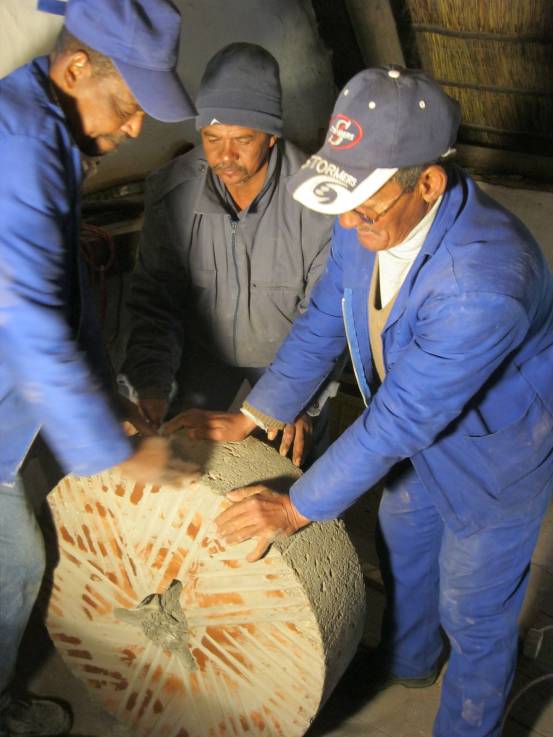 This is the team who will be running the Mill, all are technically minded; Dawid, Kallie and Alwyn.

The results were very pleasing, so we cleaned up and reassembled the furniture. The runner must still have a sweeper fitted to encourage the meal around to the spout but we were happy with the meal that we swept manually to the spout and caught up in a bucket below. 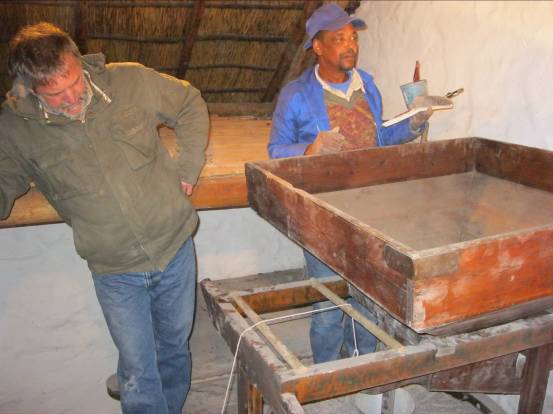 Pietie is looking very pleased with the action of the Mill. After 9 hours of hard work, Dawid is ready to pack up! Just after this, a cog came loose from the pit-wheel, and we found they weren’t pegged, so we stopped. 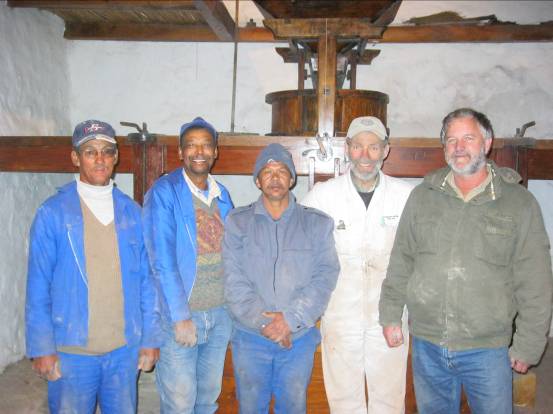 Team Photo: Alwyn, Dawid, Kallie, Andy and Pietie. I took a couple of shots of the farm on the way out: 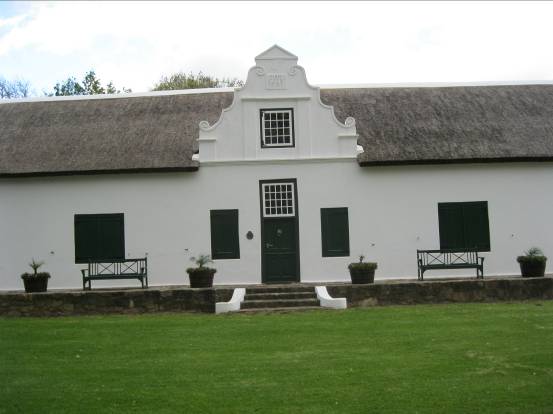 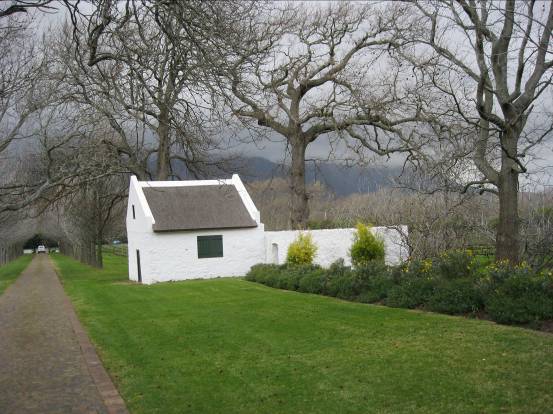 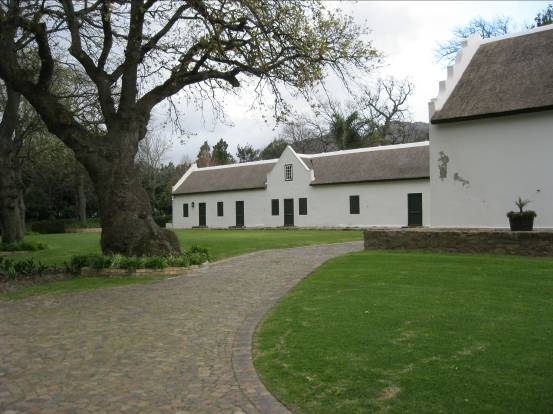