Another busy day in preparation for the Open Days next weekend!

First some tidying and organising inside. I had brought some laminated sheets, instructions for the bread machine, explanation of the crest on the Stamford Mill, lubrication of the wooden cogs with beeswax, etc, so those were put up along with several articles which have appeared in the press about our project: 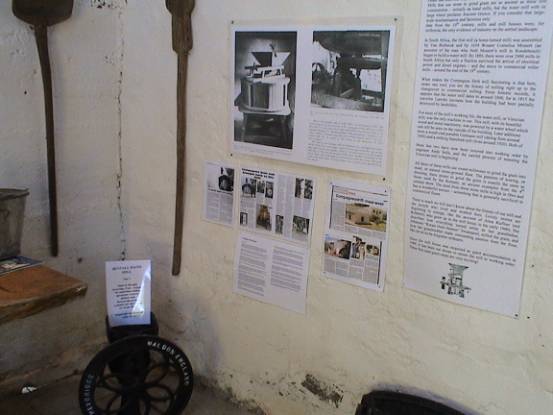 Hermann made the mistake of popping in, so he was press-ganged into helping doing some heavy shifting, including putting the stove into its place, at least temporarily: 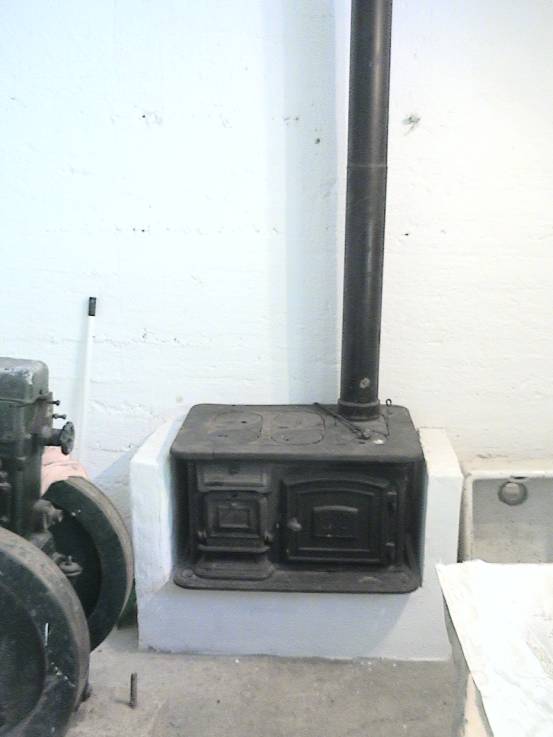 Not necessarily at its correct height yet, but it helps get it out of the way and to make an assessment of how much to build up, if necessary. I then moved the scythe which was obscured behind the chimney: 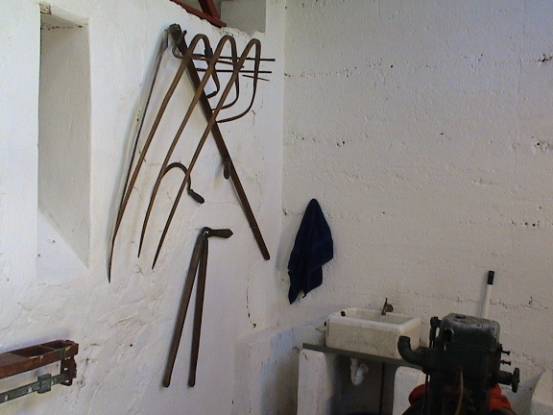 And moved the sickle under it. The sack scale, just visible in a new position where the old planks were, made space for the big table to be moved closer to the door to make room for the person doing conditioning of the grain next weekend.

The Lister 6/1 is still in the way there, but in the process of trying to move it, Neil and the farm staff freed it off! I had thought it had stood outside and had seized up completely and would only be of any use as a donor engine for parts. Now I think we might use it for the recirculating pump!
Then it was out with the rubber gloves and the Iscor Black and I got stuck into the final painting of the water wheel. Final, it will never be! Kerry was saying I'd be pleased when it was over... not so! It's fun to slap the stuff on, it gives a pleasing lustre, and the smell makes you feel you're clearing your lungs out! In fact another 25 litre can came down in the week, there's only about 5 litres left in the first big can, so with the first small can, that means there's already 25 litres on the wheel!

First I did the tall support pillar for the launder, then the back of the shrouds, facing the wall. This was a painstaking operation, doing a bit at a time, putting the pot down, reaching up and turning the wheel a bit, then painting the next bit. Sounds easy, but the brush and pot stick firmly to the rubber gloves! The next big painting job was the outside of the planks, having done the inside last week. For this I stood on the top of the wheel (carefully making sure my weight didn't start the wheel turning!), did a few planks and the metal strips between, then allowed the wheel to turn a bit, and so on. The result is spectacular! Looking diagonally down and across: 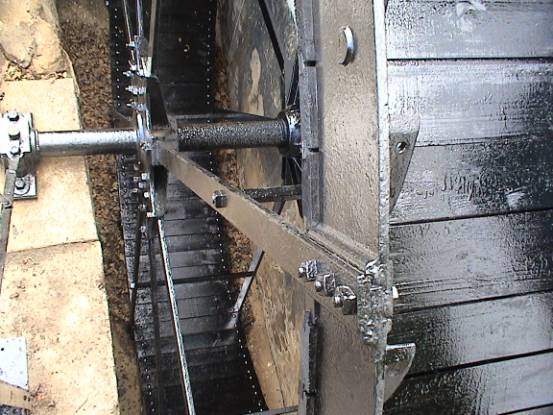 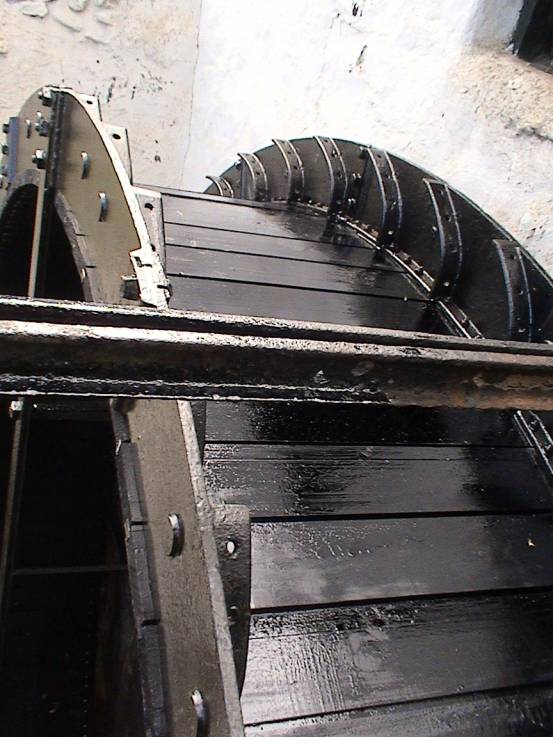 And downwards into the tail race: 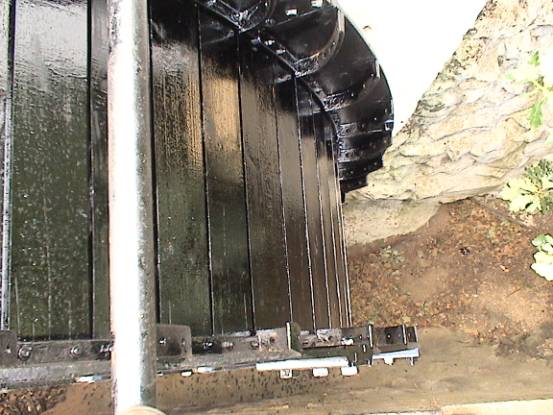 Now the wheel is ready for the buckets! The metal plates are ordered for that, as there's yet another price hike coming at the end of the month. In the end, we've decided on 1.6mm pre-galvanised sheet, and I'll devise a press tool to make the curve and then fold the end over.
We needed to build up some fresh stock of meal for the first buyers next weekend, so I conditioned two batches and milled them, feeding the siftings through twice. In the end I had 11½kg of meal and less than ½kg of bran.

A good day! Now we're ready for the Open Days!

One further word, last week I said I was being watched. Some people could not even see the well-camouflaged grasshopper, but one of our readers, Stephen Morley did, and offered this:

Regarding your critter, it appears to be an Orthoctha dasycnemis, of which there are 17 similar species in the genus. (Grasshopper)
See Struik's field guide to insects, 2004 edition, page 104, number and photograph 4, common in areas of thick tall grass, feeding on tough and soft grasses. Somewhere in my past insects had some draw, my specific interest was praying mantises !

Thanks, Stephen, you are a man of many interests! The reference to the film Pan's Labyrinth, was that the star, young Ofelia was contacted from the world of the Faun by very similar looking insects which vibrated and turned into fairies. The creepy thing about this film (not for the faint-hearted) is that it was set at a water mill!