Any collector and restorer of Stationary Engines is always on the look-out for unusual pieces of equipment to drive with his engines, so making them more interesting to the general public. It cannot be often that the occasion arises to drive a whole mill house! I have had this fortunate opportunity recently on the farm Compagnes Drift in Bot River, which dates back to 1750 and was an outpost of the Honourable Dutch East India Company (VOC). The farm, home to the Beaumont family, is situated about 100 km due East of Cape Town, and luckily only 23 km from Elgin where I live. 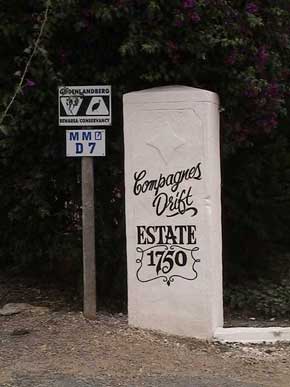 I have been working occasionally on the tractors and other farming equipment on the farm for over 20 years, and had often asked to be shown 'the Mill', but the opportunity never seemed to arise. During October 2006, I tagged on to the tail of a tour organised by Joanna Marx of the 'Friends of Mostert's Mill', for the Archaeological Society. While viewing the water wheel, even before entering the building, Joanna asked me what the strange contraption was sticking out of the side of the building to the right of the water wheel. 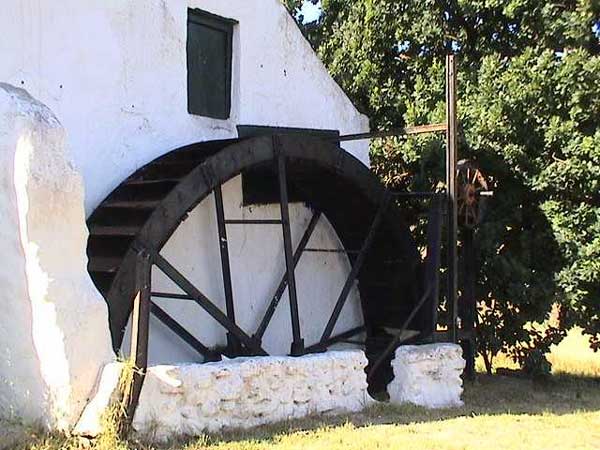 The water wheel of Compagnes Drift Mill. High up to the right, the input pulley for engine drive can be seen. The launder for supplying water to the wheel has long since rotted away, but the supports are all still there.

It was clear that this flat-belt pulley, with its bearing supported by an upturned lorry chassis and a shaft disappearing into the building, was an external drive for times when no water was available to turn the water wheel. Below and to the right are mounting bolts and wooden bearers for an engine.
Once inside, this was confirmed by the presence of a pair of fast-and-loose pulleys on the end of a line-shaft, exactly opposite the small input pulley which protrudes through the wall. Under the pulleys there is striking gear which can be remotely operated from outside the building near the engine by the person who has just started the engine, or intends to shut it down. On this line shaft are six other pulleys set up to drive the machinery inside. 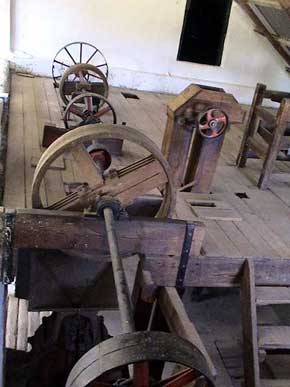 Line shafting, stretching the full length of the building. The furthest pulley drives the Gutmann mill below and to the right, the large wooden pulley drives the Stamford mill directly below. The top of the elevator for grain for the Stamford mill can be seen, and also part of the grain cleaner.
Machinery inside includes a Blackstone 'Stamford' mill with vertical 24" French Burr Stones, a German 'Portable' mill made by Gutmann in Frankfurt am Oder, a seed cleaner and two elevators. In addition, driven directly from the water wheel is the original 'Vitruvian' mill, lying dismantled, apparently for stone dressing, but with many parts missing. 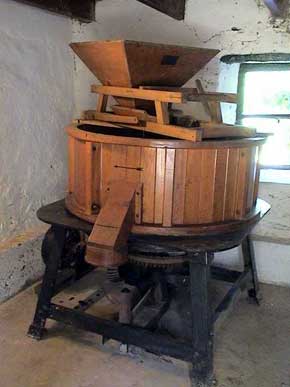 'Portable' mill made by Gutmann of Frankfurt am Oder in Germany.

I asked whether I might be allowed to come back and see whether I could get the mill going again. It has been standing idle for something like 40 years. I argued that it would be an additional attraction for the Wine Tasting, as this is a wine farm with its own brand. There are also two farm-stay cottages, one being the original Miller's house. Permission was gladly given and after spending four enjoyable Saturdays there, we milled for the first time!

Concentrating on the two 'Portable' mills, it was a question of selecting a suitable engine, making up belts, lubricating the bearings and freeing off the mills themselves. The Stamford was just jammed by the tentering wheel being screwed in too far. On the Gutmann, the tentering wheel was completely missing, so the massive runner stone was resting on the bedstone. The thread measures 25mm, and as there is no 25mm metric thread, it had to be Whitworth (not uncommon on older Continental equipment). So a 1" UNC nut was tried on the tentering screw and soon the stones were apart and the runner stone turning! Since then, a cast iron wheel-valve handle has been cut with the same thread and fitted.

The engine I chose was my Lister CE, dating from 1939. An engine I have had the longest, but which is too heavy to take to shows, so this affords it a chance to be seen and enjoyed, working for the first time since it drove a tar mixing machine made by Millars' Machinery.

Lister CE of 1939, 16 HP at 1200 RPM with 2:1 reduction gear and centrifugal clutch. Certain modern additions were made when I got the engine in 1979, like external oil and fuel filters and the oil pressure and water temperature gauges visible in the picture. The Lister fuel tank is a later addition.

While attention has been focused on getting a milling display ready for the Wine Estate's Open Days on 20th and 21st January 2007, a bit of preparation has been done towards getting the water wheel and Vitruvian mill going. After greasing the three axle-tree bearings, the water wheel now turns, although the launder to supply water to it has rotted away a long time ago, yet the supports for it remain intact. Inside, I have loosened off the shaft which drives the runner stone and made a replacement for the missing drive. Above the mill stones I have installed lifting tackle for the stones, the runner might easily weigh a tonne! Measurements have been made and a cooper contacted in the hope that a 'tun' can be made in the style of part of a wine barrel, as was popular at one time. 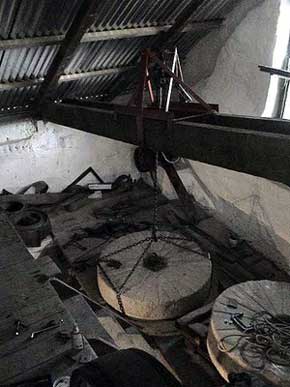 Lifting tackle installed and the bedstone raised to inspect the condition of the supporting floor.

I was not sure what size of pulley to fit on the engine. We had only one known speed, that of the Stamford mill at 450 RPM. From that it was possible to calculate the speed of the line shaft and all the other pulleys in the building. By pure good fortune, with the input belt running on the drum of the centrifugal clutch and with a twist in the belt, all the pulleys rotate at the correct speed, without tampering with the Lister's governor at all!

So we're ready for visitors on the Open Days, and hopefully many other occasions in the future, every time with something else restored and running!