I had planned to be at La Motte in Franschhoek helping Pietie le Roux set up their Mill, so that they can produce their own meal for the bread served at the restaurant on that farm, but the pump which is used to recirculate the water to turn the wheel broke at the last minute. I suspect those stones might need dressing, so I told Pietie I’d learn instead at Compagnes Drift and practise at La Motte, instead of the other way around!

Armed with James Walton’s book, some grinding discs and a ‘builders’ hammer, I got stuck in. On Pippa’s advice, I tested one of the broken stones outside, and it was immediately apparent that these ‘silcrete’ stones are hard! But first the ‘furniture had to be dismantled. This was surprisingly easy and within about 15 minutes, the stones were exposed. 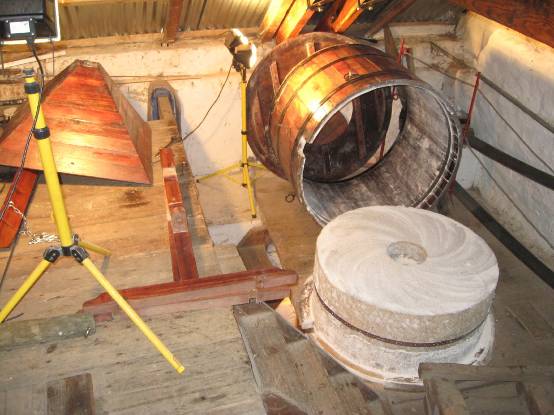 The ‘sweeper’ still had to come off; that’s the steel band around the runner. The piece of belting on the end of it has lasted well. I had brought chain-blocks (I drive around with four in the service van) so the next move was to hang the long one from the sliding cradle on the crane beams. It didn’t quite hang centrally, so it was necessary to cut off small pieces from the ends of the steel bracing on the crane beams, so the cradle could slide just that little bit further. 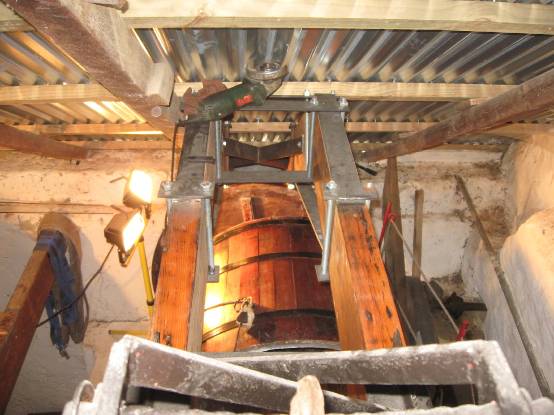 Then, using the tentering wheel, the runner just had to be raised by 16mm to fit the cradle I made before. I pushed in cloth pads to protect the upper edge of the stone from damage from the chains.

The rynd and the driving member are both painted on one side, for reassembly the same way around. I slacked off all four bolts on one side of the driving member, leaving the opposite set untouched. This way, I hope to be able to reset the runner with the minimum of effort. Without even thinking about the strength of the crane (this is its first use as it is now with the dog-leg in it!), I lifted the runner away with no effort at all! 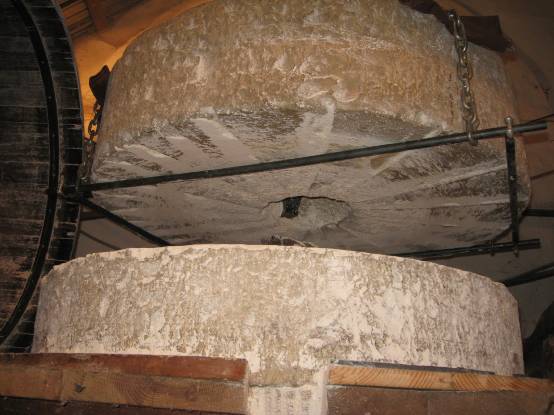 This picture shows how badly clogged the stones were! The bed-stone was the same. The sliding cradle slid easily with some help from another chain-block, anchored on a bar on the wooden stand over the wall, put there for this purpose. 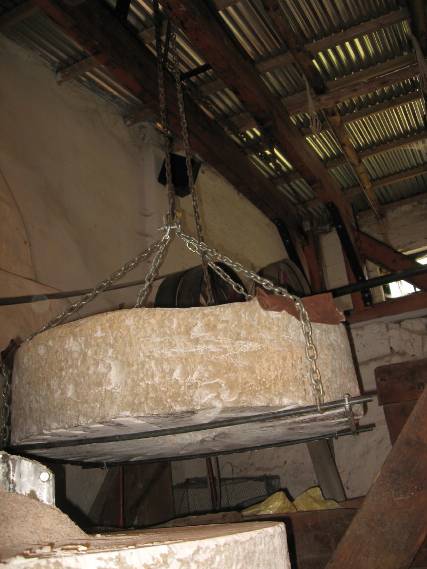 I could then put it down partly on the wooden ‘horse’ which it was lying on when I first saw it, and partly on wooden blocks on the bed-stone. Then it was easy to feed one of the webbing strops through the eye as shown in Walton’s book and lift it up on end. 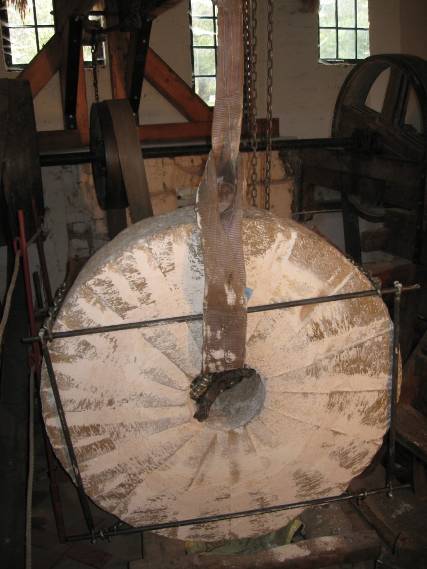 A bit of heave-ho was needed to get it to over-balance, then it was easy to lower it under control on to the ‘horse’, so it is now lying exactly as it’s shown in both Walton’s and Chester Staples’ books.

The picture below shows how badly the meal had caked on to the grooves. It needed a wire brush in the end to dislodge the last of it. It would be interesting to hear if anybody can offer an explanation. The grooves are still plenty deep enough; in fact I was very pleasantly surprised by the lack of wear on the stones after about a year of occasional use. Perhaps I milled a batch which was too wet, or too recently ‘conditioned’? 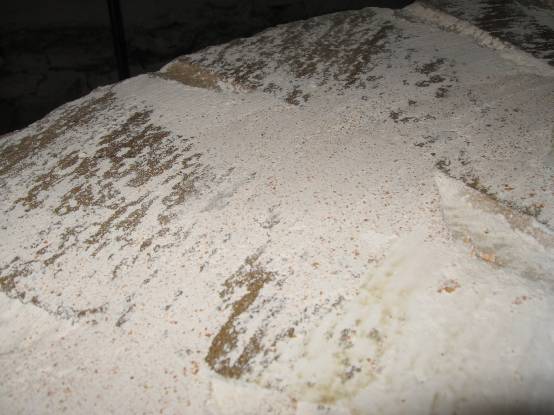 After cleaning the grooves, I could then try out the various ideas I’d been given regarding dressing. When the Dutch millers came to Mostert’s Mill to show them how everything was done, they said they use an angle grinder nowadays, hence my reason for bringing several masonry discs. I had also brought a diamond disc for the big 9” grinder. But first I played around with the builder’s hammer. All it did was to slightly roughen the sloping surface. Each groove has a vertical side on the leading edge and a sloping side on the trailing (grinding) part, so you can always tell which direction the stone is dressed to run. I used a piece of wood as a guide to slightly deepen the straight side, and on the grinding edge, rather than making the lightly-cut ‘cracking’ lines parallel  to the main groove, I picked up traces of diagonal lines in the old surface, and added to them. I have seen a photo of a stone dressed like this, so I was not particularly surprised. It all gives more cutting edge. 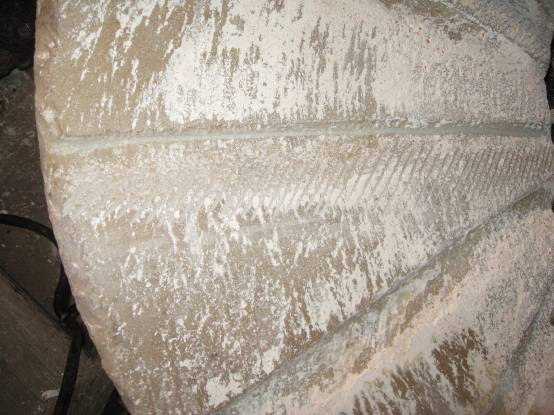 This stone turns clockwise as we look at it, so the diagonal lines will have a tendency to work the partly ground meal outwards. In Walton’s book, he states that these millstones had been opened many years ago ‘for dressing’. This is probably correct, as part of the runner has dagger-shaped extra grooves cut in the surface from the outside, about a third of the distance inwards, in the wide spaces between the main grooves. About a third of the gaps were so done, the rest not. So I carried on in the same vein, also cutting diagonal grooves across the sloping grinding edge. 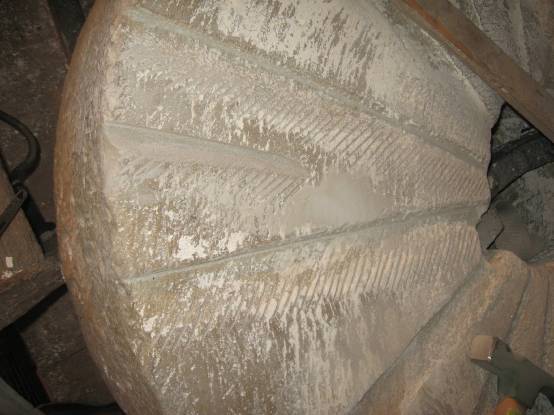 The straight edge was done with a wooden guide, the sloping part by hand with the grinder. With the next sloping edge, I tried with the big grinder and that tripped the circuit breaker, and I couldn’t get into Mill Cottage to reset it. I had already cut the straight side, and tried the builder’s hammer to chip away at the sloping part, but it simply is too hard!

I did have a chance, though, to look at the problem of the grain disappearing on one side of the eye and reappearing on the other. The area where it swallows the grain is where the join is in the cone I made to encourage the grain to the outside of the eye, so the stones can start working on it. 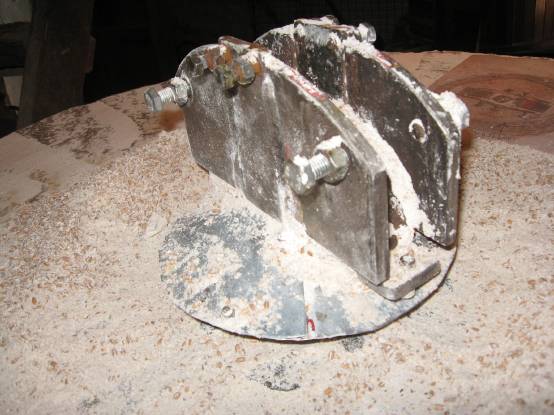 The cone was at its highest here. There was plenty of evidence that the space under the cone was full of whole and partly milled grain, so I suspect something to do with the wavy shape of the outer rim encouraged the grain to get swallowed here and ejected on the opposite side. I just bent the whole cone so that the space between the outer edge and the bed-stone is more even, and we will have to see if that helps. It might be an idea to fill the space underneath with something like cotton wool.

At that stage, I got a call from Pippa to say there’d been intruders in my engine shed, so without power also, I packed up and went home, disappointed that I had not got further with the job, but pleased to have worked out what to do.